Hello, everybody! Hoping that you guys have a great day or night, wherever you are!

I'm Mhane, an illustrator based in Manila, Philippines. I've been making art since I was a child, drawing various manga-style characters. When I entered engineering school, I had less time for doing art. But it was mid-2015 when my knack for art making has resurfaced through admiring a lot of local artists and attending a bunch of art workshops. Also, I learned how to paint using watercolor (and a few years later, gouache) and it has been progressed since.

It was only this year that I became more serious about making art. It began with participating with #the100dayproject (entitled #mhanes100artyexperiments) and I realized that it was a great opportunity to create more brilliant artworks that aren't only eye candies for the audience, but also artworks that can spark joy.

I've realized that I went back to my roots as I didn't only re-read W.i.t.c.h. (an Italian comicbook that was once popular in the 2000s), I also drew (and painted!) women in different situations and scenarios. Heck, I did a series of illustrations as a part of 2020 #WorldWatercolorMonth celebration!

And that's not all, I have just learned how to do digital art (in Autodesk Sketchbook). It may not be as messy as traditional art (which I have been doing for several years), but it's a very interesting medium to learn.

Thank you all for making time to take a look at my beautiful artwork showcase!

Of illustrations and life. 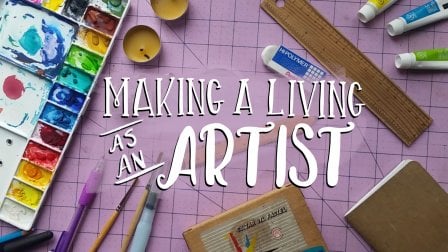 Make a Living as an Artist: Strategies for Crafting Your Creative Business
Brooke Glaser