Metaballs with a Twist

Here is an animated GIF of my metaball pattern. I was fascinated by the way the metaballs interact visually with each other and wondered if they could also each rotate with out interference with each other. If you have problems with motion sickness you might not want to watch this too long . . .

Although your method of creating the metaballs in Photoshop was very informative, I have to confess that I did not create these in Photoshop but rather I used the exact principles you demonstrated with the Pathfinder tools in Adobe Illustrator to create the basic metaball shape. I then used Cinema 4D to make multiple copies of the metaballs which I animated to produce this animated GIF.

Although I used Cinema 4D for this, it could have also been done in After Effects or even by hand using Adobe Illustrator and Photoshop.

Here is an image of the metaballs in their resting positions. 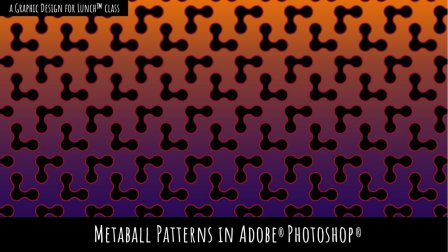