Kids in school these days often need help and/or practice in their math fluency skills.  For example, my son Matthew is in the fifth grade and each semester in school, the kids have to take the ISAT (Illinois Standard Achievenment Test) exams.  Matthew actually quite good at math, but sometimes needs a little work on math fluency - solving problems quickly and accurately.

To help him out, and other kids in elementary school, I'm going to create a math fact flash card app.  The app will allow the user to choose between addition, subtraction, multiplication, division, or all four at random.  To account for the user's possible time contraints, he/she will also be able to select how many questions they would like.  Once the test has been completed, the app will allow the user to scroll through the problems to review the questions and will indicate the problems that were solved correctly and which were incorrect.  It will also show a percentage of correct answers and the time it took to complete the test. 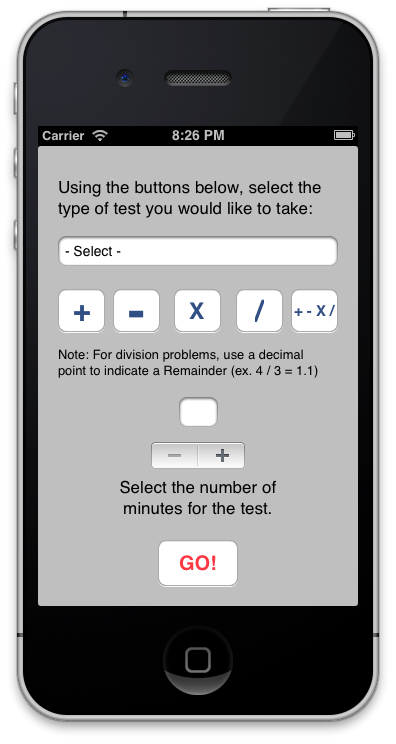 Here is the first screen of the app.  From here, the user will select the type of test that he/she would like to take from the options of Addition, Subtraction, Multiplication, Division, or a Combination of all four.  The most recent selection made (thus allowing the user to change their mind) will appear in the text box above the buttons.

Next, the user will utilize the stepper object to select a number between 1 and 5 as the number of minutes for the test.

Finally, the user will tap the "GO!" button which will bring the user to the next screen to begin the test.

(currently working on the next screen layout.  I think I need to look at Chapter 11).