I've been painting with watercolors for about a year now, but I haven't done much with masking fluid after I bought a bottle of Windsor & Newton masking fluid that a)had a defective twist cap that could not be opened by conventional means, b)I found this too late to return to the shop, c)I ended up carving the cap off (with a screwdriver and a knife!) and pouring the fluid into a jar, and d)found out that said masking fluid could not be removed after application to paper, even if it was removed within an hour or so of use.

It was not an experience that made me think masking fluid was useful.

I figured it was past time to get over that.

Unfortunately, I didn't remember that this masking fluid is impossible to remove until after I'd put down a layer along the edges of the owl's blanket and started masking the stars. So I'm going to practice with some other pieces to get a hang of this technique.

Edit: thought I'd update to share another piece where my masking fluid attempts were successful! 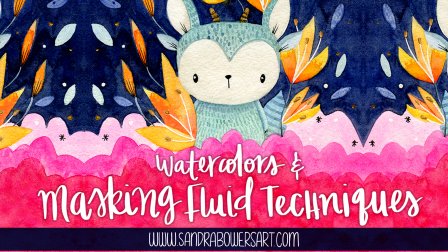