I decided to create maps of city Madona, Latvia. This is a city I briefly lived and studied in. I adapted these maps for my bachelors' final project. To make a series, I made 3 different maps that show the possibilities of entertainment in the city.

The maps were made in the Latvian language to fit the target audience of my uni project. I tried my best to translate some of the titles below :)

Created the background for the map using the biggest brush I had.

Google maps screenshot of the places I wanted to illustrate.

I decided to rotate the map to fit in more points of interest.

I used the brushstrokes for map title background and the light textures for map background.

The toughest part of this project was doing the calligraphy. I guess that's why all the text styles came up really similar.

I started by listing the places in my notebook and then travelling to the city to make photo references.

Here are a few of the photographs I took for reference and icons I drew in AI.

This is Madona Art School of J. Simsons. I studied here for 5 years.

Madona Town square - to see the precise time of the day.

"Madonas Maiznieks" is a bakery that sells warm bread, cookies, pound cakes and other tasty stuff.

For this project, I chose a color scheme influenced by the city's coat of arms. The red colored shield depicts the yellow colored head of a rooster turned to the right (as seen in Town Square illustration).

The first map is titled "Madona for Aesthetes". I illustrated 5 different places that everyone who loves art, music, cinema and culture should visit if they ever come to Madona.

The second map is titled "Stroll through Madona". I illustrated 5 different places that everyone who loves an active lifestyle and taking long walks should visit if they ever come to Madona.

The third map is titled "Madona for Gourmets". I listed 6 places where visitors can have a different gourmet experience starting from fresh bread to pork chops and potatoes.

While doing the bachelors project I thought it would be fitting to adapt the maps for postcard use.

Thank you for this class! 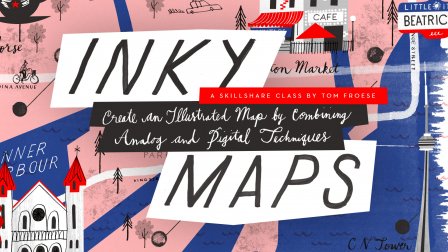