I  feel so silly now. For some reason, I misunderstood the assignment as to draw something I both love and never draw using the three simple steps. I'll submit what I've done anyway, and start thinking of something I never draw and don't love as well.

I love birds but struggle to draw Australian magpies. I find they I tend to make them look either grumpy or menacing (it doesn't help that they sometimes attack people and other birds so they can be a little bit scary). And then with the black and white, I get confused and sometimes start colouring in the wrong parts black, or even colouring outside the bird. I make so many mistakes. So I've never managed to draw a picture of a magpie that I really like.

For the assignment, I watched videos from The Magpie Whisperer on Facebook. I practiced some drawings like this:

Then I paused this video https://www.facebook.com/themagpiewhisperer/videos/1179385338822283/ to get my reference image and drew this as my final picture (for now at least). I'm pretty happy with how it turned out. I used black ink, white ink, and gouache.

Thanks for the great class. It's given me a lot to think about. I guess I do tend to rush into drawing details and painting, without really being clear about what I'm drawing. I find it so hard to process a lot of information at once, so I tend to just move on from the first step when I get overwhelmed by information. So often it's not clear in my mind until I've drawn the same thing a few times. (Like here I didn't realize which parts of the middle magpie were the wing and which the tail until I'd almost finished painting.) That's maybe my favourite thing about drawing. I don't see things properly until I draw them. But I'll try to work on spending more time observing and working on Step 1.

I really like your picture of a giraffe. I found it really interesting how you change the markings a little bit, and see that some details are more important that others. I think seeing which details are important and which aren't is something I would like to work on. 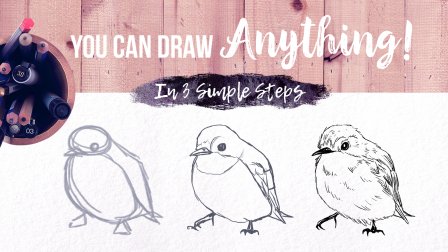 You Can Draw Anything! In 3 Simple Steps
Yasmina Creates