Step 1 was to begin with a list of seemingly unrelated words in Roman's style. If this helps anyone else, please take a pair!

Step 2 was to make a few desirable pairs, then to map out associations.

I most liked "magnetic puddle," for the colors and playful imagery. The term could be fun and playful, but it actually made me think about mental illness. If a parent has mental illness, their child is still attracted to them and relies on them - might not know how to understand the situation.

Step 4 was to create a finalized image... I relied way more closely on my sketch than Roman's example. I think it's okay, but I like the idea of feeling loser, because it does seem like the first time doing something is always the best in your head.

I don't think I pushed myself too much technically, and still rendered most of this digitally in my usual way... don't know anything about value... I admire Roman's use of inking brushes, though he definitely makes it look easier than it is for a beginner! A lot of the example project rubbed off on mine... character in a coat, rain, even some purple color.... I wanted to try drawing those! Though the goal of this exercise for me was not technique, but thiking conceptually. My favorite take-aways: 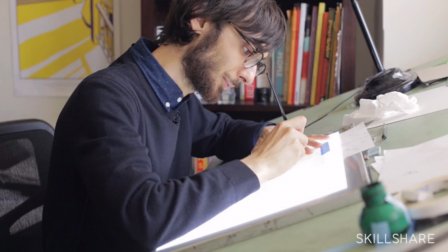