Okay I'm uploading little by little this time and not all at once!

Alright so first I had to come up with a story. I don't usually do this kind of thing so bear with me! And yes this story is definitely inspired by Calvin.

(And please help me with the names if you feel like it!)

Once upon a time in a world where magicians and non-magicians got along as well as anyone could expect them to, a witch and a wizard had two children.

A girl, whose happiness and joy, filled her parents with pride. She was born with strong tattoos signalizing that she would become a great witch one day. Everyone knew her smile and butterflies favored her presence.

Five years later she got a little brother. He was a cute as could be with curly hair and small dimples. She was overjoyed, but her parents sat her down and with a heavy heart they told her that he was born without tattoos, and would never be able to do magic.

As they grew together she would often entertain him for hours with her tricks and trickery, but while she forever grinned, his laughter died, and his smiles faded. He was unable to do any of the things that she could.

As time went on he would study and replicate everything that she could do with science. He even replicated the butterflies that followed her with a little flying companion of his own. But, as their parents said, it wasn't quite as elegant and beautiful as the butterflies.

And she remained too carefree and joyful to notice that they stopped playing a long time ago.

So I wanted to draw her happy, carefree but also fond and protective as only big sisters can be. Here's the sketching phase on one page and the refinement on the other:

I also reeeeally liked this girl, so she is now the big sister's best friend:

For the brother I wanted someone young, nerdy and sciency! ... and not someone who looked too much like Calvin or Dexter XD

And I ended up really liking his little robot companion XD

And then to the part that I was most excited about! Testing the characters! I never redraw any of the characters I make so this was a really awesome challenge! I think it went okay

So that was it! Thank you for the awesome course! It was really fun to "invent" the characters and kind of getting to know them before you knew how they looked! And of course (if by some freak accident that Jazza actually reads this XD ) thank you for the great supplies from your first art box! It was super useful and has been for quite a while!

Thank you if you've read this far <3 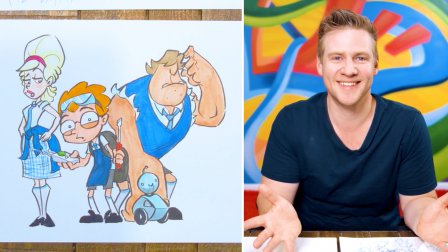