Made of the Minerals

Starting this project, I had no idea where I wanted to take it. Rather then wait for the ideas to come, I started to look at images and let the ideas grow from there. I knew that I did want to keep my colleges simple; no more than 2-4 images unless it just really worked.

I wanted to include animals with my crystals. I collects a ton of pictures that I'll probably use for other projects, but ultimately decided to use these images of a butterfly and a hawk.

I wanted to make it look like the butterfly had just landed on it's crystal and same for the hawk.  After making my cut outs of all my images and placing them together, I started to play with the levels and colors.

The butterfly looked like it had been just pasted onto the rock and I missed the beautiful shadow it had in it's original image. Layer effect drop shadows weren't really giving me the look I wanted so I did a black fill on another layer and applied a blur. Then nudged the layer so it was offset just a bit from the butterfly. I liked the result and ended up using the same process for the hawk when I perched him on his rock.

There felt like there was still something missing. I searched through my images and couldn't really find anything that I felt like would really add to either collage. I opened up a vector pack that I had purchased a while back and liked the geometric shapes I found. I placed them in and then changed all my backgrounds to black for the final image.

Still think I could push the design a bit more but I'm still happy with the result. There's more collage ideas I've had since and I will be working on them next! I appreciate any feedback anyone would like to leave! Enjoy! 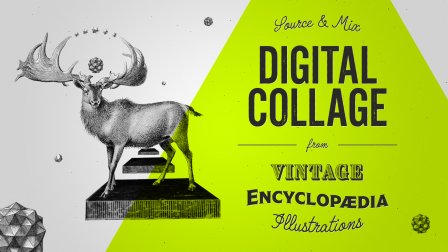