Summer lasts forever here, which is one of the reasons I miss home. Maybe the only reason. Long after the weather should have dropped and the nights should be colder and sharper and the mornings should be darker and soothed with mist, the air is still hot and thick and dull. It has weight when it hits your skin: the feeling of sweat slicking your lower back.

Hanna moves into my house in late spring, and by the end of summer I’m in love. She has the room on the top floor, with its hard, wooden floors and diagonal shadows, its dappled, shifting sunlight. She brings an antique bed, cardboard boxes heavy with art books and a big, sad-eyed black dog. She wears lipstick the colour of blood oranges and her hair looks good even when she cuts it herself. Her tattoos suggest an impulsive streak. On the first night after she moves in, she asks me questions with such guileless ease that I find myself revealing details of my life that, under normal circumstances, I would hesitate to tell my closest friends.

I think: I need to be careful around this girl.

We buy perfume together: a dark, animalic rose for me; and for her, wild lilies in the basin of the Mediterranean sea. We go to a concert where the singer wears a gown sewn with diamonds, and no shoes, and I’m so overwhelmed that afterwards, I almost kiss her, under the stars. Every Sunday morning, we have coffee together. At the café, we talk, or we don’t talk. We sit. We drink our coffee. Time slows, or maybe it quickens. This is the way love happens.

In text messages, she nicknames me “chicken.” English is her third language, after Polish and Greek. On the phone, to her brother, her rapid Polish has the lilt and cadence of birdsong. It sounds like an orchestra running through scales before the conductor lifts his baton and the hush of expectation stills the audience. In English, everything she says has the quality of something run through Google translate if it were written by Anne Carson. Musical in its oddness. Her manners are formal, foreign. She is generous with her money to the same extent that I am uncomfortable with it: Oh please, she says, if I try to split the bill after dinner. I wouldn’t dream of it. And if I persist: Please, you’ll embarrass me.

Hanna is mostly estranged from her family, all except her younger brother. The two of them are close in a way that both embarrasses me and makes me feel ashamed of my ambivalence towards my siblings. In place of the family she was born into, she has a family of her own making: her ex-girlfriend, Harriet, with whom she remains close, her brother, Jakub, and her boyfriend, Daniel. We all revolve, like satellites, around her.

Daniel has a long, serious face and long, coltish limbs. He is training to be a carpenter. He is softly spoken, and wry, and I am so jealous of him that sometimes I can’t breathe.

When he cheats on her, somewhere in Europe with an older woman, Hanna retreats to her room and I don’t see her for days. If she cries, she cries in private. When she emerges, she’s angry. She spits venom at him, halfway around the world. They exchange long emails. She gives me some of them to read, and I do so with the thrill of broken privacy making me weak at the knees. Feel my pulse. See how I radiate.

Daniel comes home. They talk. She tells me that they’re trying to make it work. It’s summer again, and the magnolias are dropping armfuls of white petals all over the street, and the air smells like rotting sweetness.

Weeks pass. I stay close to her. I feel certain that they will break up. Instead, Hanna calls me and says: Daniel and I are engaged. We’re celebrating tonight, will you come? So we go out to dinner to celebrate, all the satellites and I. We offer congratulations. Hanna wears a silk dress the colour of the ocean where it’s deep enough to drown in. She sits under Jakub’s arm, and leans into his shoulder. Harriet says little. I bring lilies, which leave yellow pollen all over the tablecloth. Despite everything, Daniel looks happy.

After dinner, Hanna and I walk back to our house in the mellow, end-of-summer evening. Just the two of us, and all the things we’re not saying. When we get home, we linger in the hallway next to her bedroom. Eventually, she says: It’s about committing to the relationship. Committing to each other. She says: Just because we’re engaged, it doesn’t mean we’ll get married.

And then she says: I don’t want to be alone tonight.

I never feel quite like myself at night. I feel most like myself in the early hours of the morning, when things are at their least complicated. And so: I do nothing.

Lying next to Hanna, in her bed, I commit her profile to memory. Black fringe swooping down to touch her eyelashes. The moue of her lips in the deep, even breath of sleep. The way one arm is thrown back behind her head, and a smudge of mascara is bruising her inner elbow. I am as close as I’ve ever been to her.

If I were to roll over, the backs of our arms might touch. I could curl into the space between her body and her outflung arm, I could slow the pace of my breath to match hers. She is still wearing the dress she wore to dinner, and one strap has slipped from her shoulder and dangles like an open parentheses. She looks vulnerable in the way that all sleeping people look vulnerable.

I don’t sleep. I don’t move. I listen to her breathe.

By dawn, the air is hot and thick and dull. I feel feverish. I swing my feet down to the hard, wooden floor and step softly from the room. Outside, it’s cooler. Grey morning light. Morning is the time when things feel their most possible. I splash my face with water, bent over the sink, and come up feeling sure.

When I open the door to Hanna’s room, I see the blankets pushed back into a wild tangle at the foot of the bed. The fitted sheet, exposed, shows the ghost of where we lay.

Hanna is standing in front of the mirror; eyes rubbed clean of sleep, hair swept up into an efficient topknot. She’s changed her clothes. She says: How did you sleep? and her voice is bright, and brisk, and final.

First, thanks for reading. I have a couple of questions, and would love to get some feedback.

- Do you think the ending is too abrupt? I took Emily's advice and cut out the final paragraph of my original draft, which leaves it on a more ambiguous note.

- Did you "get" what the mistake was?

- Any feedback or constructive criticism? 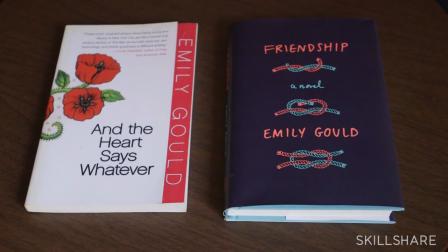