This is my first version for the pattern. It has more red and the cup of tea. In the second version I made all the building and the bus in the same colour just to try, I also removed the cup. The main problem that I had was with the edges between the outlines and the fill color, it seems to have like a pixelated edge. Also the original background is orange but when I uploaded the image it was pink, it doesn't look too bad anyway. The course was super fun to watch and to practice. I liked doing the pattern converting the main motif into a symbol and will it use that technique it in the future.

I uploaded the file with the orange background, which one do you prefer? I also have done a design for the stuffy toy, it is a bit simple but it was interesting to do the two sides :-)

For the bag I have done a design inspired in Samarra's bird but adapted to London :-) 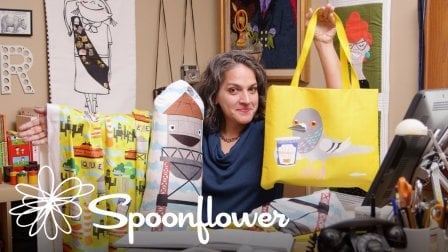