London - Places I Recall, Now Gone / Imaginary Map / The World As I Knew it as a Child 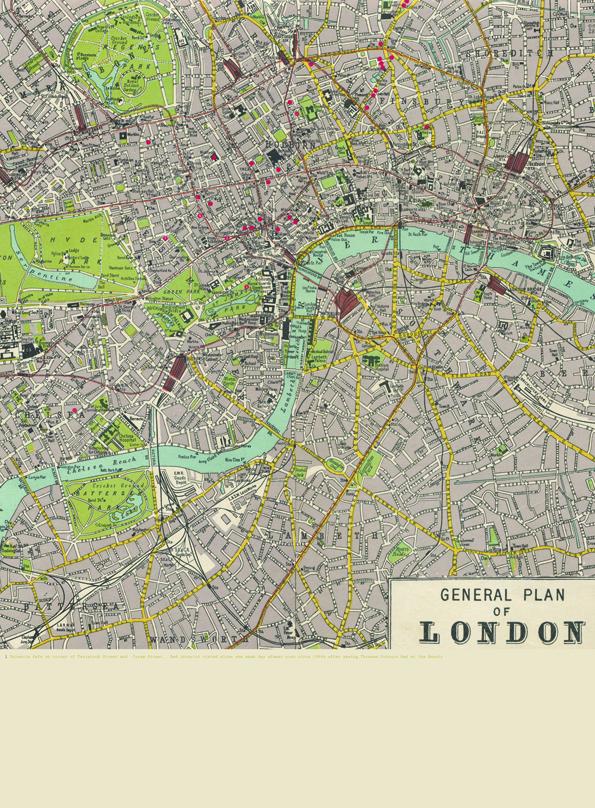 I haven't yet finished this map but posting it here in the hope it will make me get around to completing!

The idea is that the red dots all mark places that are no longer there but that I remember from the twenty six years I've lived in or close to London. Shops, cinemas, museums, galleries, cafes, restaurants, a bridge...even two hospitals(!) that have closed down but for a while atleast where part of my connection with the city and part of my mental map of London.

I listed around 60 places and more keep coming to me so the problem I have is finding a clear way to show all the information. I bought this old map of London in a junk shop in Brighton last week however I may need to zoom in alot more else all my red dots will be piling up on top of each other as I have lots more dots to add! I scanned it into Photoshop. The idea is each spot will have a number and below the map I will write the name next to a list of the numbers. I think I will sometimes write a little bit of memory about the place. The map is for print not digital.

I did think of drawing a map - (as that was one of the main things I hoped to get from the course - to create a few new hand drawn maps) but this doesn't feel right. This project is about my connection with an ever changing enviroment. An environment that I dip in and out of and changes over time. To hand draw it would be putting to much of a personal stamp on it.

My partner got really excited and also started listing all the places that he remembers that have now gone (lots of camera shops, comedy venues, dvd retailers and fast food places!) It's interesting to compare and see where sometimes our lives may have overlapped in the years we both spent in London before we met. 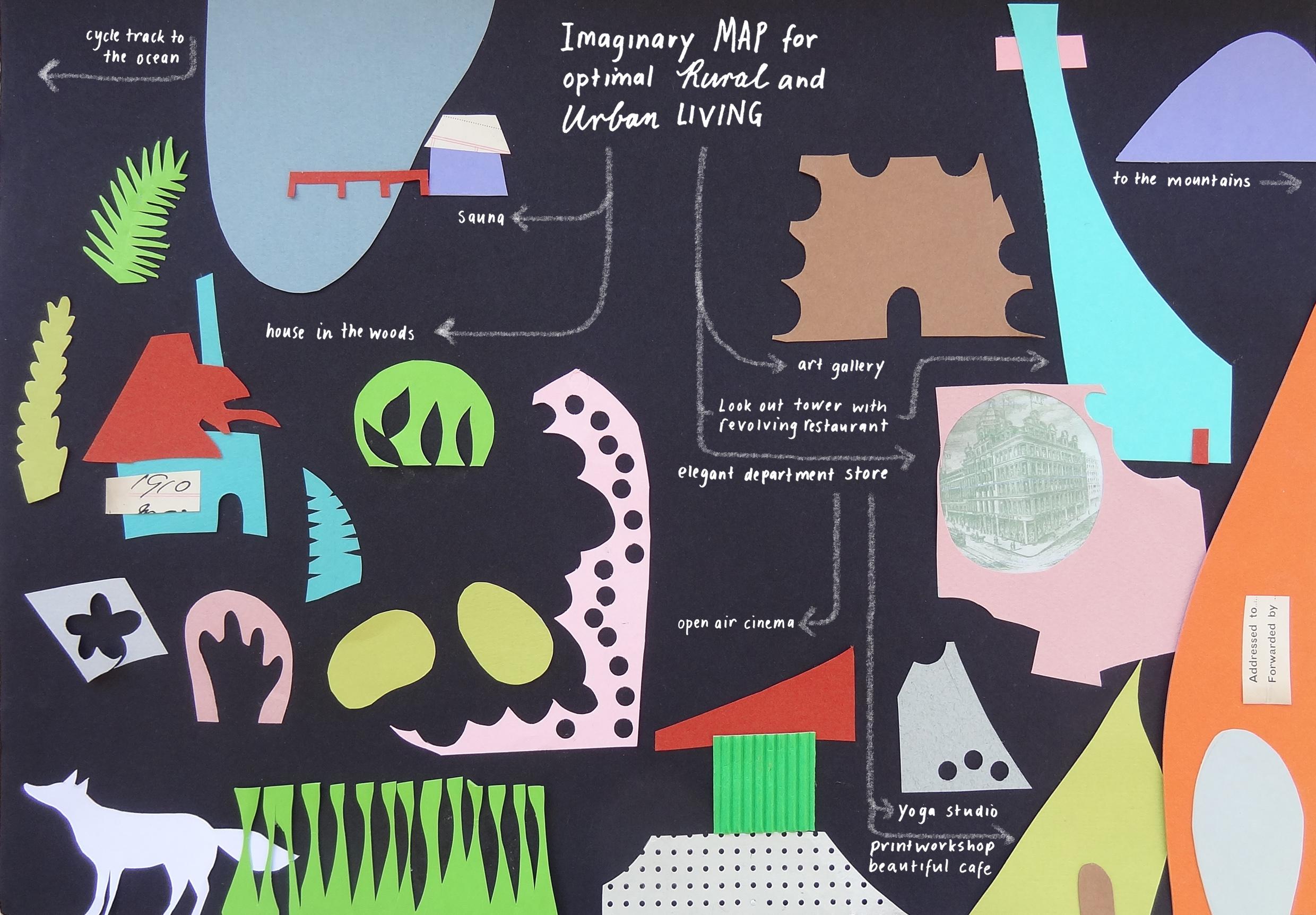 The project of making an imaginary city/location from random bits of cut paper was perfect timing for me. This week I've been working on a commission where I make paper props and backgrounds for an origami craft book. I usually either sweep up the off cuts and put them in my recycling basket or keep them in my drawer of favourite bits of paper for future projects.

My partner and I talk often about where we'd ideally like to live - usually I say in the countryside but with a Waitrose and the Victoria and Albert Museum close by! He'd like lots of places for cycling and a good bookshop.

I only thought about the labelling after all the paper places was stuck down - probably not the way a cartographer would approach it!

The World As I Knew it as a Child 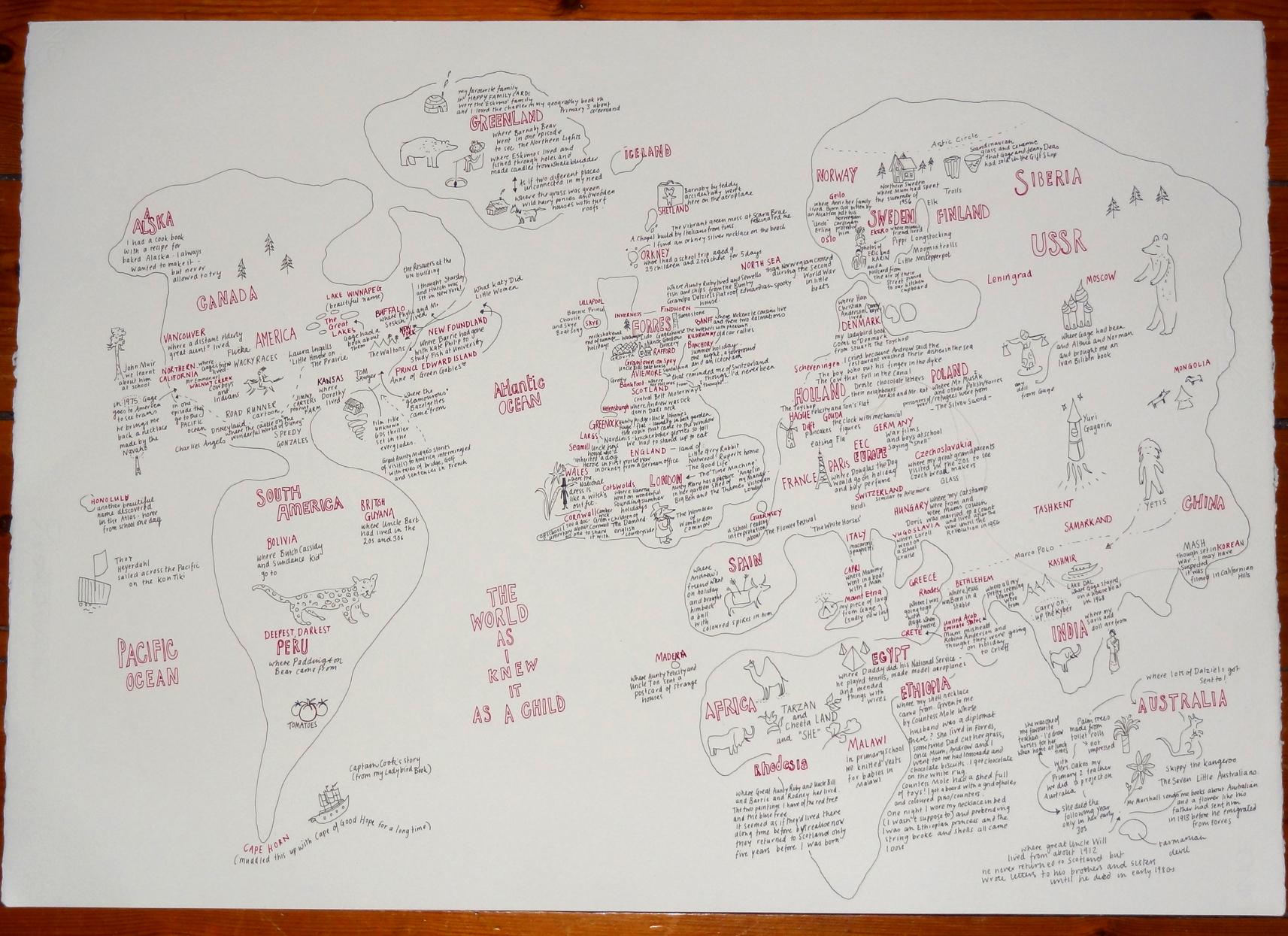 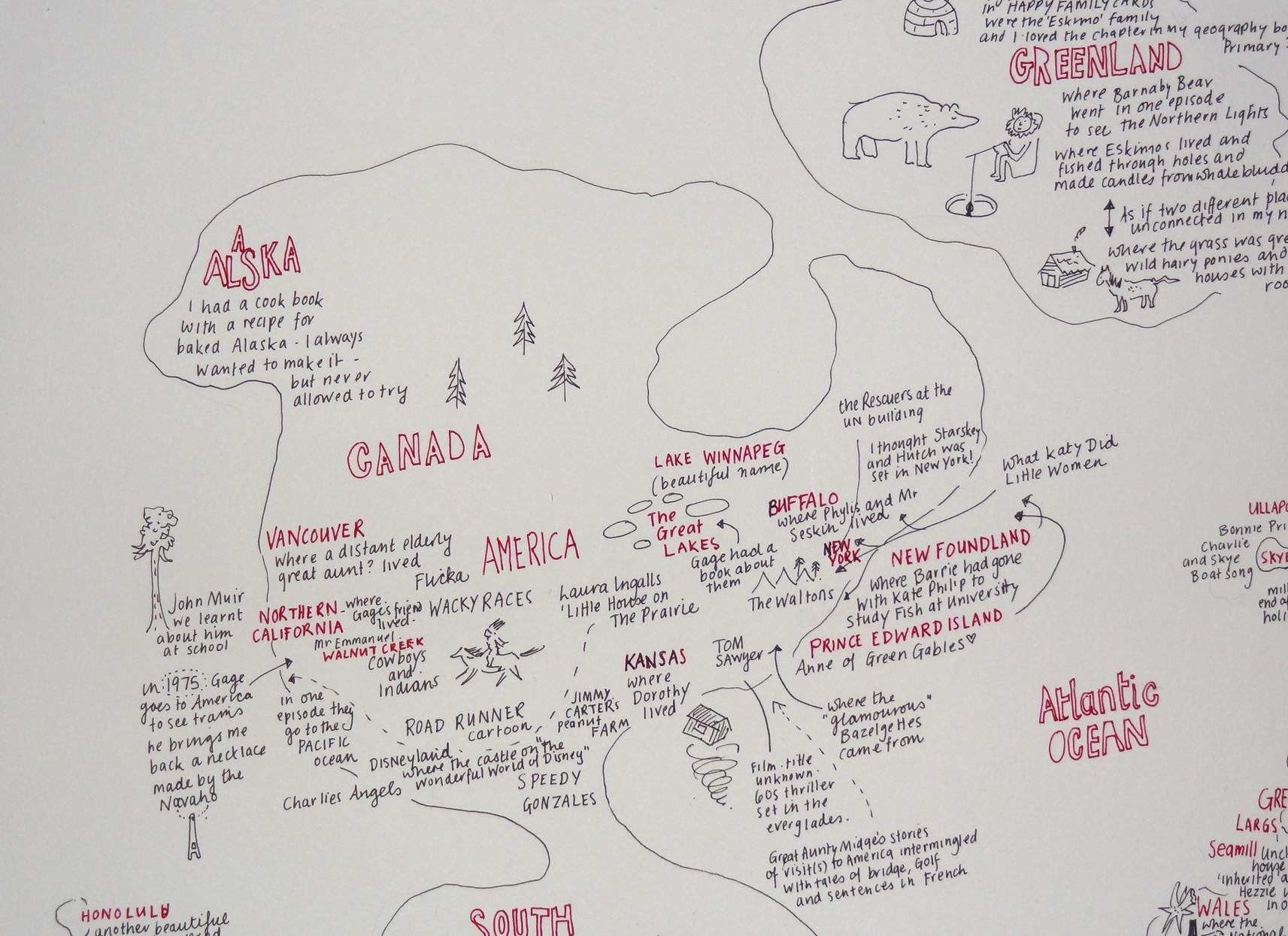 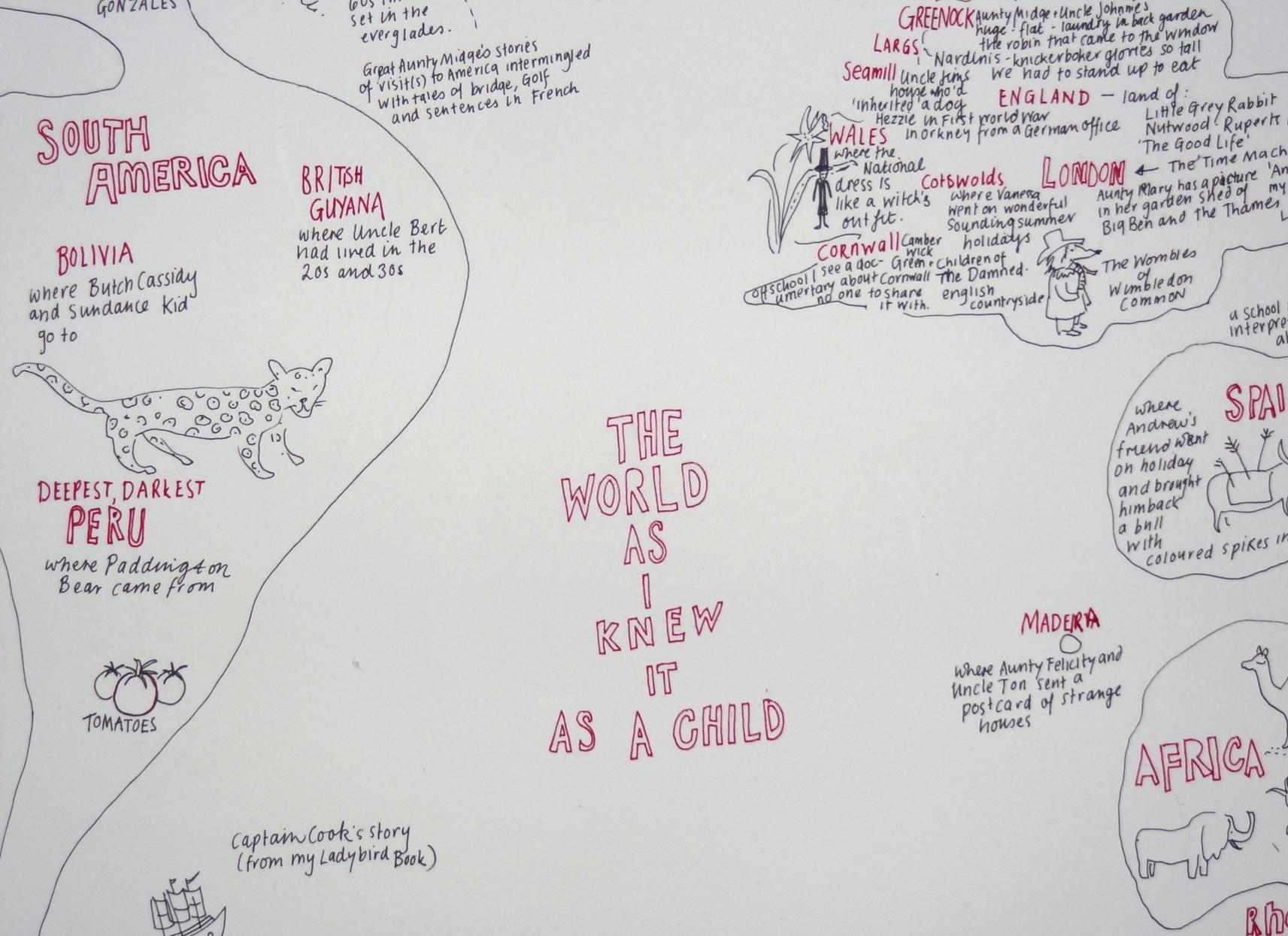 This is my map worked up from the sketch/rough below. I drew it up on an A2 sheet of paper using red pen for place names and black for info. (Poor night time photographs!) I am tempted to add some sea/contrast between sea and land but apprehensive to muddle with it now - I did it in one sitting and feel maybe it should stay as is.

Part of me wanted all the information to be "correct" but of course it can't be - it's subjectve and it's probably distorted by memory and also by misunderstandings at the time as a child. After I'd completed the map I checked some details with my parents by phone today and discovered several "facts" that I had got wrong/misunderstood - for example my Dad's distant family  didn't get transported to Australia but chose to emigrate! It was hard not to correct everything that wasn't accurate  but that would have defeated the purpose of doing it as a "child's eye view". It was also hard doing it so retrospectively to have a cut off time. Most things are before I was eleven but a very few things are from my early teens. Mostly seven/eight years old.

I loved doing this! It always surprises me when you start to recall and record the past how much can come back to you that seemed long forgotten!

I want to make a map showing what I knew of the world as a child - from personal contacts, books, films, school etc. It's going to be totally out of proportion as I have so much to fill on a local scale the few miles around my home in Scotland and then vast areas like South East Asia that I knew nothing about. I had a pretty good idea of where countries where by about nine or ten years old. Whenever I was off school with bronchitis (which was a lot!) I'd read the atlas. But I think I might draw this out of proportion to show emotional/personal weight....or perhaps I'll draw it correctly but just fill up some areas with lots of writing. ANy thoughts or suggestions anyone....what would be the best way to show so much information clearly? Thank you!

Since posting this I watched the west wing clip and the radio clip and reminds me all maps are to some extent inaccurate or not totally accurate and also subjective....so I feel less concerned about how "accurate" I need it to be!