This is going to be an interesting project. After watching Tom's great set of videos on design in general, and spot illos in particular, I sat down to think of a theme. Writers are often given the advice to "write what you know," and the first thing that popped into my head was my lifelong battle with depression.

I tried really, really hard to come up with something else to work on, but anything else I came up with seemed unsatisfying. Lists of simple objects and abstract ideas sprang unbidden to mind, and the lists pretty much wrote themselves. Clearly, I need to get this out of my system.

So here I am, working up illustrations based on a topic I'm intimately familiar with, but extraordinarily nervous to share with the world. I don't expect this to be an easy journey, but it feels right, so I'm going to take a few deep breaths and dive in.

These lists are far longer in my journal. Mental health issues are a broad topic, and there's easily enough material here to feed more than one Skillshare project. Learning to focus on what is important is a key part of tackling both design and depression, so I've narrowed the lists down to six apiece. This should make it easier when I start sketching to further narrow this to four illustrations per list.

Tom's optional step of imagining a context for the illustrations helped immensely with the abastract list. I'm picturing List B as section headings in a guide to living well with major depression; they could even be chapter headings in a longer book on the topic. Without a brief and a real piece of prose to attach these spots to, building a context feels necessary to this entire process.

So, off to making some art. I like to work from reference initially, which meshes nicely with Tom's process of sketching first from reference, and then working from memory to develop the style. I image searched for tissue boxes and sad people to draw; I worked from life for the pills and journal illustrations.

Some things came out easier than others in the thumbnails. For example, I only drew one tissue box, and I didn't feel it necessary to develop it much. It's not a complicated object, and one of my reference photos had a perfect angle and an interestingly crumply piece of tissue.

I wanted to do a few ideas with the pills. I'd originally just thought to do pills only, but the bottle with the pills is a more interesting composition.

My journal, both open and closed, was another easy one.

As for sad faces, it turns out it's actually kind of fun to draw sad people. I've recently picked up some great pointers for drawing emotions (Gabriel Picolo's "Character Illustration" class on Skillshare is fantastic), so I drew a lot more than I needed, simply because I was enjoying it.

I played with the idea of a full-body picture of someone slumped over, but it looks more like a somnambulist or a zombie. I also sketched out some ideas for someone in bed with the covers drawn up, and someone at the bottom of a pit.

Ultimately, I narrowed it down to four images that work out best as isolated, borderless spot illustrations. I could create edges for the bed and pit images, but the other four have natural borders already, so they won out. I also decided on one of the simplest, but more realistic, faces. I planned to flatten things a bit in the style, but I still wanted some dimensionality to the work. I also wanted an expression that conveys despair, but not outright agony.

I'm using Affinity Designer, so my first step was to pull the sketches in as raster images, ready for some tracing. I'm showing the process for all four illustrations at once here, but I worked on them one at a time, in isolation, then displayed everything so I could firm up similarities across the set.

I wanted a little more precision on the pill bottle, so I laid in some ellipses and lines to serve as construction guides.

My usual next step is to trace outlines, either in vectors or with a brush on a raster layer for more expressive ink-like effects. I do a lot of line work, but I wanted to steer away from that and build these illustrations up from shape, instead. So I went directly to vectors and built up flat base color areas.

This is also where I solidified my palette. I started with the orange of a pill bottle, then grabbed a complementary blue to contrast with it. Apart from black and white, various tints of the orange and blue are all I used, and I tried to limit even that much variation. I've outlined the white areas here so you can see them, but I removed them from the composition as I filled in more details to imply the outlines.

After the flat color areas, I worked in some details.

Some of this is for better shading, to give objects more dimension. Other details are there to make the objects read better, and in the case of the face, convey emotion.

The lettering on the pill bottle took kind of an embarrassing amount of time, because I wanted it to be recognizable for what it is, but I didn't want specifics, like names of people and drugs. I started with two paragraphs of lorem ipsum filler text, spaced the letters apart by increasing the tracking, then flipped one paragraph upside-down and laid it over the other. This gave me a nice base of gibberish, but I had to convert it all to curves and kern it by hand, because the spacing was still terrible.

Then I skewed and squished individual letters as I placed them on the label of the pill bottle, using one of my construction ellipses as a guide. I'm very happy with the effect, even though it required so much effort. It might almost have been quicker to build a 3D cylinder in Blender and wrap the text on as a texture, then render that and pull it into Designer.

The text in the journal required some fiddling, too. I wanted to have recognizable date headings, to match my actual bullet journal, but with handwritten scribbles for the rest. Normally, I'd have been happy to lay out some guidelines and just write it all on a raster layer with a brush, but the dimensions of the project file only give me 900 x 900 pixels to work with. Scaling brushes down enough to make tiny text looked poor at that resolution, so I switched over to Affinity Photo and made text at a larger size. I shrunk it down and reshaped it to the contours of the page using the Mesh Warp tool, then copied and pasted the results back into Designer.

The last step was to dirty up the clean vector work a bit. I used a slightly distressed halftone brush on raster layers, set to mulitply mode at various levels of opacity. This added another layer of dimensionality, and helped break up the perfect linework and make it more interesting.

Overall, I'm pretty happy with the results. I was worried that the halftone would be incongruous against the clean vectors, but I rather like the effect it has. I'm looking forward to the next four illustrations. 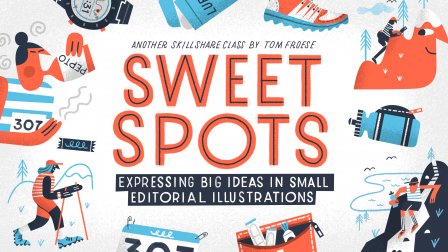