Oops, so I only found out about the more detailed project assignments after finishing, so my character isn't holding a basketball! She could be around 10 years old though, so at least I got that right ^_^'

I had so much fun thinking about how I'd like my Red Riding Hood to look!

It started with this sketch.

She looked a bit too much like a teenager on the left, so I gave her a simpler dress using a basic triangle shape.

This one's much more cartoon-like and she looks more like a child. I made notes on what I liked about the design as I went.

After trying another couple sketches, I ended up really liking this one. She looked like the curious, naive and positive girl I'd imagined her to be.

So I went and sketched her in another six different poses.

Then I picked the one I liked the most; the "Suprised and scared Red Riding Hood". I liked that it tells a story more than the other sketches.

The next assignment was to draw light. Phew, this was a hard one for me! I only did four, because I couldn't think of more interesting light sources and wanted to move on to the actual drawing.

From these sketches I picked the one that made most sense to me for being in a forest scene and I made the black and white drawing.

Woah, I was so surpised what the black and white image under my colour layers could do with the design! It brought so much more depth than my usual drawing method. (Which is just painting with a brush on one or two layers, using different shades to create depth.)

I'm really proud of myself for actually finishing a piece! I haven't done that in a loooong while.

Thank you Sarita for this awesome class! Next time I'll include a basketball. 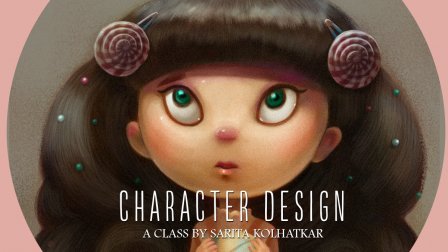