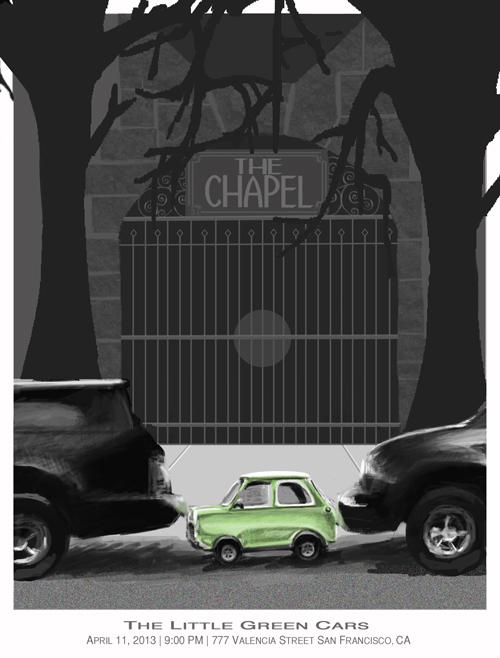 - I've been playing with darkening the background to make the foreground "pop" more. I kind of hate the trees more and more--planning to experiment with more abstract shapes and see how that goes. 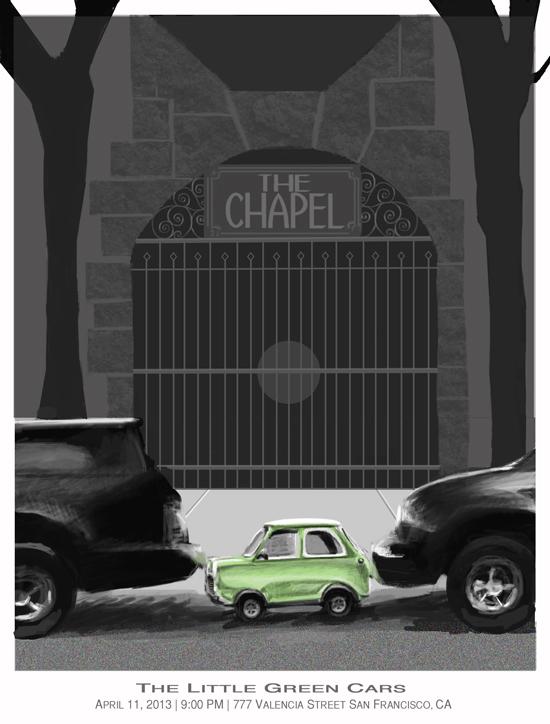 - straightened and sharpened the image, added some texture. I'm still not happy with the trees. I'd also like to add tree shadows or some other organic shape to break it up a bit, but I'm afraid that will get too busy looking. More experimenting... wish I had more than Photoshop elements to play with! 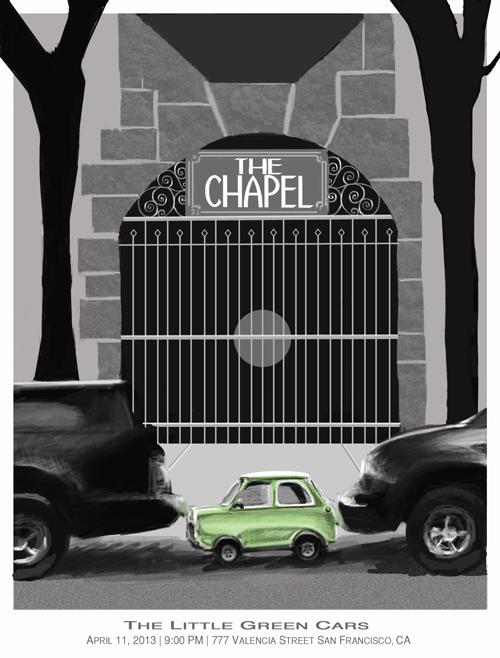 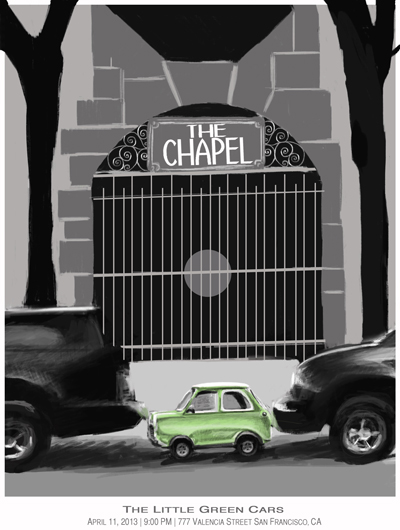 - consider and mess with fonts

- consider increasing white border to emphasize trees trailing off it

- consider hanging "doors open at 9" sign on the gate

- consider straightening the whole thing rather than have it on the proverbial SF hill, or exagerate hill? But Valencia is not a hill

- experiment with the tree shadows

I wanted to do something very local to give the class some personal relevance, so I just looked at the calendar of a new-ish music venue--The Chapel--nearby and found this band playing in April. I like them, so I went with it.

Little Green Cars is a folk-rock band from Dublin that does five-part harmonies. They are very young--about 20 years old now--and their songs are about becoming adults, falling in-and-out of love, and such.

The art they use to represent themselves is playful and hand-drawn. Even this Celtic knot-like design they used for a song is scratchily hand drawn. That said, despite the rough edges, it's mostly simple and clean, and centered art they use. 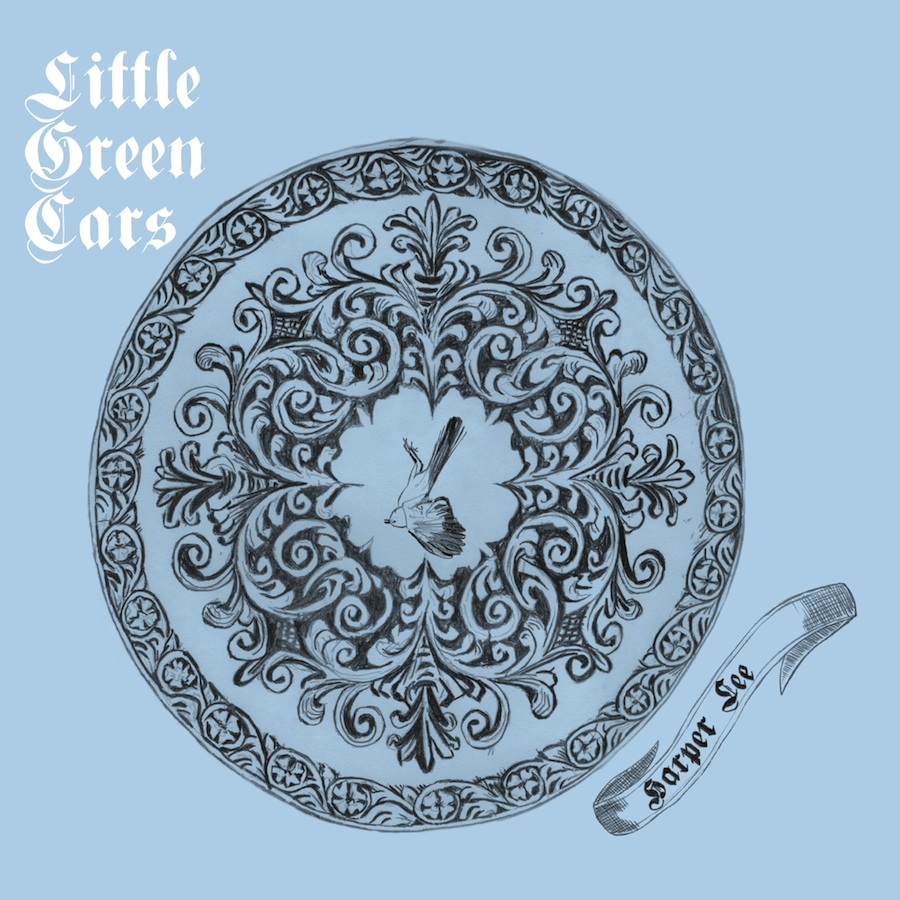 So I am an absolute newbie at design--really stuggling with concept-ing, but here goes:

All of the sketches I did are aimed at merchandising.

Sketch 1: My first concept may just be too literal. I used the acutal venue--the distinctive Chapel door--and the literal representation of the band's name--Little Green Cars. It shows a tiny, European, green car, parallel parked between two dark suburban SUVs. The concept is to juxtapose the heavy formal elements of a chapel with the small, more casual expression of the band. The European car represents the European band, awkwardly super-imposed on an American street--I thought this image of little cars and parallel parking would resonate with possible SF-based fans. It is too dark for the band in monochrome--in later stages I would punch it up and simplify it--something like DKNY's Mavis Staples piece, but less pink. 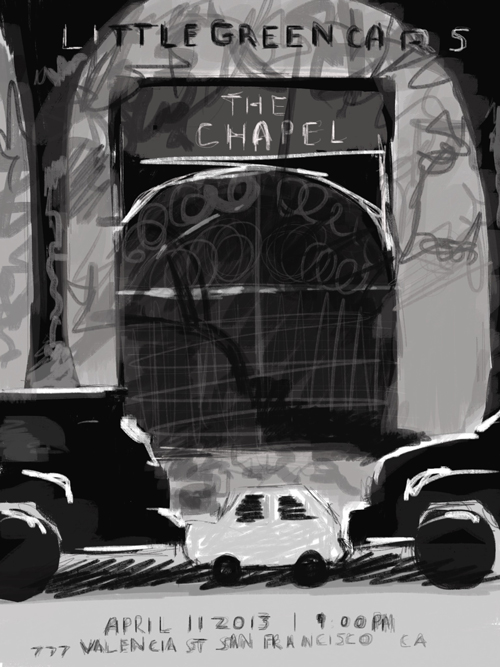 Sketch 2: I played around with the concept of jumping off things as a good metaphor for the trials and tribulations of love and youth. The album that Little Green Cars is touring now is called Absolute Zero. It's supposed to depict a person cannon-balling into the water, just after they've entered the cold water. I've made the sketch very dark, but I think lighter colors--icier--colors would make it look more appropriate. I'd like to leave the piece pretty simple and sparce, with the text simple, small, and on the bottom. Based on existing art by the band, I'd worry that an off-centered composition like this would not work. 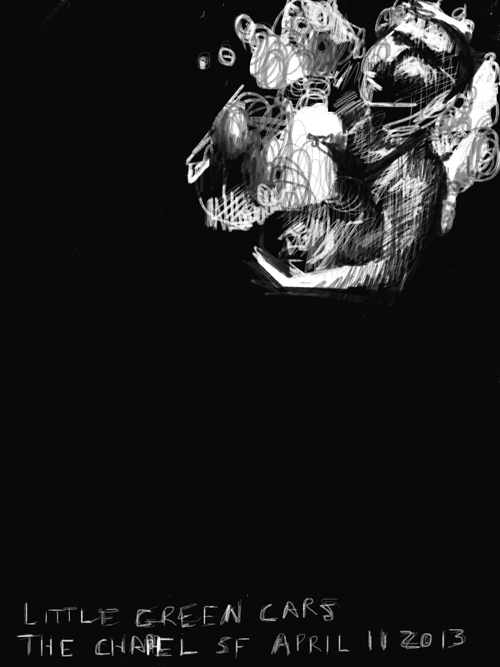 Sketch 3: A number of the band's songs include gun imagry, so I played around with gun-related concepts even though they are not very San Francisco-friendly. I wanted something a little simpler and abstract--using the gun image but distracting from it as much as possible. This concept is supposed to depict a fancy rifle--with potentially Celtic engravings--zoomed in so that you only get the area around the trigger. To lighten it futher, I experimented with daisies and forget me nots, which are often symbolic of youth. This version has a small bouque of forget me nots in the trigger handle of the rifle. This would be still-life-like, with a shadow, against a plain white background in simple light colors and fairly casual typography. It's pretty rough... 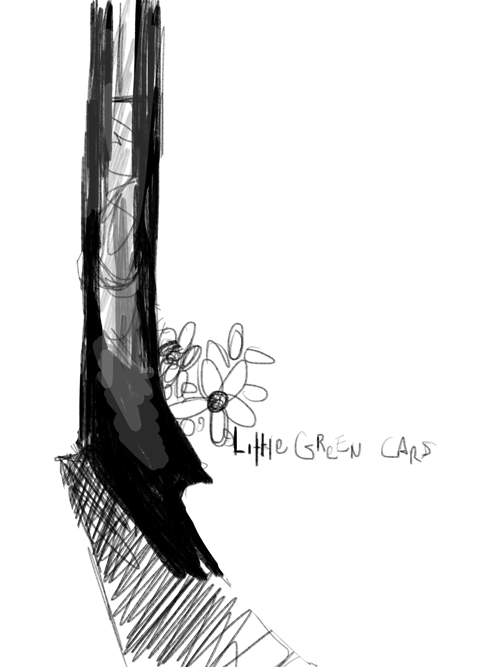 Thanks so much for feedback of any kind!