First off, thanks for a really interesting class!

For my first attempt, I followed the guidance closely, even down to choosing the photo from unsplash below:

I picked similar colours to the given example and experimented with mixing them up with the liquify filter, something I haven't really used much before. I also used the exact same effects and process in the video, and included some licence-free minimal psychedelic music to get this result:

I'm pleased with the results and learnt a lot from the suggested techniques. However, I think the changing effects, colours and music are a bit heavy-handed for most of my projects, so had a go at creating something more delicate. I created the below with more pastel colours, which reminds me of a cellophane or soap bubble texture.

I thought it would be interesting to incorporate more of the original photo as the colours are so beautiful, so played around in photoshop to make more of a waking-dream sort of visual.

I wanted to achieve a smoother sort of movement with this attempt, so looked at fading effects in and out rather than changing direction and speed. I didn't include any music this time, so it could be used as more of an ambient element in another project or embedded online. It also starts and ends on the exact same image, so would work as a looped animation.

I like the pace of the above result, but the fading isn't as smooth as I'd hoped, so I thought about reversing the movement with an ease in and out style, so it seems more like a breathing or contracting/expanding effect, as seen in the basic pattern below.

Overall I'm happy with the outcomes, and look forward to experimenting with more colours and movements in my other work. 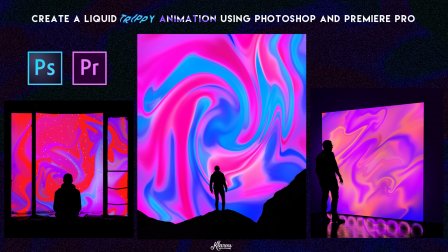