Linda Street Community Garden Poster My plan is to create a poster for the little sidewalk community garden in my neighborhood I wan to take inspiration from the late 1800s and early 1900s. Here are a few thumbnails I started with: 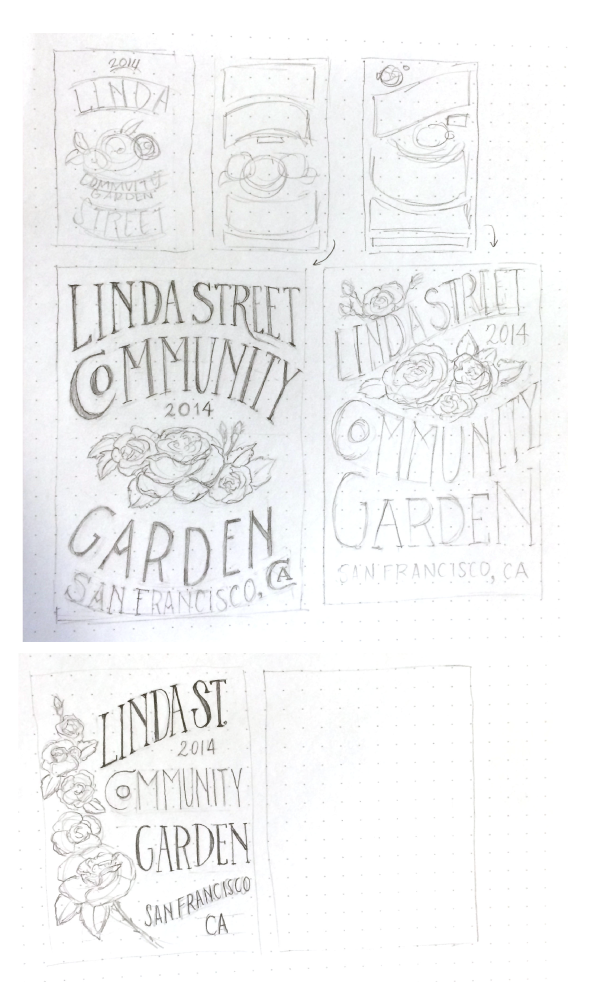 I'm planning on drawing more but after a while I started drawing letter exactly the same so I wanted to step away and get a fresh perspective. Clearly, I got obsessed with making the 'c' and the 'o' the same way over and over. More to come. 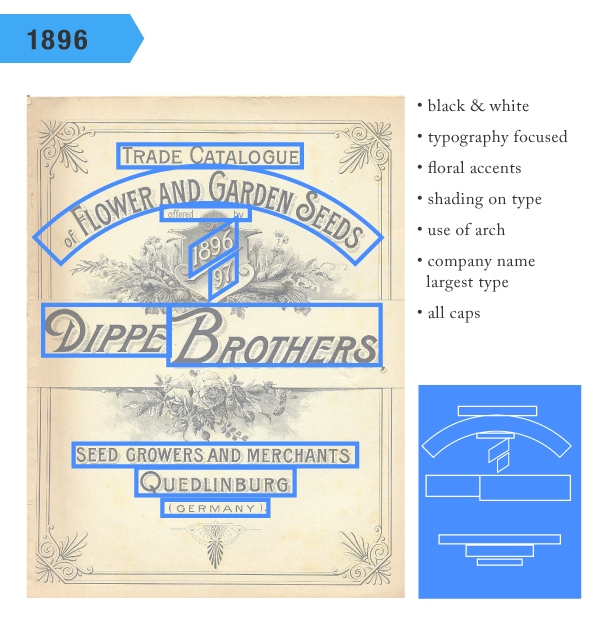 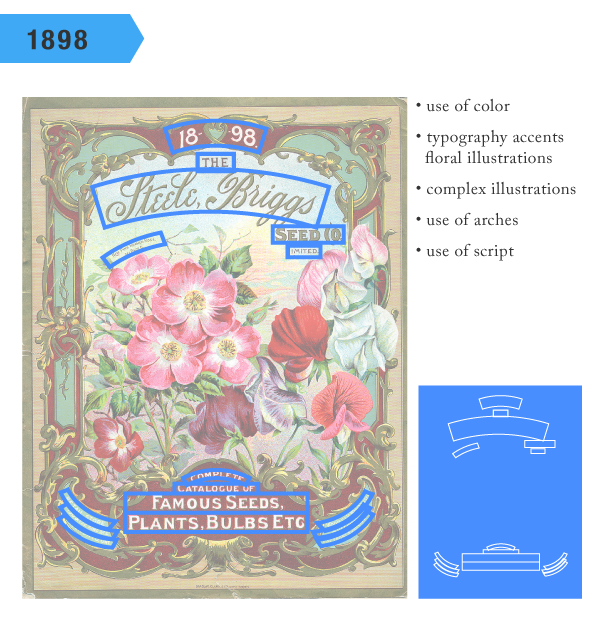 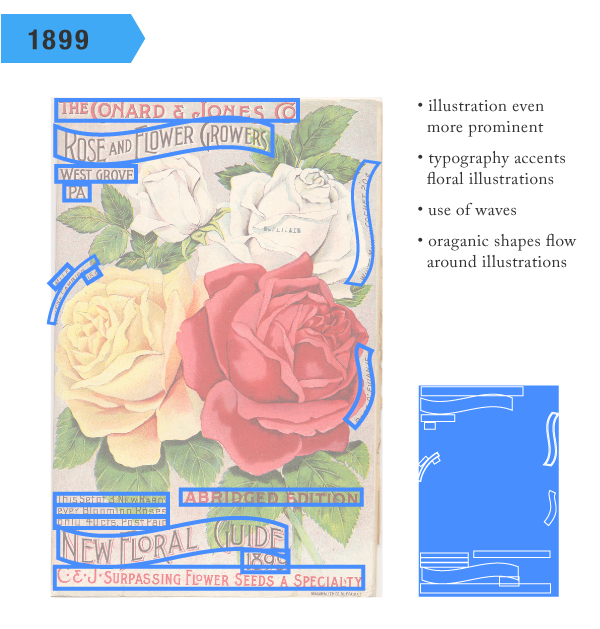 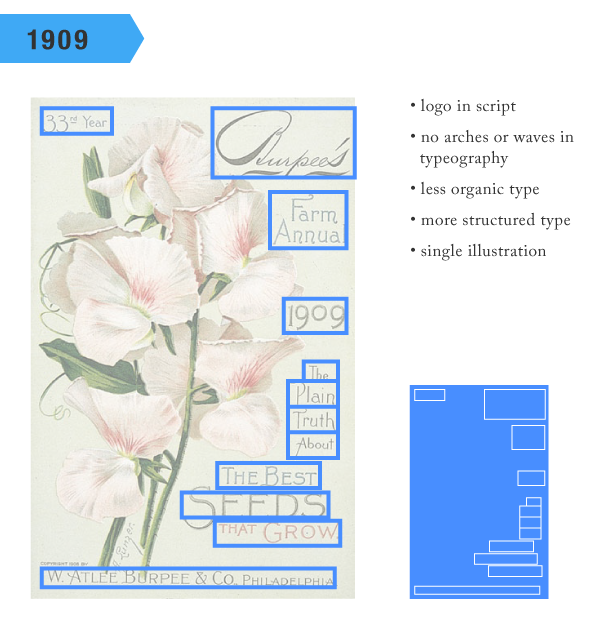 For the first portion of this project, I took a deep dive into the history of seed packets and seed catalog design. I didn't, however, expect to find as many references from the 1800s and early 1900s as I did. I actually had an incredibly hard time finding reference from the 70s to today.

It's probably going to be hard to believe but I did edit down the timeline below from everything I found. However, I didn't edit it as much as the course outline suggests in case anyone else has an interest in a more detailed history.

So without further adieu, here is a somewhat excessive timeline of beautiful seed packet gems. Well, at least until you get to the 90s. It actually seriously depresses me to see today's designs considering its incredible history.

I also added a few interesting historical notes along the way. 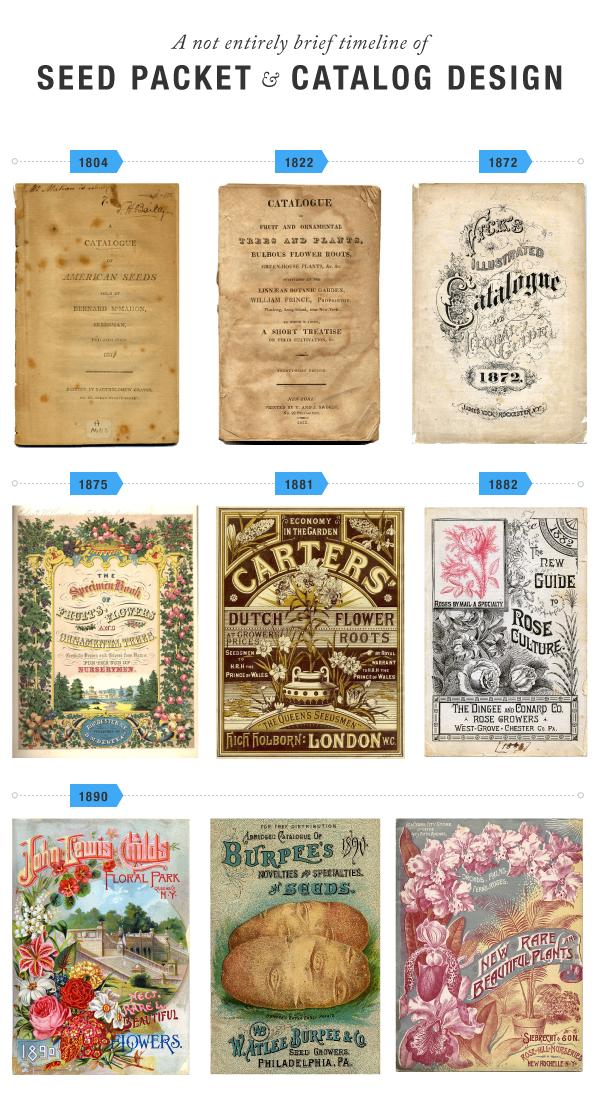 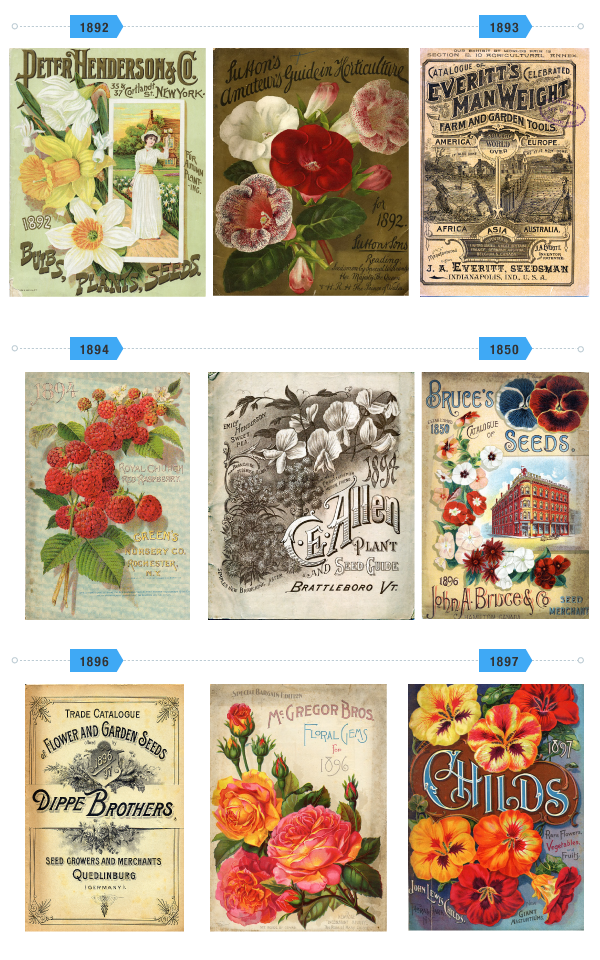 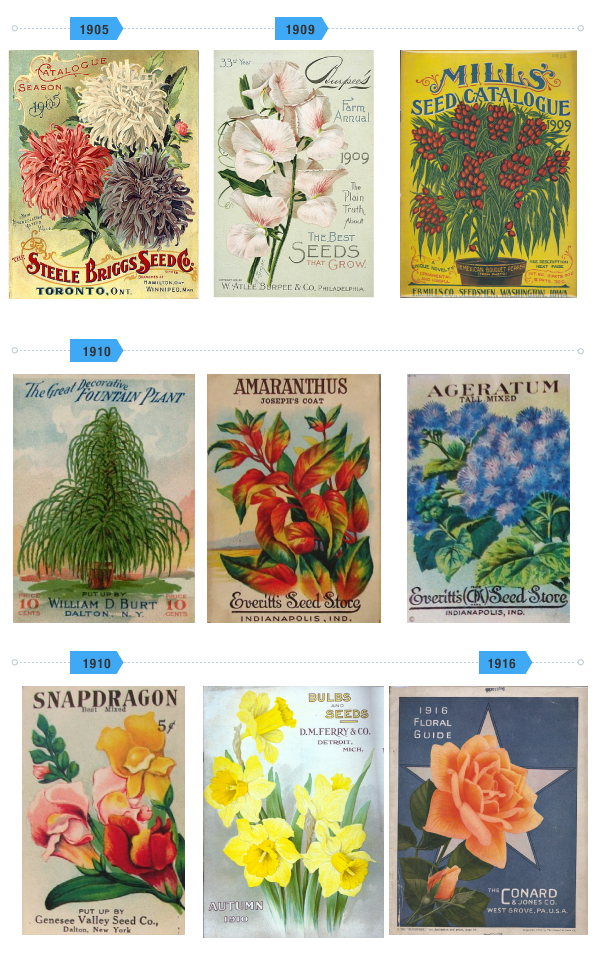 1917 (WWI) Because of food shortages due to WWI, the National War Garden Commission launched a campaign to encourage private citizens to do their part for the war effort by planting their own gardens. These gardens were often called war gardens or victory gardens. 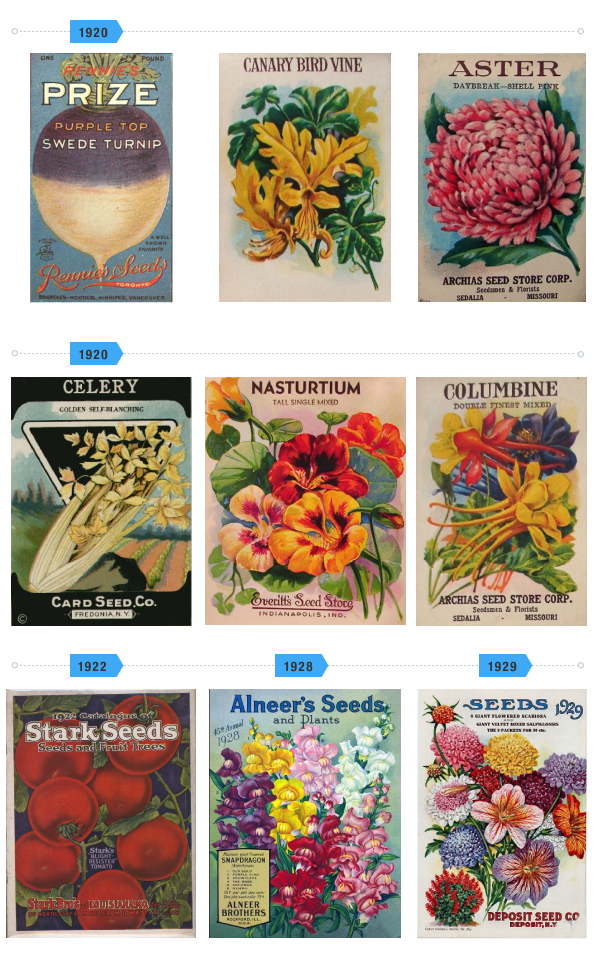 1939 (WWII) 20 Millions Americans planted victory gardens over the course of WWII. The gardens produced up to 40% of all the vegetable produce being consumed nationally. 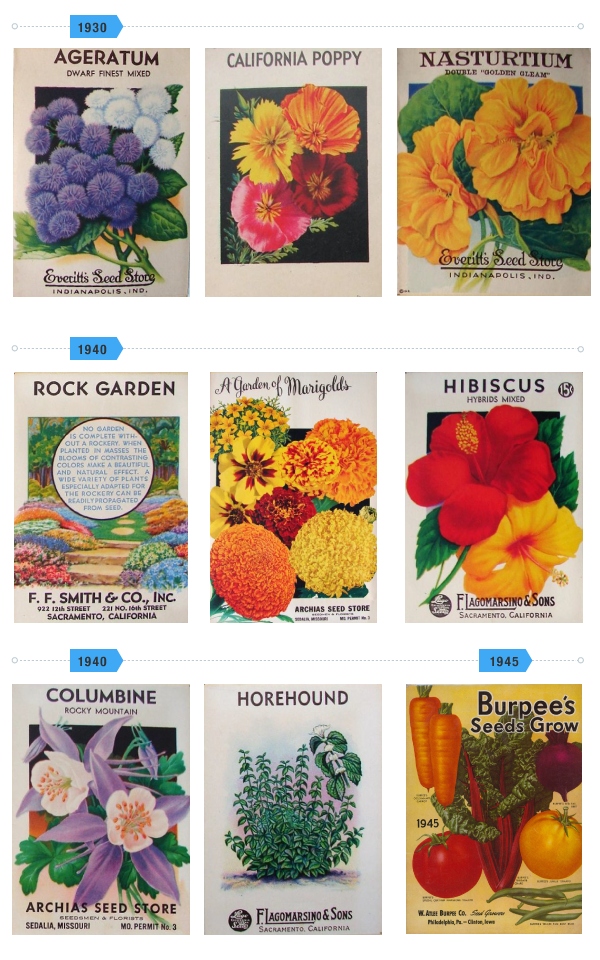 1945 Eleanor Roosevelt received resistance to her institution of a victory garden on White House grounds because it was feared it would create a movement promoting self-reliance which would in turn hurt the food industry. 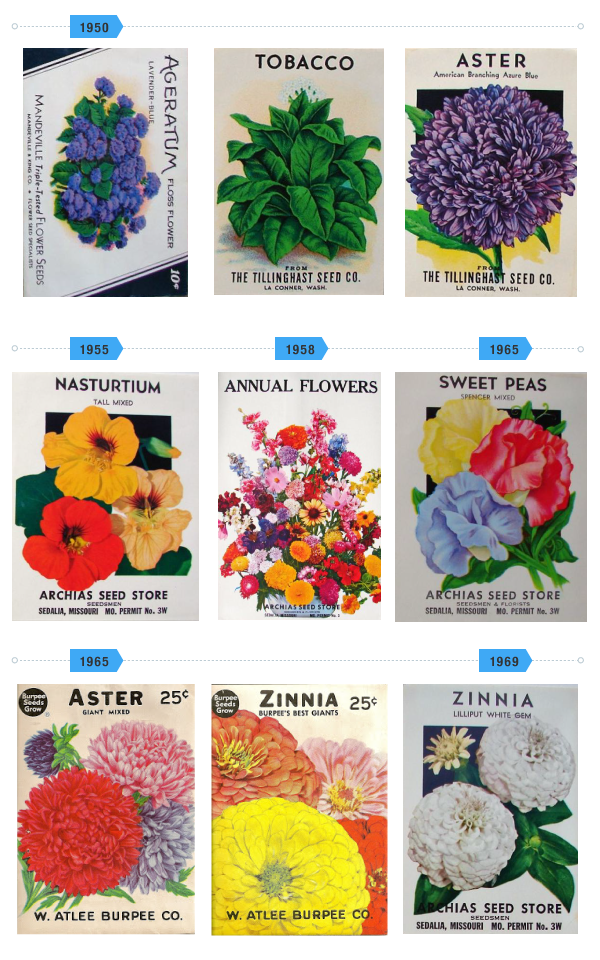 1975 The Victory Garden television series first airs. It was conceived in response to the hard economic times during the early 70s. There was once again an interest in self-reliance following the Arab oil embargo. 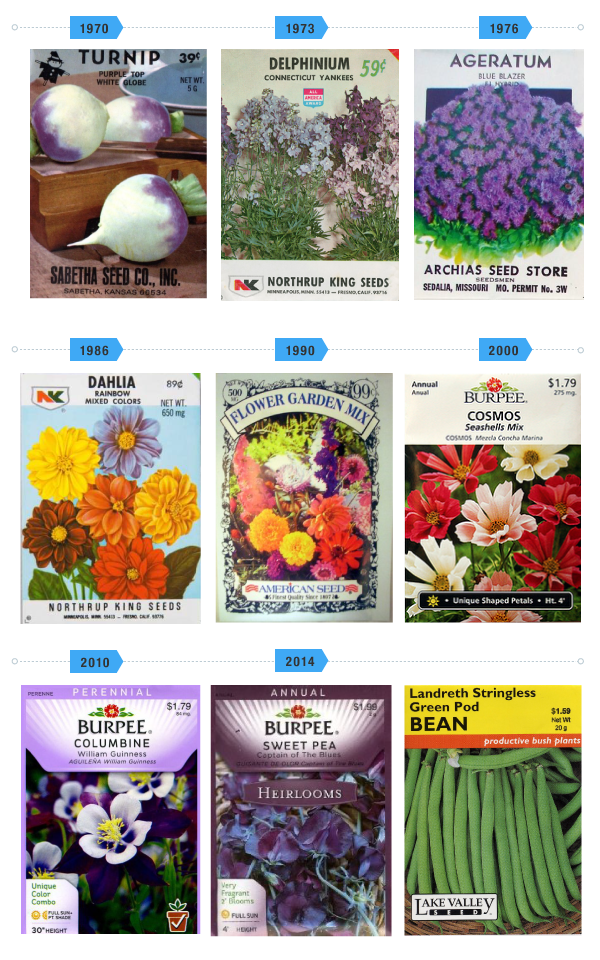 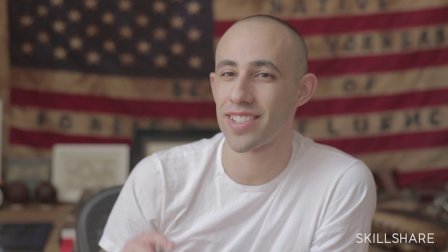