I used a planned process for this abstract painting, starting with a drawing.

My plan was to paint a dilute layer of Cadmium Yellow over the entire design area, then use something similar to these mixes. If you look closely you can see the pale yellow base layer under the stronger colours.

After I started painting, but before I had used any green, I decided to use Winsor Blue (Green Shade) instead of the Winsor Green. I think this gives more attractive dark green and dark brown. I varied the colours somewhat in the painting. (Because the painting is too large for my scanner, I had to take a photo, so the watercolour paper looks slightly grey, but the paint colours are reasonably close.)

I often like to include calligraphy with paintings. For this one I found a perfect quotation from Anaïs Nin. I was delighted not only by the meaning of the words, but also that I could justify the text, present it as a block of text aligned at both margins, which is difficult to do with calligraphy. I used Pigma Sepia pens, and intentionally made the letters slightly irregular to suit the painting and the quotation. 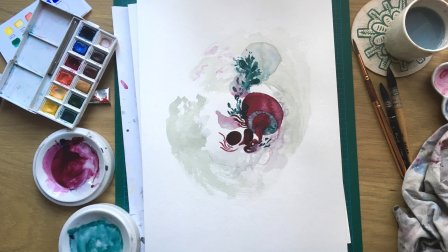