I was born, raised, and spent 25 years of my life in the Southeastern Ohio town of Lancaster.  Lancaster was founded in 1800 on the Hocking River and rose to prominence due to it's nearby rich farmland and canal boat access to Lake Erie and the Ohio River.  This led to the rise of Anchor Hocking glass company, the city's largest factory and jobs provider until the 1980s when cannibal capitalism and private equity firms weakened the company the reduced the workforce substantially to make money for their shareholders and, of course, themselves.  This devastated the local economy and it has never recovered.

Today, Lancaster is beset by a severe opioid addiction problem as well as stagnating wages and an economy based mainly on retail, service, and healthcare jobs.  Anchor still exists, but its a shadow of it's prior glory and influence.  The city is trying to attract jobs and interest by revitalizing it's historic downtown district.  There was no future for me there so I moved to Columbus.  My family still lives there and my feelings toward Lancaster are very bittersweet.

This all informs my design.  I started off with the typeface 'Fairview' from the Lost Type Co-Op, and then played with it using Aaron's tips along with trial and error to make it evocative of a mid-century machined stamp (calling back to when Anchor was in her heyday).  I added a reference to Lancaster's founding as well as her location in Ohio (also set in Fairview).  The muted colors below are meant to evoke a sense of how subdued the city feels today as well as the industrial grey and grime in the area surrounding the remaining Anchor plant.

This was an emotional piece for me to make... it's crazy how typesetting the name of your hometown is really shorthand for typesetting your life's story.  I am so grateful that I get the chance to design for a living and hope that one day I can help Lancaster in some way with that ability.

With texture and subtler colors: 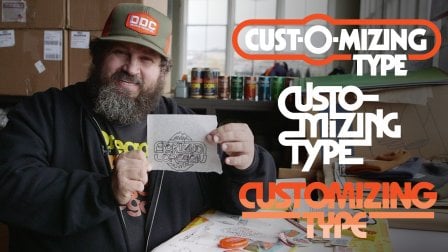