The article that provided this for this project was based on a couple of local news pieces regarding the fate of the L train line, which is outdated and will be shut down for renovations/upgrades in the next couple of years.

My illustration is a sort of reaper/pharaoh character who has come for the train line, as the ailing line is overgrown with plants.

Overall this felt like a great class, really well paced and I think really highlights the ways that using multiple Adobe programs in sequence can help you create great work. The lessons that focused on Illustrator or Photoshop covered material I was pretty familiar with ( although it taught me some great new workflow elements, for silhouetting in Illustrator I went with the blob brush since it was faster than the pen). In the After Effects lesson I had to slow things down a lot, and found myself repeatedly googling things like "what is a keyframe". That said, once I had the Aha-moments in After Effects things came together really well. I don't know if the end result is very polished, but it encouraged me to use After Effects to make similar animations in the future.

• I did a still drawing that I thought was fun, but it was a bit difficult for me to envision what parts should move since I don't have any past experience with motion graphics. In the end, I sort of chopped up my original drawing to make it so some of the elements actually had motion.

• I wish I had looked through all of the tutorial videos at first and gotten a better feel for the type of drawing that would have worked best with the animations in the course. I realized by the end that I didn't really have any pieces i wanted to use the "hair wave" on, so I will have to use the pinning method with another project in the future.

• Check the layers BEFORE exporting. It was annoying to have a gif I was happy with, only to realize the swinging arm went behind the bandage element in a weird way. I had to go back into After Effects to fix it. Oops. 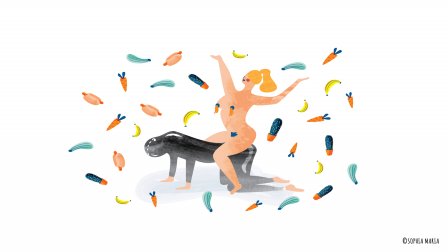