I chose to do a little fan art after being hyped on Kingdom Hearts 3. Sort of like a toy. I have have a nostalgic soft spot for all things Disney, Pixar, SquareEnix and RPGs, so its all of that rolled into one.

This was the initial sketch.

The initial vector. I got most of the colors from sampling different source photos and adjusted it from there. I used a brush set from retrosupply to keep the lines from being too uniform and more natural.

Now where the class comes in. I applied gradients to individual shapes and groups of shapes with transparency, mostly screen and multiply, and occasionally overlay (especially if there were light and dark colors in the same area. Then I used the built in halftone effects on top.

For the textures, I used a few (also from retrosupply.) There are two overlapping ones for the background. I wasn't quite sure what I wanted to do it with it, but just played around changing the color of the tiffs and the transparency effects until I got something I liked. I still don't know if it entirely fits, but I think it turned out alright once its all put together. For Mickey, I did a different texture. Instead of doing different textures individually, I just created a copy of mickey, united it into one shape and made a clipping mask.

And then, all put together. I added a drop shadow, and made a shadow for Mickey by copy his shape, and shearing/reflecting the image and then changing what I needed to make it fit. The keyblade glow is a gradient/transparency effect, with a brush stoke on top of an outline I pasted on top.

Awesome class. I tried to use as many of the techniques from the class as I could. I do think the a lot of the halftone detail is a little more subtle than I had planned on, and got lost in the texture a bit, but I think the end result of them together looks really cool so that's okay. This was definitely an opportunity for me to level up my illustrator game so I am very thankful. Keep up the great work, Jeremy! 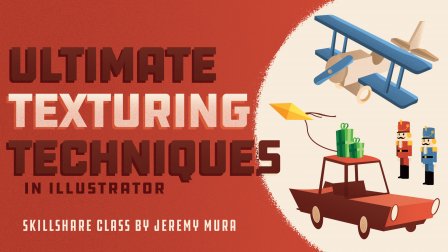