I have, through much deliberation chosen to Use Keaton Henson's upcoming Museum tour as my subject matter for this project.

Keaton Henson is a musician and illustrator, who I have been a fan of for a long time, and over the past few years has helped my development as a musician and artist. His music and artwork is very self-reflective and often depressing, focusing on breakups, abandonment and loneliness.

He hardly plays live due to his anxiety and this tour may well be his first, I have chosen the Booth Museum of Natural History leg of his tour for the poster project, and will try to mix the subject matter of his art and music with the environment he will be playing in. 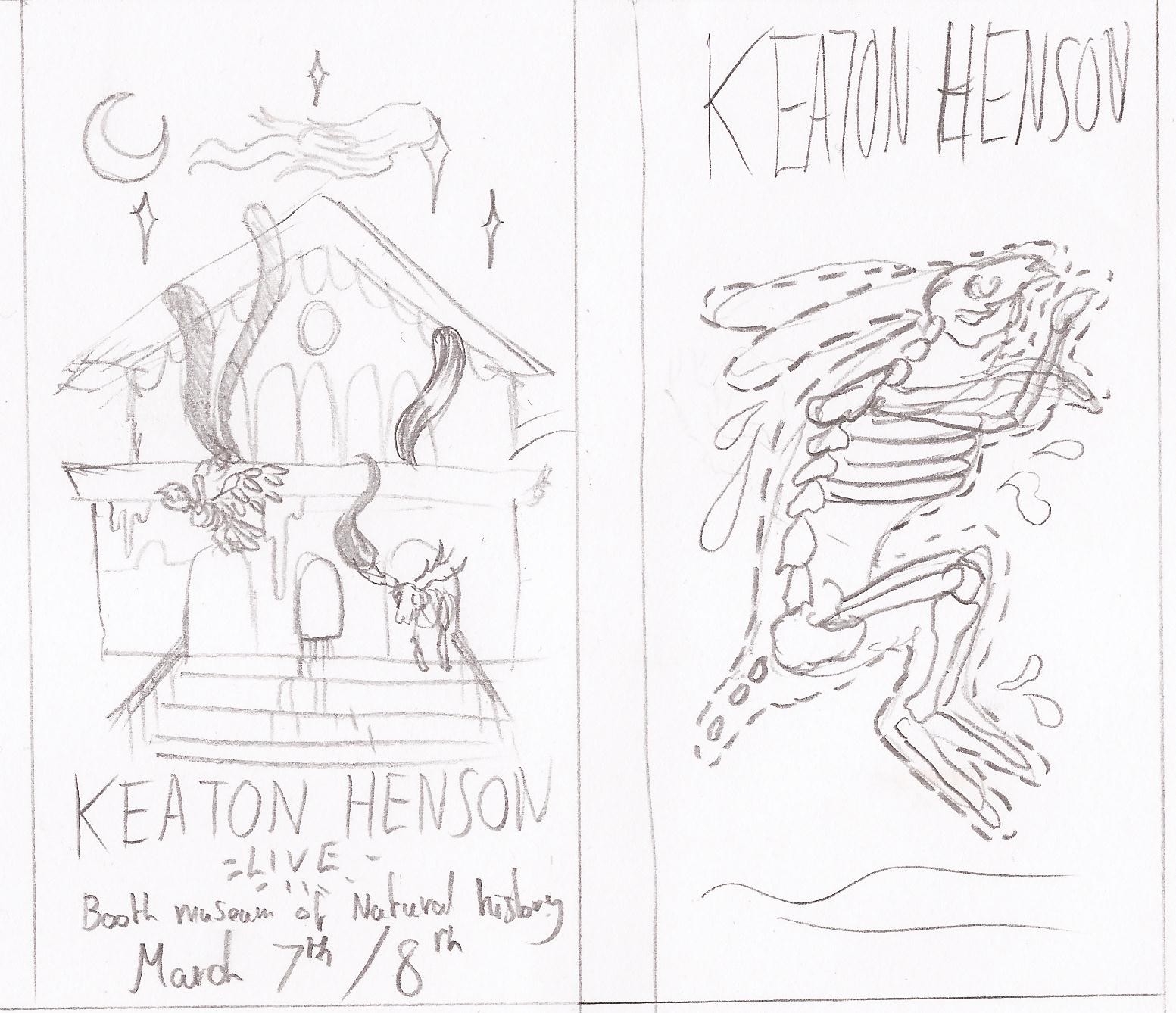 So these are my two first concept sketches for the project.

I'm going to be using a black/blue colour scheme to tie it into the original poster designed for this tour, as well as his book 'Gloaming'.

The first sketch is the Booth Museum at night, with skeleton animals and ghosts leaving the museum.

The second is a skeleton of a Hare, with a dotted outline of his album 'Dear'.

I've included elements of his own art to pay homage to his style, but in the execution of the final poster the artwork will be distinctly my own style, with only a slight nod to the shapes and outlines Keaton himself uses.

> I will be hand inking the posters onto paper, scanning them into Photoshop to adjust and colour the posters, whilst producing any type by hand on separate tracing paper to be later added over the drawing.

I like to produce these elements separately so I can adjust composition and the flow of the piece after I have inked them.

Through the feedback I gathered through friends and Facebook, I have decided to use the second of my two designs for this project as I feel it gives me more scope to play with show off my style. 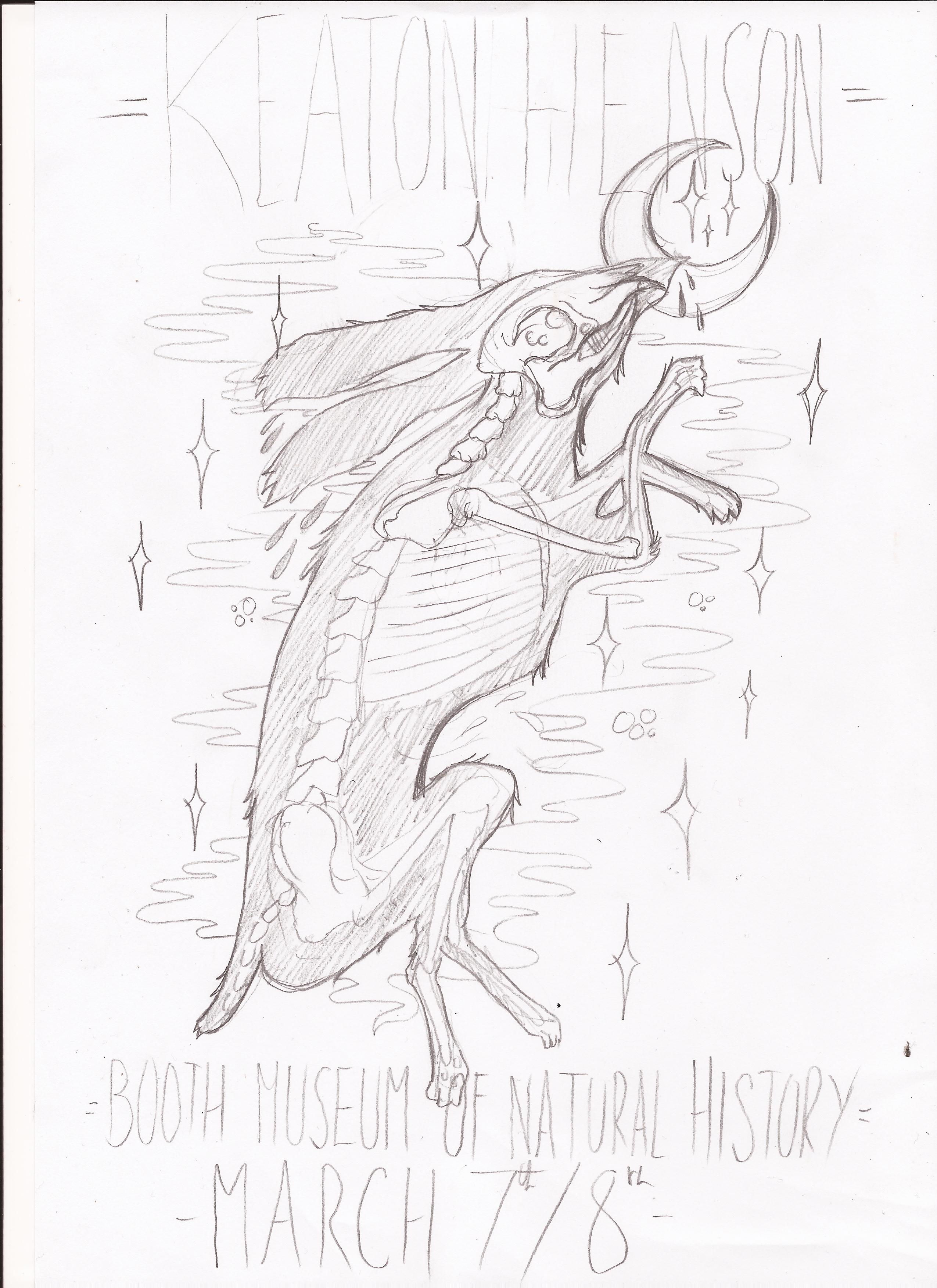 Bear in mind this is still a rough sketch so please take that into consideration.

The design is a reflection of Keaton’s album 'Dear' and the Booth Museum of Natural History. The Hare outline is my take on his album artwork whilst everything else is my own ideas, the skeleton is obviously a direct link to the theme's and displays of the museum itself whilst subtly hinting towards the macabre lyrics in Keaton's music.

The stars and moon do not hold any real significance or relation to the artist, more serve as a space filler and provide a more interesting background.

The typography I intend to keep simple, as not to distract from the artwork, just to compliment and provide information.

The above images are the initial progress I have made within the inking of the final piece, as you can see I started with the outline of the Hare, moving towards the skeleton and background before blacking in the outline, leaving a gap between the solid black and white space of the skeleton to make the outline prominent.

The inking stage has been prepared on tracing paper so I can ink the lines without worrying about erasing pencil lines or having scuff marks from my eraser.

Upon completing the main portion of the outline inking, I switched to a much finer pen so add little details to the bones (pictured in the close ups), this mainly involved adding cracking and fuse points, being as realistic as I can whilst to compromising on my style and ultimately just going with what felt right and looked good for the piece. 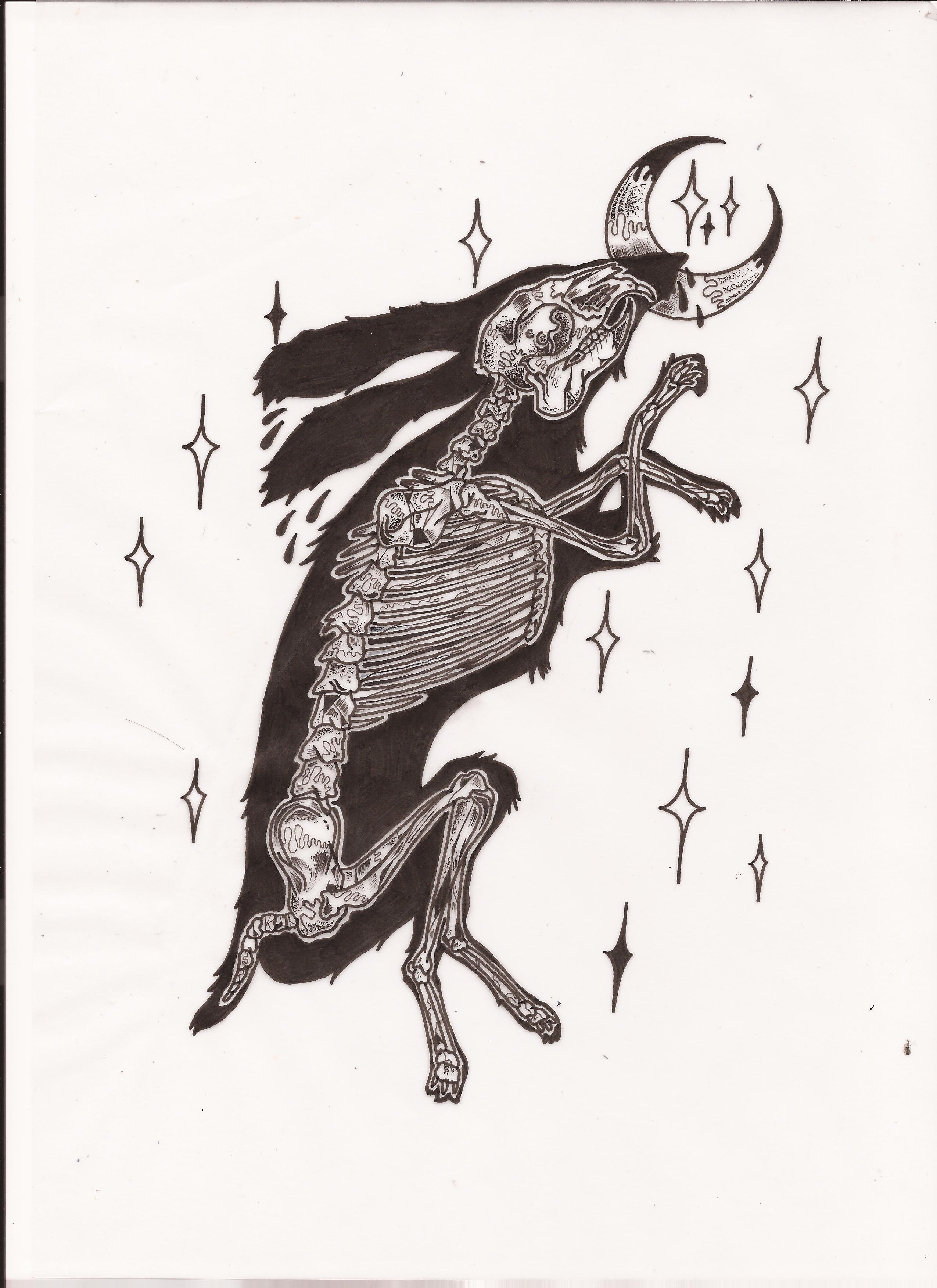 The above image is the finished line work pre photoshop, from this point I shall adjust the file in photoshop to make it truer to my drawing and prep the linework for colour and the back ground 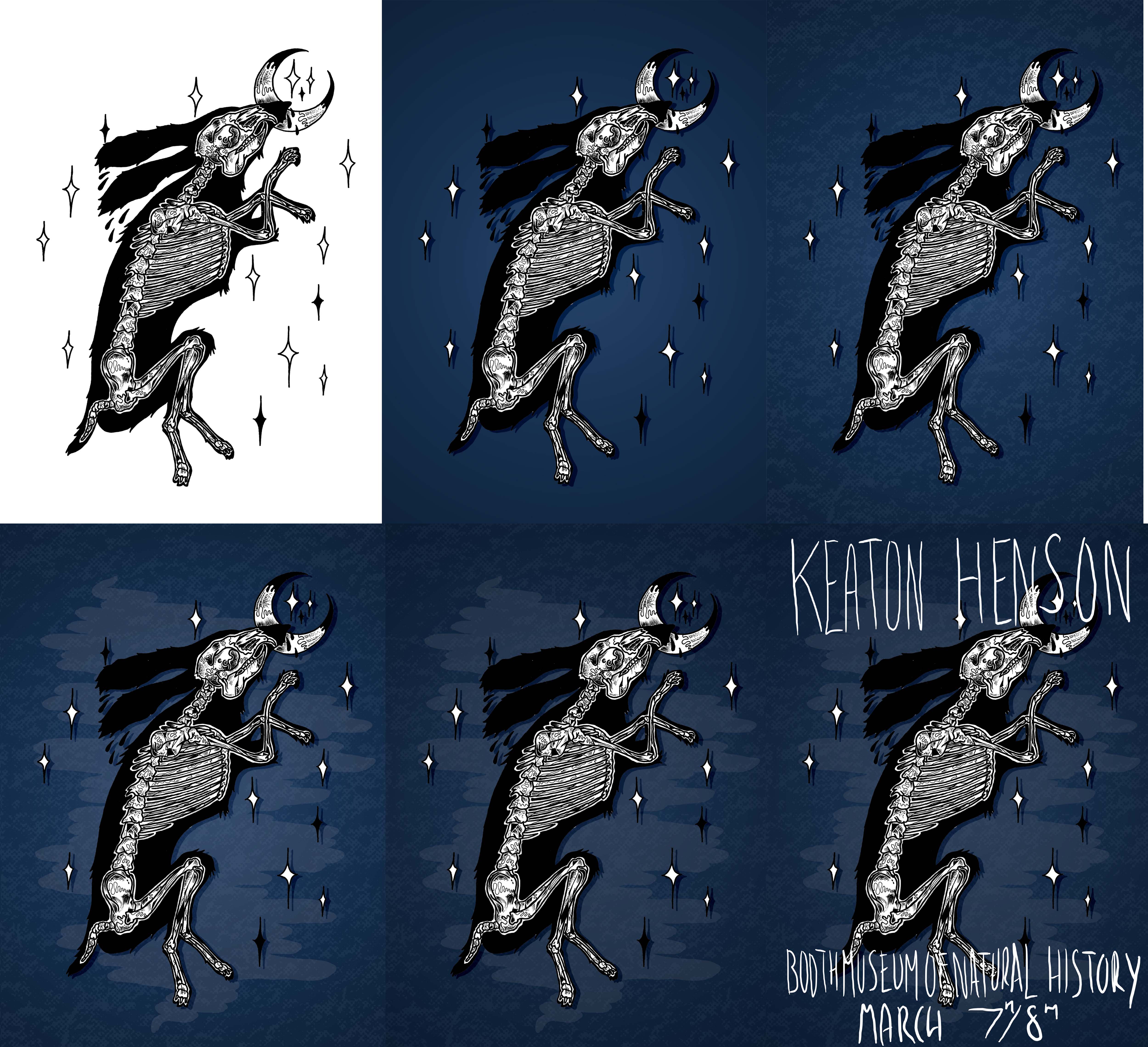 To properly illustrate the main steps I’ve made in altering my image in Photoshop I’ve screen capped the progress of my layers.

(Top left through to bottom right)

The initial step was to adjust my levels so that the black were true and the whites not discoloured, also at this stage I erased the background and ironed out imperfections and grim on my scanner. Some of the stars were wonky so lassoing them and altering their orientation was done during this stage, as well as resizing and placement of the entire image.

In the second image I added a drop shadow to the ink drawing to introduce a degree of separation between fore and background. The background its self is a block colour with a slight radial gradient to help focus the eyes towards the centre of the image.

Using the knowledge and explanation from the latest video lecture I decided to push my limited Photoshop know how and use a textured background, I used a muddy background on the basis of the Hare’s natural habitat, I opted for larger dots on my bitmap background because I felt it blurred the image and made the foreground more crisp and obvious.

For the final stages of my current progress included adding a smoke pattern behind my illustration (pictured in the original sketch), this was created in Photoshop with the brush tool and the opacity adjusted to allow the texture to come through. The colours were darkened using simply an all-black layer with the opacity lowered to make the colours moodier.

The final image includes a rough idea for the typography placement and colour options. 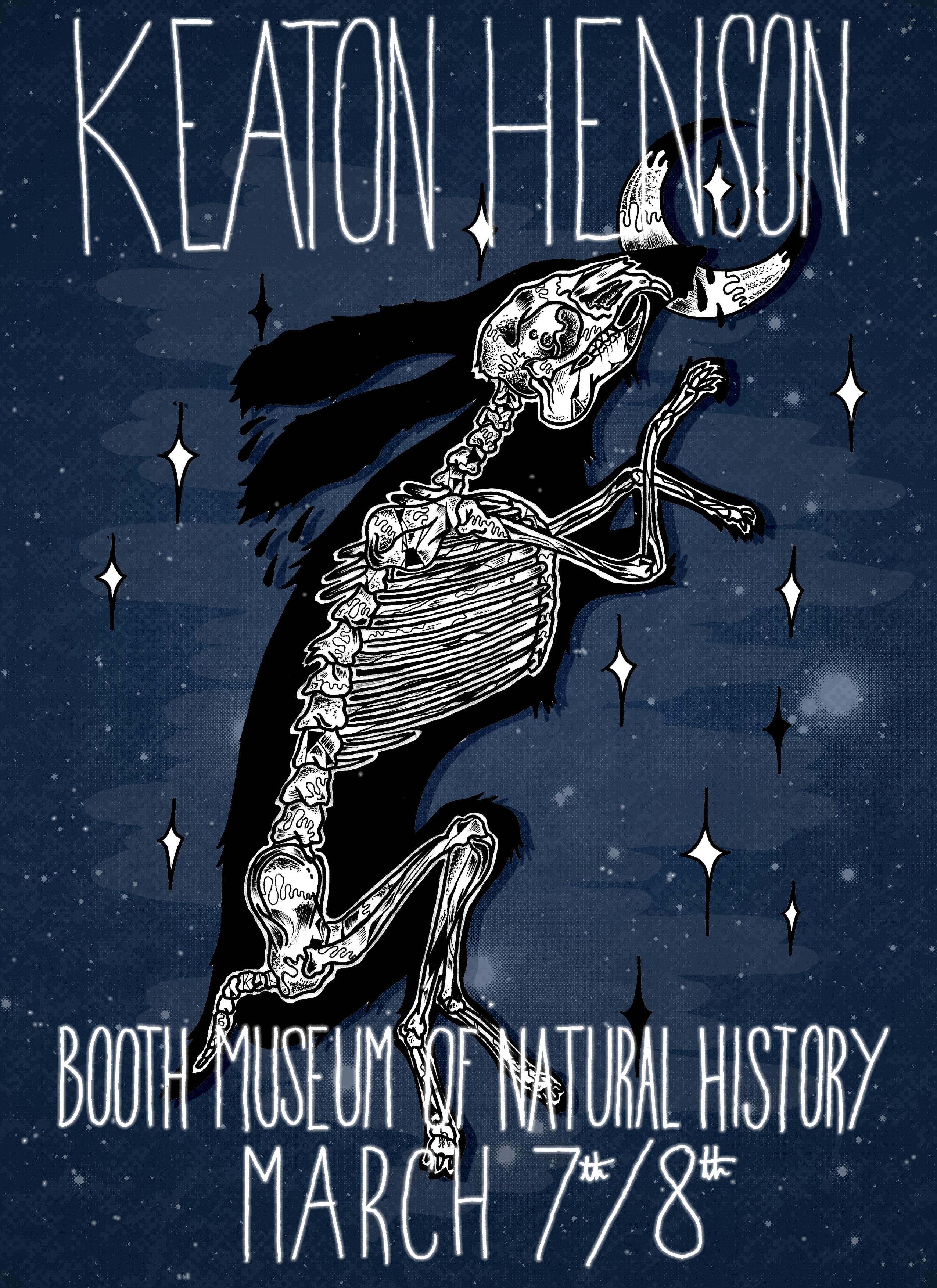 The typography I kept basic and neat, this was produced outside of the computer on tracing paper, scanned and adjusted digitally adding a glow to bring it forward from the design. I kept the text big and in the foreground so it seemed more involved in the design rather than it seem like an afterthought to the illustration.

I have really enjoyed this project and am proud of my poster and hope that you enjoy it too.