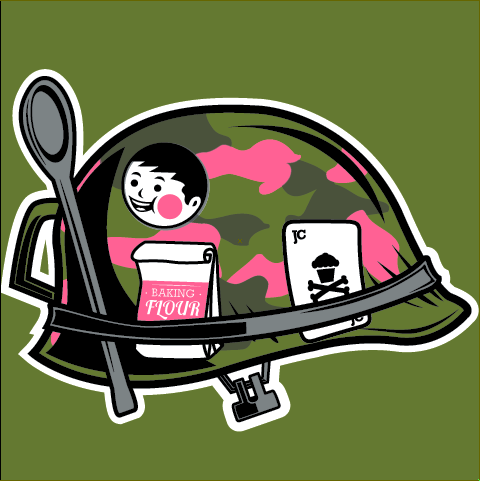 So here we have the finalized design, all the color layers properly divided and ready for the printers. I know the class prompt asked for a total of three different colors and I tried to cut them down as much as possible but four was the best I could widdle it down to without it looking completely washed out. Got rid of the fork, added a white outline around the helmet and settled on a green/olive color for the shirt. Frankly, seeing how it turned out it makes me feel pretty good, I'm really happy that I was able to absorb as much information as I did during this class. 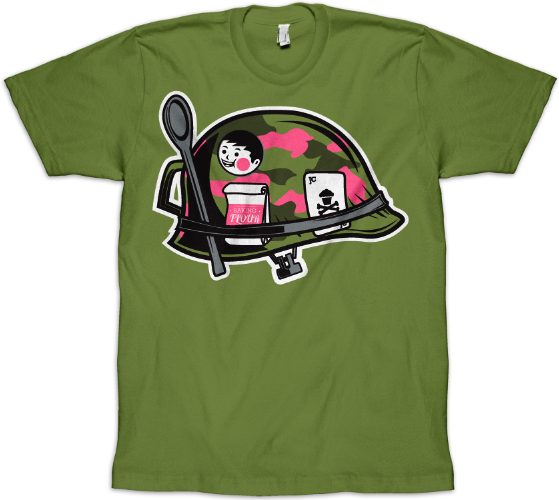 It was nice to have this insight in how to send a design over to a printer! I've competed in contests online for designing t-shirts and it wasn't nearly as involved as this was so surfice to say, I've been let off pretty easy for a while now. I'll post some final comments later on.

Here was my latest draft before I relized I was running 5 colors in a single illustration: 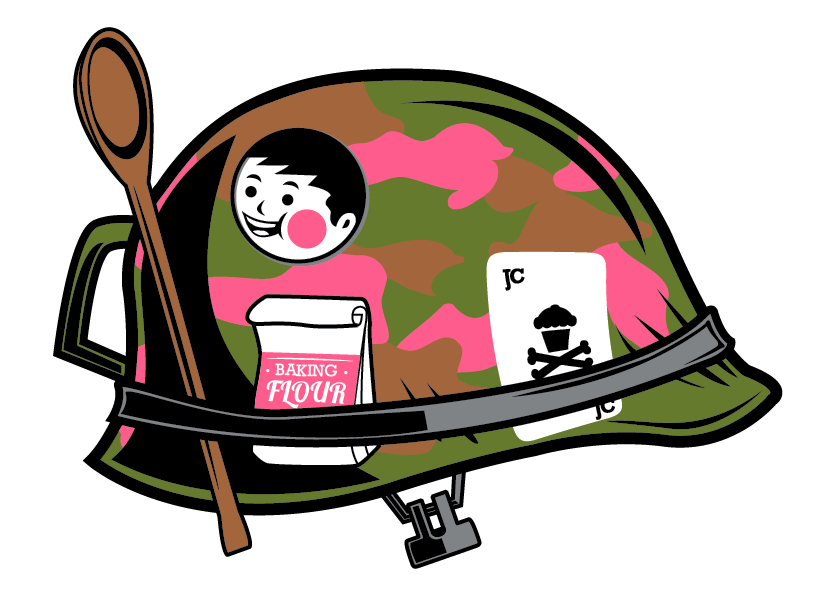 As much as I like the various colors I'm working with, I know I have to cut down to at least 3 or four before being able to throw this on a shirt. So I made some variations. 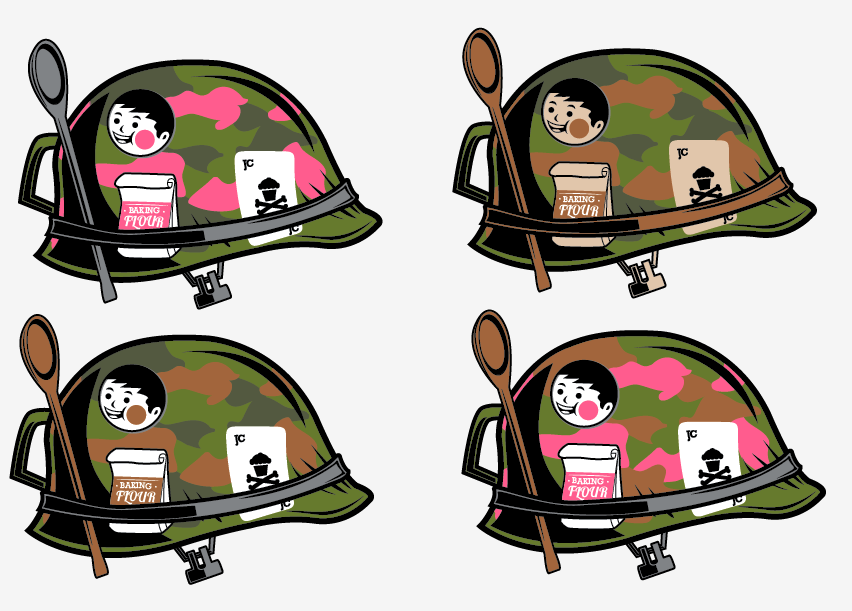 Oddly enough, I think I can manage without either the brown or the gray. The pink I've kinda grown fond of and using a lighter black is a great option as well. Hoping to figure out a better color pallette by the end of the week.

Here is the most recent update on my project. Tried to do the frosting splatter, didn't really come out the way I wanted it to so I decided to scrap the idea completely and get rid of the pink in the design. I feel like there needs to be one more piece of "flair" on the helmet, be it a Peace Sign button or a tube of frosting or whatever. I don't think I'm going to go with any text on this one, the image seems strong enough without it. Added a lot of dramatic shading, not something I normally do but I feel like it really makes the image here. I'm really excited to work on this design now. As always, comments and feedback are greatly appreciated. 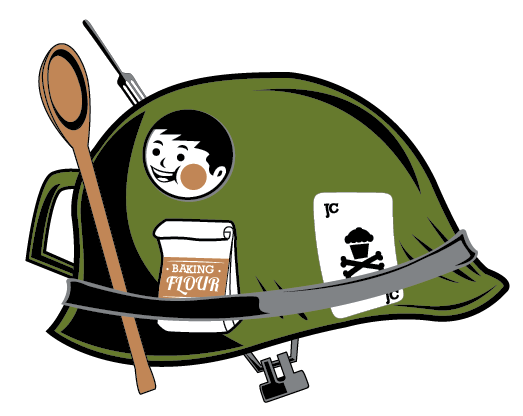 Latest work done, will be adding Frosting Splatter to see what it would look like but otherwise I'm liking where this is going. Unfortunately, can't seem to cut it down to three colors properly if I have frosting. Not entirely in love with the fork either, we'll see how this turn out. 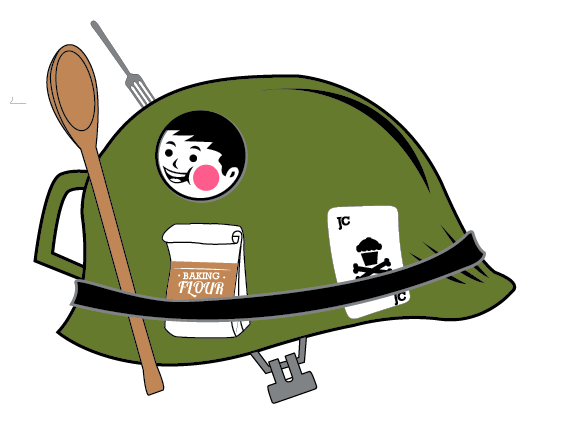 So I've been getting the lines down in Illustrator and it's coming together. Still at that bland state, but that's how works in progress tend to be. 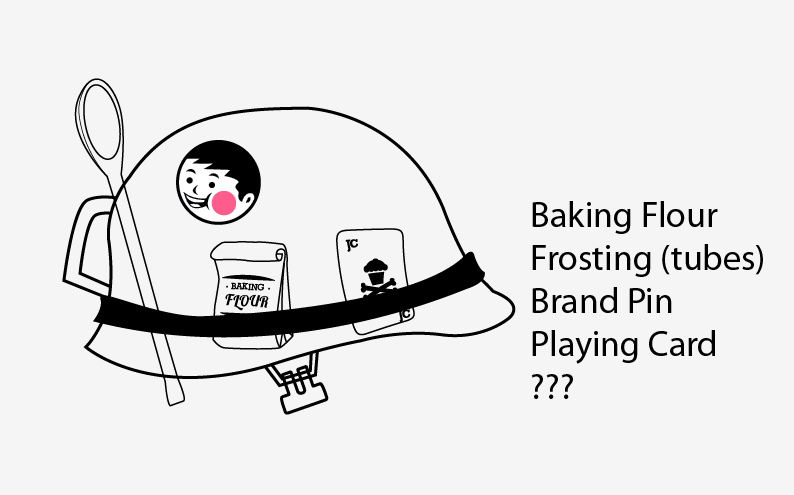 Some of the earlier advice on the project from Chris has been on my mind, not trying to force the "Cupcakes Bakery" theme down people's throats and having fun with the nick nacks and such. I decided to make the cupcake boy the pin rather than just the logo, to let the logo go on the playing card. As it is now, I certainly don't want to make it anymore obvious. I wanted to add a few more things, like a fork sticking out of the helmet bowl, frosting caked on the front of the helmet like some sugar coated slaughter spew and possibly frosting tubes like bullets in the band around the helmet.

I want to say that as it is, it's about 50% done but I'm not sold on whether to include or exclude anything just yet or to repurpose items differently. As always, any advice on that matter would be greatly appreciated since it's the biggest issue I'm having creatively right now.

So I've done some research on Johnny Cupcakes from researching various examples of their previous designs and shirts. They are colorful, light hearted designs and have a general sense of fun behind them. I imagine this brand has quite a loyal following. But what really caught me is how versitile these designs can be, how they can parody or reference a lot of different things from old movies to specific estehtics and still have a shirt that is so easliy recognizable as one of their own. 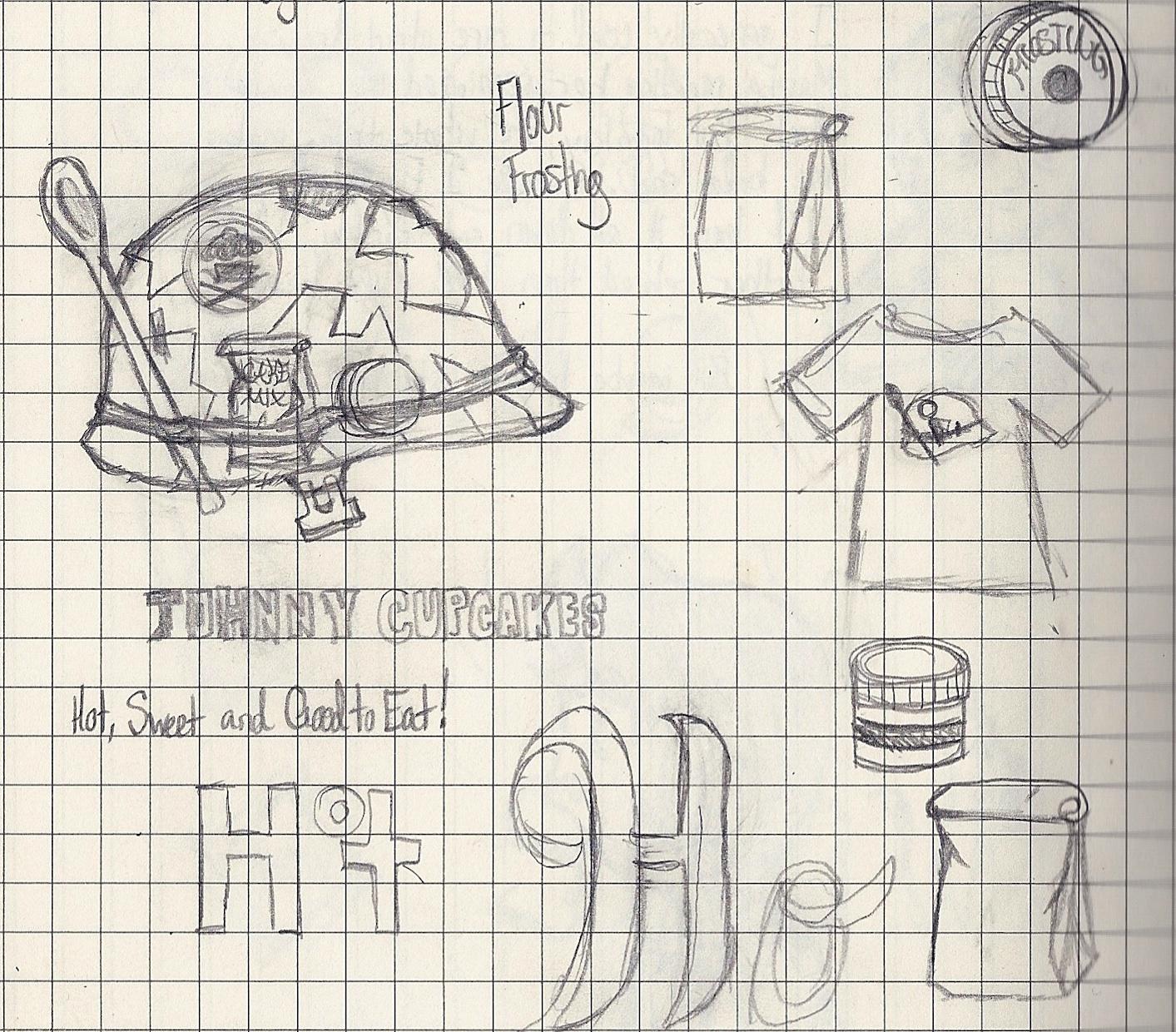 So with that in consideration, I sketched out some ideas that might stay true to what asthetic a JC shirt might have while focusing on themes that interested me personally. I remember listening to "Dirty Harry" by Gorillaz (1) when I was trying to come up with ideas for a design and I remembered the album art for the single they released from that song. The art itself is a parody of the cover art for Full Metal Jacket with the Vietnam War helmet done up in pins and other memorabilia and I consdiered how I could make it a JC design. So I looked at their previous designs and discovered the Nickelodeon line they did a year or two ago, specifically the Hey Arnold! shirt (2) and everything came together. I kinda see the helmet doubling as a mixing bowl, with little travel size containers of frosting and cake mix strapped to the helmet with a wooden sppon. I did some other ideas that came to mind afterword (3) but I don't think they really meet the same quality as the first design sketches.

When in doubt, go with the first idea.

I'm a graphic designer in MA and through a strange string of circumstances I've grown fond of designing graphics for t-shirts. I would fall in love with some of the shirts I had as a kid, so much so that I couldn't bare to part with them after they had become raggedy, stained, outgrown or just plain old. So the idea hit me one day that perhaps designing and making my own clothing might provide a solution to this problem. Ever since, I've been throwing designs together for various contests online for threadless, welovefine, etc. just to keep myself sharp while polishing myself as a self proclaimed t-shirt aficionado. And out of all the things I make through my skills as a designer, nothing is quite as fun as making a graphic tee.

I don't think I've honestly had the the time actually establish a brand for myself and try to play it up. I work freelance, I do whatever the job calls for and my goal as a designer is to  make a feasible image from the mind and ideas of a client. Although this comes with mixed results and frankly sounds kind of souless, I take some pride in being able to do this. If I want to design t-shirts for more than just the occasional contest online, honing in on my skills and establishing a style and identity for my work that more people can relate to and enjoy is essential.

I'll be attempting (and I mean that in every sense of the word) with a Johnny Cupcakes design. I'll play around with a typographic or a illustrative option and see what comes of it. I have a good feeling about this project.