I really enjoyed this course, and the process of creating this illustration was very enjoyable, even though I'm not totally happy with the result.

I was a bit too ambitious with the size of the illustration since it required modelling so many pieces. The relative scale of items is also very wonky, with some buildings being far too small relative to the rest of the image.

As a bit of an experiment, I also tried to do a kind of "cut-away" design at the bottom, where you can see underground, but I'm not sure how readable that is.

I did learn a lot while making it, and I'm sure my next isometric illustration will be better.

I started with a very rough sketch on paper and then moved to photoshop to sketch on the isometric grid (since I don't have a printer).

I think I should have picked a green instead of having two very similar reddish colours. The colours are definitely not a strong point of the illustration. I picked a five colour swatch from Adobe Color that looked good to me and then used Illustrator's colour window to create basic tints and shades of each one.

The elements of my illustration were built using three main methods:
1. Using the pen tool on an isometric grid, as explained in the class.

2. Using the Effects > 3D > Extrude & Bevel method, as explained in the class.

3. Using Actions. This works the much the same way as using Effects > 3D > Rotate as explained in the class. I Forgot where I first got these actions, but they aren't hard to find. Here's one tutorial that utilises the same actions:
https://pixelbuddha.net/tutorial/tutorial-isometric-actions-and-icons-in-illustrator 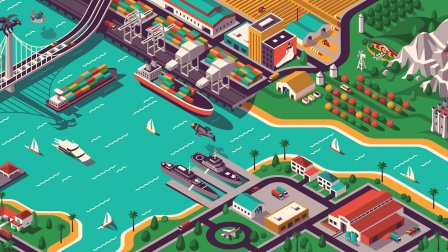