I was unable to get garnets but these rose cut iolite cabochons are beautiful. I may shorten the chain slightly as I find it a little long for my neck and it gets tangled up in itself. Otherwise the swing and movement is lovely.

I have made an Iolite pendant to match the earrings and made the chain for the earrings half an inch shorter which works better for me. I like the pendant a great deal as the starburst effect makes it jump out (not literally!) from the neckline.

I made a pair of 3mm apatite starburst studs today. The colour does not come across well in the photo but is very pretty in real life. I had never tried ready made bezel cups before but could not have used 3mm stones without them. I found them really easy to use and applied the sweat solder technique to get a neat result. The studs themselves are half an inch in diameter so quite dainty.

As it is National Beading week I have made a rhodolite garnet pendant on a garnet and pearl necklace. The garnet beads are from the Curious Gem, my local bead supplier and the little pearls are from Eastern Character beads on eBay. 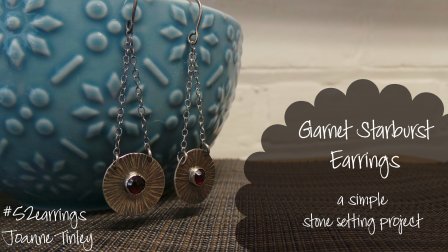