And here's my third animal: the wolf. Made entirely with watercolour. I wanted to respresent the wolf as the guardian of the forest. I often try to 'control' watercolour in smaller paintings. This gives the image a less 'loose' feeling than the whale & the deer where the ink could run more freely.

I decided to join the Inktober Challenge. I've already created a whale with black ink and watercolour. And a deer in black ink without a background - I didn't have any inspiration at that moment. :-) Hopefully more Inktober animals will follow...

Too late for Christmas, but just in time to wish you all a happy New Year! :-)

UPDATE - so here it is, my final illustration!

I wanted to do something with a water buffalo and was inspired by a photo series by Dewan Irawan. When looking further I found this amazing image of a boy sleeping on the buffalo. And because Sova's illustrations with the combination of a tiny kid and a fierce animal are so magical, I decided to use that photo as inspiration for my final illustration.

Although I'm still struggling with the timing & how wet the paper should be, I think the result is nice. Maybe the background could have been a bit more 'dynamic'... but that will require some more practice on my part. :-)

Hi, I thought this class was quite difficult but a lot of fun! I still need to practice more before making a final illustration, but here you can see what I have so far.

I've chosen 3 of my animal sketches to work with and for each one I tried:

I used Sumi ink and this didn't flow very easily. So I had to use a lot of water which caused the 'patterns' to grow a lot! Often more than I wanted... Maybe I'll buy a different kind of ink and try again. :-)

I also tried to achieve the 'fluffy' result by painting my animal in a wet background. But this mostly ended up with my animal running into the background.

I struggled a bit with this one, because apart from the remarkable white stripes on the head a badger is in fact entirely black. :-) Some of them have some silvery, grey hairs on their back, so I played a bit with that feature. The background is supposed to respresent a starry night sky, but a black badger isn't easy to see against such a dark background. :-)

The bird picture was in fact just black and white, so I just played around with the colours here.

I really like the result of the first 2: the ink formed some amazing patterns and I liked the colours in the watercolour version. In the 3rd image the background is a bit boring and I didn't succeed in applying the colour palette very nicely in the bunny. 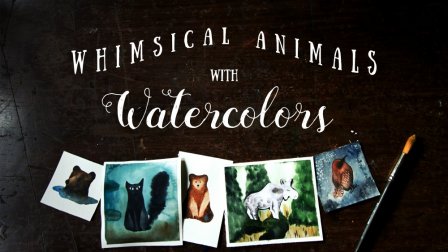