I really loved this class and am sooo thankful to Ira for introducing me to the work of Edward Gorey. His style of creating a whole lot of shadow and depth with just a few highlights is something I really resonate with and now I have access to so much inspiration and material to learn from! In this particular example above I love how Gorey uses just a few different techniques to create a complex texture on the Quingawaga creature, and then keeps the background simple by building up many many strokes in the same direction.

Photo by Moritz Kindler on Unsplash

I chose to draw an Octopus as I'm really fascinated by these creatures at the moment. By the way, Unsplash is a great resource for finding reference images that are free to use - but do credit the artist where you can!

Getting to my final sketch was not so easy! It took several iterations before I reached a composition I was happy with... I really tried to work fast and not think about it too much, but the forms of the tentacles were quite tricky. Once I understood how the form worked, drawing the others became much faster. The whole process taught me so much about direction and foreshortening.

Eventually, I decided to compose the whole octopus form into a circle so that all the tentacles would move in and frame the centre.

This became my final sketch which I also used to map out the surrounding elements and background layers. Then I traced the outline of the octopus through to the paper I would use for the final inking. Here I also added some light pencil guidelines to remind myself of the contours and areas of light and shadow.

Before going to ink (I'm a super nervous person!!) I tried out a few techniques to see which would create the effect that I wanted. At first, I thought to do wavy hatching lines for the background of the sea, but then thought it would probably be too complex alongside a heavily shaded subject, so I decided to keep it simple and mostly straight, with some deviations to represent movement in the water.

And so the inking begins!

After I made the first layer of texture I felt quite demotivated because it looked so flat and lifeless - then I remembered that Gorey adds a lot of shadow in his images and that's when it clicked! As soon as I went deeper with the shadows and built up layers around the contours, the whole form suddenly popped out of the page and it became very exciting! In some places I went too far and should have taken a bit more care, but now I know it for next time... also I mixed up some parts where it should have more highlights than shadow, for example on the left tentacles, but this I also learnt from and the right tentacles are much better I feel.

A tiny accident happened when I smudged the line of the seaweed with my hand, but I actually quite like the effect as it looks a bit like stringy seaweed or coral reef - something to keep in mind for another underwater illustration (;

Until here I inked everything with India ink and a dip pen or brush, and for the background I used a Rotring radiograph pen to keep the line weight steady.

The final result! Although I made quite a few mistakes, I'm actually quite happy with it and because I learnt so much along the way, I know my next one can be even better!

Thanks Ira for another fantastic class! I can't wait to try out the other two styles... (:

one step at a time 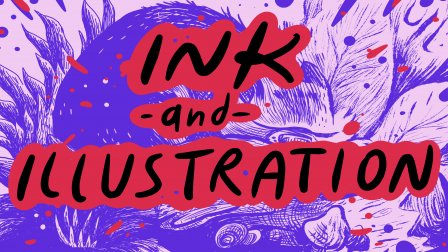