Day One: I realized after I was half finished with this first page that I need to escape my mental trap of always trying to match the actual colors. For Day Two, I'm definitely going to pick my palette before I even decide what to draw, so I CAN'T get stuck. I also didn't match the time I had with the complexity of what was in my head, so I got rushed to finish. ...and I noticed that I had the prompt wrong in my head. hahaha. oh well... I Still Had Fun, which is more important right now.

The next challenge will be whether I can keep adding to this project every day for the whole two weeks...

DAY TWO: Again, not much time, but that's the beauty of this class, isn't it? I also didn't have a lot of brain bandwidth. So I went with simple skylines of the places I've lived, down to my current life today in Maine.

DAY THREE: I ran out of time and also had a more complex notion for this one than I thought I could manage with my markers, so I did a test run in Procreate. I actually do want to try it with markers now but will have to wait for later.

DAY FOUR: I had a little time today but also wanted to scale down my ideas to match the time actually allowed so I could have fun just feeling that lovely running-the-marker-across-the-paper feeling.

DAY FIVE: Mindful was tough for me because I had to get up extra early before the grandkids so I could actually have that moment of somewhat quiet and calm. And then I kind of had to hurry it up once I made my life. And it was still fun! Just enjoying the feel of markers on the paper and not fretting about colors or shading or blending or having it look fabulous. Enjoying the process FTW.

DAY SIX: Favorite Color. I don't really HAVE a favorite color, but do tend toward several and away from several others. But Dylan said we could pick whichever we leaned toward just for today. So I did. I remembered to bring my sketchbook and markers to my grandkids' horse vaulting lesson this morning so I could sit in the car and draw. (I watched the kids, too, intermittently). And the morning daylight in the car turned my photograph even more blue than it already was, which I kind of like.

DAY SEVEN: Belly Laugh - I have been watching Chinese historical dramas lately and am hooked because the costumes and sets are amazing. However, some of the events are laugh-out-loud funny to me. I had to rush a bit with this one but it was still fun.

DAY EIGHT: Body Love - this was a tough one for me and I'll admit that I did not give any love to some things that I won't say I don't like about my body but that I have finally gotten to where I am at least neutral... maybe I'll get to full-on body love in my 70s... meanwhile, I'll celebrate these.

DAY NINE: I Wonder - yes, my continuing fascination with Ancient China. It was fun to look at all the paintings of various wardrobes and different costumes appropriate to different occasions and class levels. But these are the emperors in four different dynasties. I'd still love to learn more about their headwear especially. Also, my calligraphy in Chinese is definitely no good, but it was fun to try. I can see why it is and was considered such a fine art!

DAY TEN: Home - I'm really looking forward to moving into my own house soon after living the past 9 years with my son, DIL, and two grandkids. So this is all about my NEW space!

DAY ELEVEN - Map - struggling with this one a bit and yeah, it's because I'm trying to be clever, but also just because I want to do something particular... I'll get there soon.

DAY TWELVE - I'm out of order because I got frustrated with all my different ideas for the Map. But this SKY prompt worked immediately.

DAY THIRTEEN - My Report Card. I decided to give myself all gold stars because, dang it, I've been doing okay. Also because my dad was always a real jerk about my report cards (which were good but just not quite good enough...ever). But I get to rewrite that story and it's all gold stars all the time. 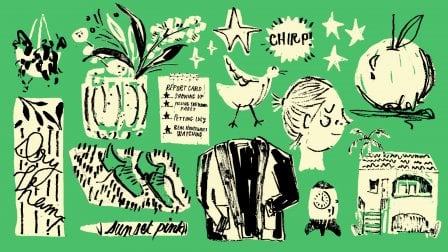