Here I have some sketches and ornaments, I decided to design everything myself because I'm usually afraid that something might be copyrighted and better safe than sorry. Though, I always end up doing things "my way" anyways, hahaha!! plus, I haven't had a printer for more than 5 years, yup. I think that having a printer makes us waste waaay more paper and ink than what we actually need (it's so easy to just press a button). I have got used to draw or write everything down and you know what? it has helped me improve my observation and drawing skills AND writing things down makes me remember things better... but I digress, back to my project, I checked illuminated scripts, got my inspiration and made this design with pencil:

When drawing the lower part (have no idea how to call those swirling vines), it felt similar to doing zentangles :D it was nice and relaxing. When I took the picture I realized... oh no, what have I done, can I really paint all those tiny details?!!! After that I filled up the gold areas with a Posca pen:

And decided to erase the pencil from inside the letter before adding color... wroooong choice, I had no idea where to paint what and ended up drawing with pencil again. You only learn by making mistakes, right?.

I was very tempted to make the outlines first and add color later, but I really wanted to try how it originally was made, with solid colors first and then the details. No risk no gain, so I gave it a try:

I felt my letter screamed Christmas colors, so I tried to change the green to blue. Oh! here you can see my gouache set using an upcycled ice cube tray!:

After that I forgot to take pictures, I guess I got too focused, heh. Voilà! I used a G Nikko nib pen and black ink for the details and white acrylic with tiny brush for the highlights:

I'm veeeery happy with the result! I'm also surprised that I have got several comments about it, but no one relates it to medieval style... I wonder if it is because of the colors or... what can I do to make it look more medieval? or is it just that not many are familiar with medieval art/ designs/ motifs? Either way, I love my bookmark! :D

Fun fact: I've always been fascinated by the medieval period, including its art. I wanted to make one of this letters but had no idea how they were called, so I didn't even know how to google it!...until I saw the image of this class and I was like "that!! that's the thing I wanted to do!" and so i learned it was called "illuminated".

I love Books, Handicrafts and Nature 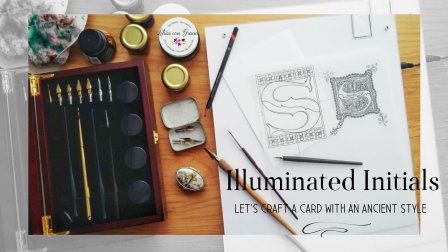