Here's my final result. It's not the greatest because there was so much in the tutorial that was left unexplained.

Btw, I am a huge fan of Studio JQ, but wanted to highlight some of my struggles to hopefully help others trying to follow along.

The first thing I noticed was this object called fall off. I spent a while googling it and only got results for C4D Field tutorials. Even though he never explained this layer I continued on hoping it wasn't important.

The next thing I noticed was that my sphere has inexplicable gravity to it. (after meticulously triple checking that I had clicked all the right settings)

I then went off book and added a gravity but set it to a negative -1000 value to offset this strange effect.

After adding a negative gravity, it finally started behaving like in the tutorial.

I was THE MOST excited for the material part, but around 02:30 he switches over to a pre-made material with all these settings, but never goes thru them. In the comments section, I found some help:

If you want to get the result he has at 02:40, make sure to add RGB Spectrum to the Diffuse of your Glossy Material.

And in the same Glossy Material, go here for the tile texture that will ultimately let you add waves, dots, etc…

And finally here are my tile settings, I had a hard time making the iridescent ribbons not look pixelated.

Maybe, I'm just too much of a noob, but I hope it saves you all some time and heart ache when following along!

I have OctaneX for mac. It only works on the newest MacBook Pro with the 5600M graphics card that was released in June 2020 on C4D R21. 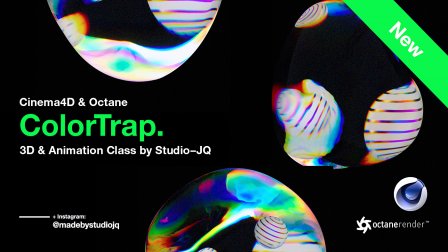