I "discovered" color mockups for my paintings

Hi! I'm a watercolor artist and haven't had any theoretical knowledge about color before, but while watching this class I discovered that I do all of the stuff rather intuitively already. I just couldn't name them :D

I'm currently working on a big fanart crossover project of the characters of the anime Haikyu!! and Dungeons&Dragons. Since I work traditionally I don't have the option to play around with color as much as I want in the actual medium unless I don't care putting hours and hours of work into it. So, what I "discovered" and what is actually one of the exercises of this class are digital color mockups.

What I do is scanning my final sketch and just digitally coloring them. When doing these mockups I really don't care about value or saturation that much. I mainly wanna see if the colors work well together. Everything else, I do with my watercolors later.

I also use the gray-scale method to see if I created enough contrast within a painting. I just take a picture of it, and desaturate it in an editing app. I also get inspiration for color palettes on pinterest.

I'm also getting better at drawing digitally which I never had the motivation to improve on. It just happens automatically when I make the mockups.

I also like to have the mockups as a direct color reference instead of a mood-board or pictures of color palettes.

Let me know if you use digital mockups for traditional work too! 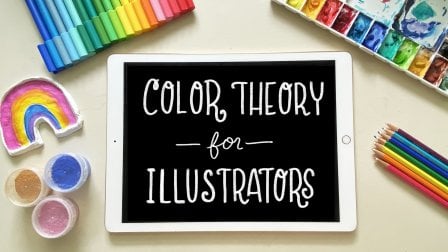