The first time that I tasted gelato, I was living in the Little Italy section in Ottawa as an undergrad. I worked part time serving in a family-owned Italian restaurant located across from both an enormous church and a park with bocce courts. Evening shifts ended with watching the old gentlemen playing under the lights while eating gelato cones with the dishwashers. Very good memories for me.

The reason that I wanted to learn how was a little less sentimental though. I have had an ice cream attachment for my stand mixer for over 5 years and have never used it once. I've certainly used it now!

I started with the plain old vanilla bean because that goes with everything and I happened to have a vanilla bean in the pantry. The base went together really quickly and easily, smelled absolutely delicious. Unfortunately, there was an accident pulling the container out of the fridge and most of it ended up on the floor.  I was able to salvage just a small precious amount but I churned it anyway. It was delicious with some lingonberry syrup and almonds over the top. The texture was so smooth that it seemed impossible that it wasn't packed with cream and fat.

So, I started to make a second batch as that one churned. I had to go old school to grind up the pistachios, using my mortar and pestle. This batch all made it to the churn! Because it wasn't ground as fine, the texture is a little rougher than the vanilla but so tasty.

Then things got a little crazy in my kitchen. I had some frozen strawberries and made a batch out of those... I found a can of coconut milk in the cupboard and whipped that up... I also had some dark Belgian chocolate and amaretto so I did a batch of the chocolate and after trying it with some maple bacon sea salt on top, I hide it in the back of the freezer now so that no one else can find it and eat any!

Two things that I noticed from all of these batches: adding pureed fruit almost completely filled the bowl of my churn and I can feel larger ice crystals in that one. It seems like smaller batches freeze faster and have less crystals formed; and, adding alcohol changed the freezing as well, it stayed much softer in the churn and it stays softer in the freezer as well.

Now that I know that the freezer will hold the bowl for my stand mixer, I will not be without a batch of gelato ready to soften and serve. Thank you so much for the awesome class, Marie! Can't wait to try the ripple version from your blog! ;D

One of the local coffee shops makes a drink called a London Fog, it's basically a vanilla steamed milk with an Earl Grey tea bag thrown in... so I made the basic base and threw in some Lady Grey tea bags (6) and a vanilla bean at the beginning. I cannot describe how good this tastes, like a warm creamy cup of tea only silky and cold. The tea aftertaste is perfect. Here with whipped cream and crumbled cookie. 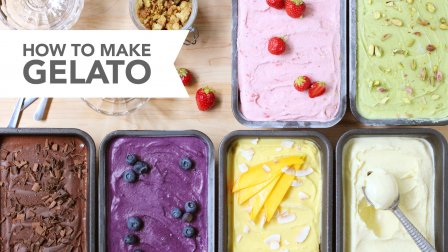 How to Make Gelato: Tips and Recipes to Make the Delightful Italian Frozen Treat
Marie Asselin