Hurricanes of the 80s

Since I was born in the 80's I chose to go with data set 1 and focus on the 80s. At the moment my sketch has the hurricanes sorted by strength. I included the table of data that I am going to include. The final project i want to have look like if it was something from the 80s. Trying to come up with a good idea on how to convey that information. Current idea is fonts and some borders/strokes around words. 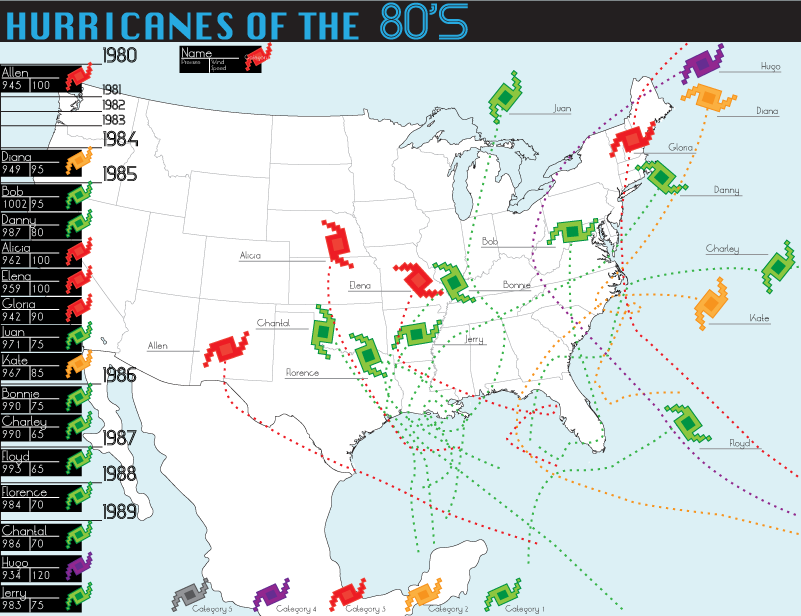 Here is the first draft for my infographic. As I was trying to think of the 80's I completely remembered all the awesome video games that came out during that time! So I decided to make little 8-bit hurricanes. I was also trying to put in the paths using lines with square patterns kind of like Ms. Pac Man but quickly found out that using big blocks (5px by 5px) really made the  map unreadable especially for all the hurricanes in the gulf of mexico. There was no good way for you to tell which path went where. There's still some difficulty in seeing it now which I'm sure is just part of the challenge of this type of data. Stuck with the colors I had originally chosen for now. Was trying to go for colors that you can find on a rubiks cube at first but there was going to be enough contrast so I had to change my mind about that. The font that im using in the blocks on the side isn't final. I was trying to find a good retro thin font since I thought I was going to be pressed for space but i think I may be able to change it up a little bit more. Also not sure of the dark background on those right now. From a lot of what I can remember and researched online there was alot of bright colors against dark colors in ads of the 80s but also a lot of pastels which may also work  out for this data set.

Sorry for posting this late, was sick all of yesterday :(

Here is the final version of my infographic! 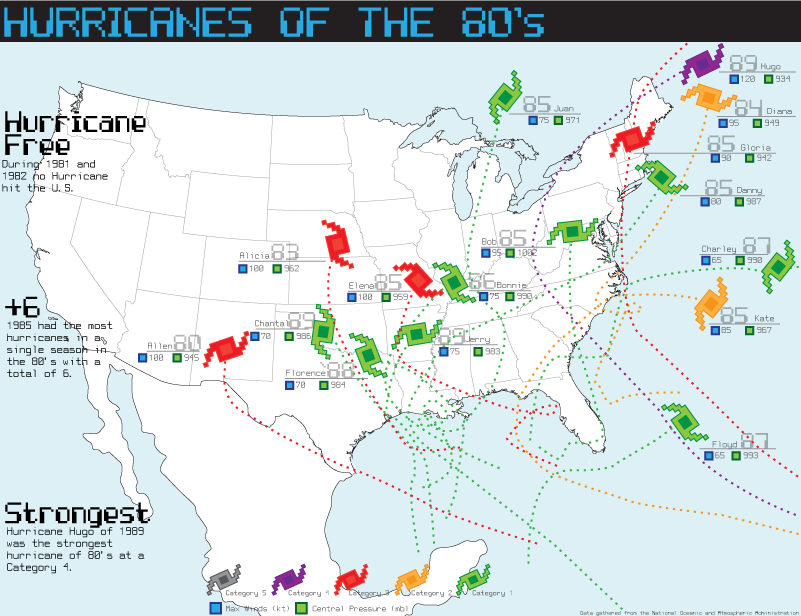 Decided not to do the timeline thing that I had in the first draft and instead put the information next to the hurricanes themselves. This opened up the side of the graphic to put in some interesting info about the data. Finally found two fonts that I liked that look like they were from old computers and video games. Had fun working on this and seeing all the different types of directions people took!