How Failure changes me from loser to a challenger role?

This story happened to me during my college days in the final year.

To give you a brief introduction about me in the college days, a soft-spoken and bright student who follows the rules and very much connected to the library. I used to be a good student in all classes and considered as a favorite student to most of my lectures. So that's enough of my characterization let’s move before you start getting boring with my monologue, let's all get back to the event where all the graduates will be very eagerly awaits to welcome in their college days "the Campus interview".

As soon as I typed the words Campus Interview, I am sure it will bring some fear factors to most of the final year students. The reason for the fear is not about the success/failure it's due to the peer pressure we exert on ourselves due to the society on which we are brought upon. The fear factor will be ten times more than the normal student for me it’s because of the one simple reason "Being Everyone's Favourite" and they expect you to be a success without playing the game / writing the exam. With more pressure and fear factor adding more spice to my scenario, let's get onto the story I cleared the written test of the so-called famous Corporate Company’s campus interview.

We are waiting for the next round of the Group Discussion with every passing minute my pulse got doubled up and my pressure shooter with me sweating like getting drenched in the rain. Now comes the announcement for the so-called Group discussion where a group of 10 students including me where called to the meeting room next to the Administrator Office. During the normal days, we will be very eager to get inside the room just because of the air conditioning and the smell of the lavender flowers, but this very far from being the normal day, and for me, you can consider as the Judgement Day (as per the bible). We are seated in the meeting table and I am sweating like hell when the announcement was made by the HR manager of the Corporate Company to start the Group Discussion on the particular topic. We were not provided with time for preparation it's on the spot discussion about the provided topic to filter out the candidates they made it look like a surprise topic.

This feels me like the HR manager just increased the pressure from 10 knots to 100 knots with a surprise topic. So here as everyone expected that I will be starting the group discussion and I cannot blame them for these expectations, I also started with the very good and confident voice for the first 15 seconds and after that, it feels like I got choked and stuck like a tape recorder in the tape with no music and the tape recorder just keeps running.

As a result of my choking incident, I was eliminated from the GD round and also knocked out from the campus interview; it’s similar to Sachin/Kohli getting bowled out for a duck within 10 0vers in the 300 run chase. I felt the humiliation of the rejection and failure of not stepping up when required, gave me more urge to be better prepared for the next company's campus interview. As luck has its ways most of the time in my life there has been no company campus interview in my college until the final exams.

As you all know the failures are the great teachers for us during the tough times. I was emotionally drained and out as a result of the failure to secure a job offer during my college final year like every bright student would have done it.

To make my failure as a lesson learned I started preparing better for the Group Discussion, I can guarantee to you that this duration was not sweet one for few a months. A lot of thoughts came to my mind during my job search period rejections/multiple rejections and during one point of time, I was thinking of giving up to my fear (ideal mind was devils workshop and that too when you’re staying alone in one of the most crowded metropolitan cities). One thing I can tell from my experience is the moment you embrace the fear, your fear will look like a small mole and not like a big mountain which you have imagined.

The trigger point of you embracing your worst fear is where you will get the strength to proceed further; this is the moment the light will be visible to you at the end of the tunnel which was a dark tunnel until now. The courage to start from scratch, I got it from the novel Oliver Twist where we need to be optimistic in the way we look at life and always aspire for higher positions and standards when Oliver took the difficult path of traveling to London for the bright future from the orphanage home.

I started to prepare for the Group discussion in the Library where you will have the most knowledgeable persons in the form of books. Again as soon as you started putting hard work and preparation you may not able to plug the fruit from the tree just because you started putting your foot forward. In the next interview again I was rejected from the Group discussion round but the change here is it not because of the choking words due to the insufficient preparation on the topics. Now with the increased confidence I started preparing for the Group discussion with a wide range of topics and took a lot of notes from the General Knowledge topics and news from all over the world.

Now I was like a fully equipped soldier with all the weapons and instruments ready for the combat to win the war. My preparation includes the lessons learned from y fear and failures. To get rid of the fear of speaking or choking, I started to practice in front of the mirror with the novel or newspaper and read the most interesting part and strategic news with proper emotions and gestures. Fast forward to the next 2 months, after multiple interviews and multiple companies in Chennai I am attending the next GD round in a corporate company for the role of Software Tester.

This time around I knocked the group discussion out of the park with better leadership qualities and confident approach by delivery of statistics and content for the topic given to us and I passed the GD round and then the HR round with flying colors and landed the role of "Test Associate".

With this, I would like to conclude the story with the tagline always take the learnings from the failures because there is no better teacher than the failure which will make to be a challenger when we learn from our failures. 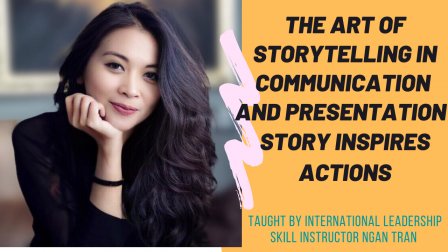 The Art of Storytelling in Communication and Presentation: Stories that Inspire Actions
Ngan Tran