Sketching toucans helped me to find the main forms I would need to draw them without a reference. They have a crescent-shaped head and beak, a cute little jellybean body and a long and sleek tail. The feet were tricky to understand but the locomotive class explanations really helped.

Some crazy things I learned about toucans:

Their long beaks likely serve as an adaptation to help them sit in one spot and reach as much fruit as possible.

They live in tree hollows made by other animals.

Their lower vertebrae are fused to make a knee-like joint.

Their tails can touch their heads and they sleep in a ball.

They live in flocks but go off alone as a couple to mate and raise their young.

I really liked how the raised tail gave the toucan more energy, almost like he's wired from eating so much fruit. I also liked the idea of a toucan listening to SpotiFly on his new Banana Phone X. The glasses emphasize his big eyes even more, but I liked the beanie better than the 5-panel cap.

I don't usually sketch using Photoshop, but I really enjoyed it -- especially some new brushes. I was on the go some of the time, so I tried a bit of sketching on my phone as well.

I was really sucked into the project today and am now wrapping up my weekend by posting my vectorized version.

Thank you for this fun class -- I can't wait to continue sketching new animals and getting a better understanding of them.

Goat of the Year during Year of the Goat 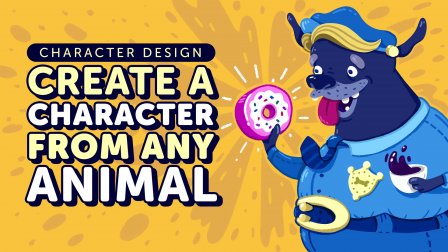 Character Design: Create a Character from any Animal
Hayden Aube