Hills, Bikes and the North of Vietnam

I gripped the handlebars and honked the horn hoping I wouldn’t find a truck around the bend, thankfully, I didn’t, but what I did encounter sent goose bumps down my spine. The road wound up alongside a river into funny looking mountains, the steep riverbanks were covered in sugar canes, a couple of elderly Vietnamese ladies scaled the inconvenient terrain to tend to their crops. The mountains up ahead were surrounded by thin cloud that could almost be mistaken for fog. Along with the great company and banter Shyam, Harry and I offered we had 3 125cc Honda Wins (a.k.a the sexiest little motorbike of them all), 4 days and 750kms of road ahead. The North of Vietnam was going to be epic.

The 4 days ahead of us would provide some of the most authentic sights and exhilarating feelings I would ever get to experience, we’d set off with our only information coming from a blog thanks to the experiences of ‘The Only Pete’. Everywhere we rode was classic Vietnam there were rice plantations or sugar canes lining valleys and hill sides, a hidden cave lay awaiting after a short detour through cheeky little pass (somehow, we still had to pay for parking), there was an endless number of young children who dropped what they were doing just wave as we rode by their mothers often working hard carrying loads of produce that were way too heavy for someone of their stature.

Within the first day we had already seen so much. We weaved up and around the mountains, cruised through poverty stricken towns with some of the happiest people I’ve ever seen and over took endless amounts of bikes carrying all sorts of crazy things on the back from dead pigs to families of 5 – at one point I was almost knocked of my bike as I went to overtake (undertake truthfully) a lad with a bunch of bamboo stretching close to the length of the road. Best of all though, by the end of the day my jumpy starts had become less and less frequent. We managed to cruise into the small yet busy town of Dong Van just before sunset and find a hostel (right outside an early waking market).

I didn’t realise how far 750km actually was until part way through, couple that distance with the fact that we could only travel around 30-40km/h for most of the journey, we were on our bikes for a long time and my butt got really sore from sitting on my bike (which was now called Thunder Horse). We left Dong Van on Day 2 and headed north to the Chinese border, It was up here were the first accident occurred. We’d made it all the way to the top right up by the Chinese border (which happened to be nothing but a  stunning valley in a mountainous landscape), Shyam and I had parked when Harry attempted parking. He somehow managed to come off the back of his bike still holding the handlebars and revving the engine. The back wheel all the meanwhile grinding away on his leg, ouch! To this point no one really knows how he came of the bike.

After checking out the misty Chinese border we rode back to Dong Van through the fog and stopped for lunch before taking a different route through more mountains and along more rivers to the small town of Bao Lac (this town was fantastic! There were literally no other tourist or tourism set up), the only real noticeable change on day 3 when we were headed to Ba Be Lake was the insane amount of roadworks that were going on. Heading back to Ha Giang provided a bit of change (mostly because we missed our turn off and then the plan b turn off), instead of rivers and mountains it was a highway for a significant part of the day, the loss in stunning scenery however did allow us to hit the throttle a bit harder than we had previously been able to. Despite making it to the final day Thunder Horse and I didn’t quite make it without a small incident due to my slight overconfidence. I decided I would take a corner harder and faster than I should of and ended up off the side of the road smashing my foot against a concrete bollard, this should of really hurt but adrenaline got me through until the end of the ride where I started limping profusely.

Despite all the similarities, every destination was something unique, Dong Van was built around a farmer market that sold all kinds of animals and produce – these animals could also be found playing chicken with the bikes on the roads, I found the town to be very busy even with its small size. The Chinese border was an extremely popular spot with no shortage of visitors but it did lack an actual border, a valley between 2 ridges was all that divided the countries, a tiny road made its way through the border with no attempt of border control anywhere in sight, you’d be forgiven for not knowing it was a border. Bao Lac and Ba Be Lake were complete opposites, in Bao Lac it was pure Vietnam, nothing was dressed up for tourism the markets were small and the restaurant options were almost non-existent, they spoke no English (I genuinely have no idea what I ate that night) whereas Ba Be Lake was a common tourist stop off that was set up to look authentic. The Lake was a gorgeous sight surrounded in mountains covering the horizon as opposed to the manky river in Bao Lac that had a serious case of pollution, yet in the face of all that, I enjoyed Bao Lac’s vibe more.

Even though we got lost and went the wrong way on the final day it didn’t take long to get back to Ha Giang where our journey had started, the highway probably played a part in us making up time as we did hit speeds that made Thunder Horse feel like she was about to fall apart. By the time we got back I couldn’t think of anything worse than handing Thunder Horse back to the bike shop, so we all decided to take the bikes for one last ride to find dinner.

The ride around the North of Vietnam was a fantastic journey and even more incredible as it was all self-directed. Everything we saw was true Vietnam and not dressed up for tourism, in fact of all the people we meet, none were doing the same route as us. The scenery, the sketchy roads, the competition between the locals for who could get the craziest thing on the back of their bike all contributed to an experience that was insanely cool. This was easily my favourite travel adventure I have had and I would hugely recommend trying it out! Now to get my bike licence back home. #hooked. 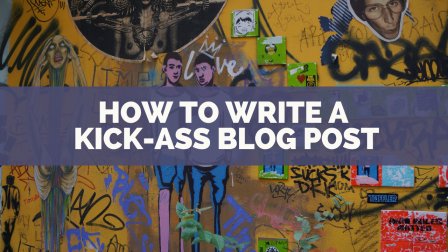 How to Write a Kick-Ass Blog Post
Maddy Osman