So, I haven't gone with the suggested project for this class as I mainly took the class for the portrait lighting patterns lesson, which was SO helpful!

I am planning to do some headshots for my aunt who is an actress in the near future, so wanted to learn about simple studio lighting setups that I can do at home, as I've never done this type of photography before; I also took Bernie's class on posing individuals, which is also great for some ideas in that area - I see these two things as being the biggest hurdles to me getting some good headshots.

I had planned to do a practise session with my partner to try out the different lighting patterns, but this didn't pan out the way I'd hoped, so I ended up doing some self portraits instead, using a tripod and wireless remote, and the LCD screen on my camera turned forward facing, meaning I could roughly see my framing and pose (although with my poor eyesight this still proved to be a challenge on such a small screen; next time I plan to learn how to connect my laptop and remote shoot onto that, if possible, so that I can see what I'm doing a bit better!).

I already had continuous soft box lighting, which I normally use for product photography, so spent some time trying to recreate the different lighting patterns shown in the class, with varying degrees of success; although, I did find that I probably wasn't able to make the height of my light as high as it should have been for Butterfly lighting as the ceiling is quite low in the dormer room I was using.

For this practise session I didn't bother with makeup as I wasn't planning on getting any 'final' or 'finished' shots, my main aim was to work out what kind of lighting was flattering to my face shape. I'm not going to show examples of the bad lighting that didn't work here as the results were too horrific, but I did finally stumble upon something I was happy with, and was amazed at the massive difference that using the 'right' lighting makes on getting a flattering image. I feel like I really learned a lot with this exercise!

I used my Canon 760D DSLR, with a 50mm lens (lowest aperture f/1.8) on manual mode. As I was shooting myself, I had to use the automatic focus on the 'tracking' setting that has facial recognition, which I think worked well for the most part, but was a little unsure whether my eyes were in focus enough in some of the images; I may choose to use manual focus to rectify this when not being both the photographer and the model!

Below is my favourite image from my first practise shoot and some notes about why I think it works bearing in mind what I learned in the class.

See below for the same photo after some minor edits, using a colour preset effect in Lightroom. I think this makes it warmer, more punchy, and helps with the look of my skin with no makeup!

I know I was using the 'short lighting' talked about in the class as the camera was closest to the darker side of my face, but I'm not 100% sure what lighting pattern I used in the end - I had the light straight in front like with flat lighting, but the camera was slightly to the side at an angle rather than in front, so if I sometimes faced the camera, rather than facing the light in front of me then it may have been having the same effect as if the light had been at an angle like in loop lighting. Does that make any sense?!

...and here's another photo using the same sort of lighting, that I have converted to B&W, and done a few minor edits; I felt this worked a lot better than the original colour photo for this image, making the highlights and shadows stand out even more and again flattering the bare skin.

I am going to do a second shoot, now that I have an idea of what lighting works for me, where I will wear a small amount of make up and perhaps also experiment with changing the background colour, so that I can see the difference between the feel of a light and dark background. Watch this space for a few examples later...

I'd love to hear your thoughts...

Thanks for a great class Bernie! 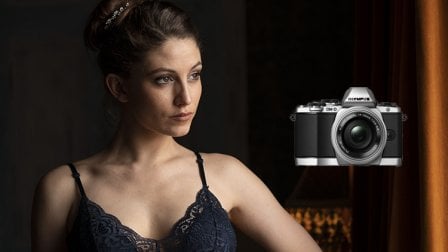