Updates are at the bottom, so scroll down for the latest versions. Thanks for viewing and commenting!

I'm an illustrator.  I've integrated words into my illustrations before, but rarely with much intentionality about the letterforms themselves rather than just how they fit into the composition. So I'm here to learn, and am very excited about it.

One of my specific hopes for my illustration career is to do book covers. Though I know the titles of books are often typeset after the art by the designer, more and more I'm noticing illustrators I admire building the title into their art. I'd love to add some basic lettering skills to my repertoire.

I'm working on redoing my portfolio website right now and considered lettering my name as my project, but that's just going to make me look narcissistic. ;) And I think something with a little story to it might be more fun anyway. So I chose a line from my favorite movie, The Princess Bride: "Have fun storming the castle."  Here's a first sketch. I'll do at least one more before we wrap up the sketch phase, because your first idea is rarely your best, right? 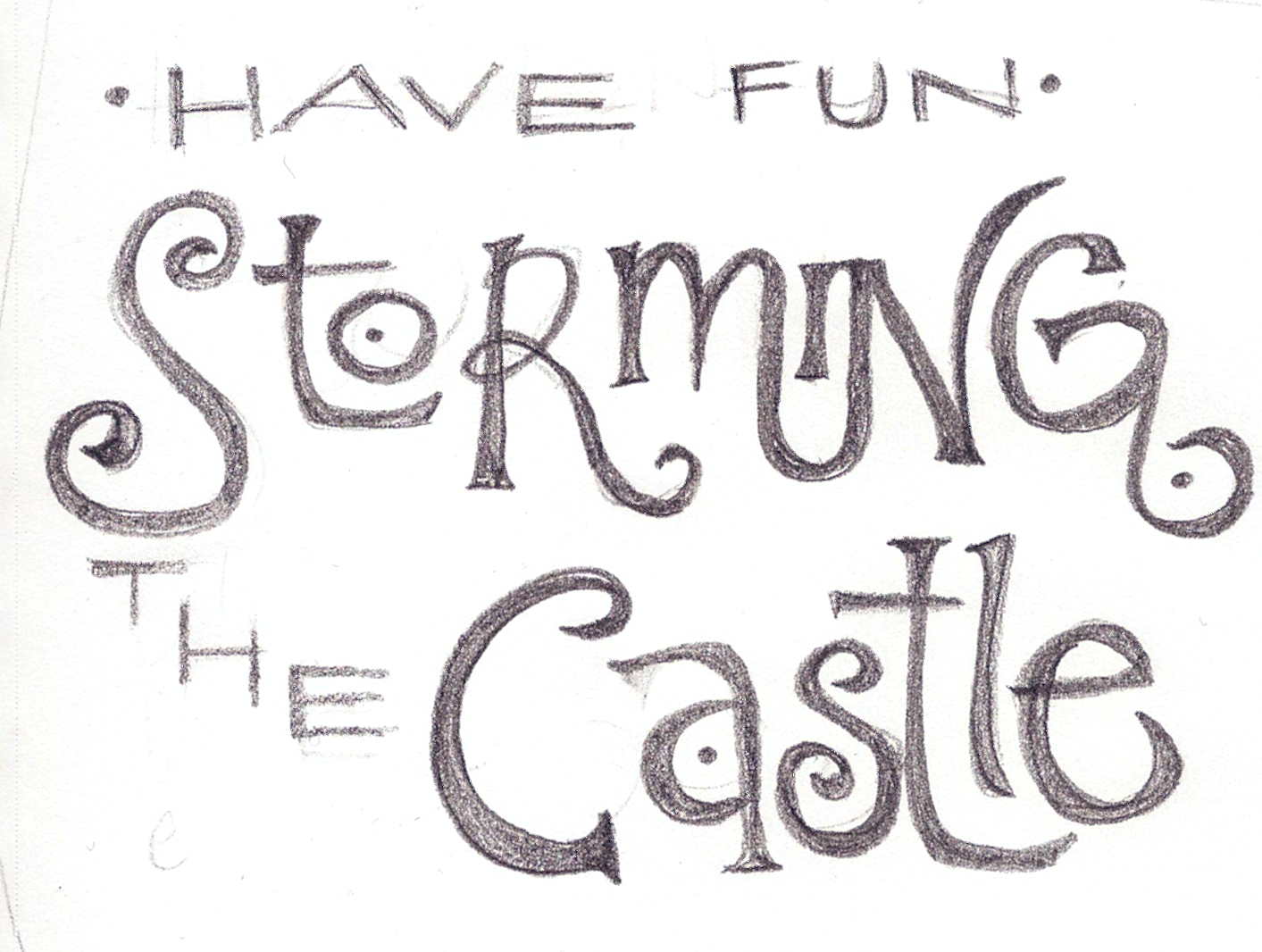 Looking forward to sharing this class with you all! 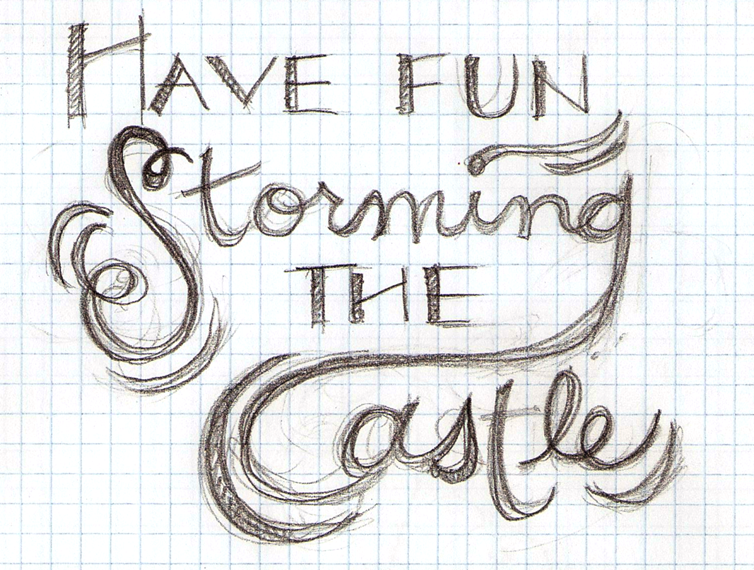 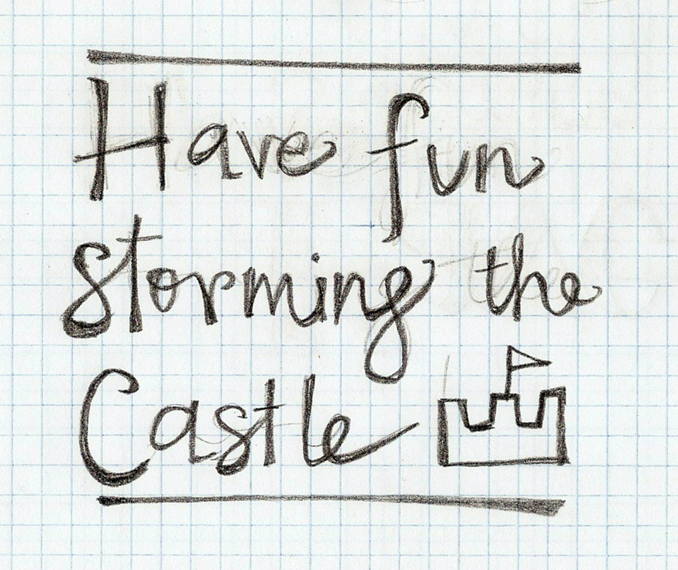 Update/Sidetrack: I haven't abandoned my original project or anything, but I was playing around with just writing different words in different styles for practice.  At the same time, I was watching tonight's DR vs. USA World Baseball Classic game. And I ended up with this, and I like it, and I wanted to share. 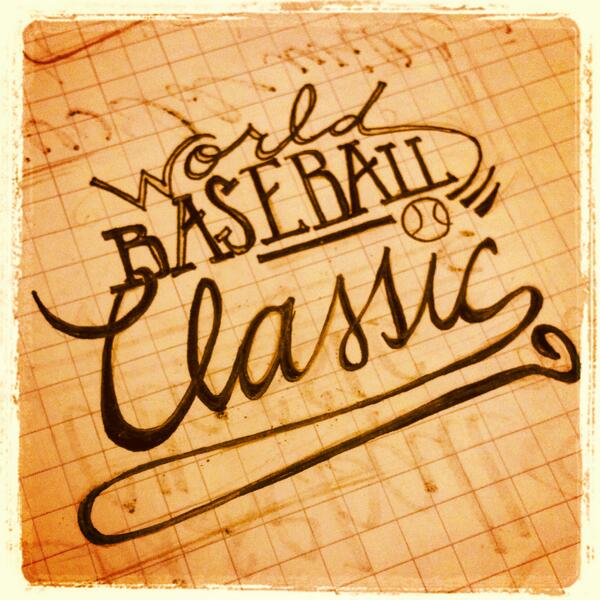 But I'm still sticking with the original phrase. I swear. I'll post an update on that next.

Update:  Refining one of my early sketches. I don't know how else to improve on a drawing but by using tracing paper, but man oh man does the weird lead that came with the lead holder not agree with tracing paper. In general, I can't emphasize how little I'm sold on the usefulness of the lead holder vs. a regular old drawing pencil.  I'm willing to be convinced otherwise, but so far so blech. But I digress.  Next drawing: 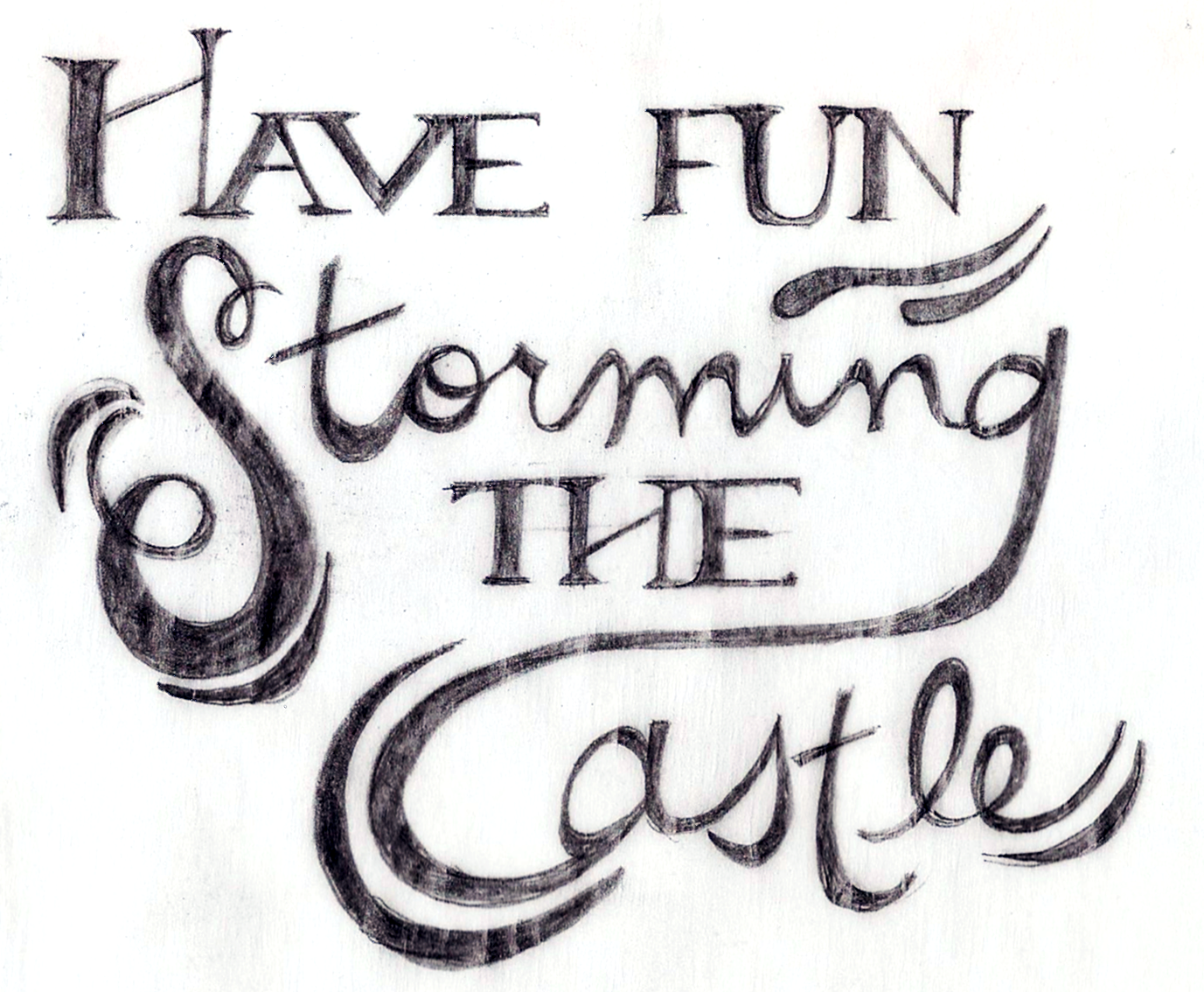 Update: After tons of playing around with other words and tools (you can see some of those practice words over at my blog) I returned to my initial phrase with some slight changes. There are some slight imperfections that I hope to clean up in Illustrator (script width is not how I'd like in a few places, some angles are slightly off, etc.). These come more from a slightly unsteady hand than from a failure of imagination, though-- I know what I WANT them to look like.  Any thoughts before I go to vector? 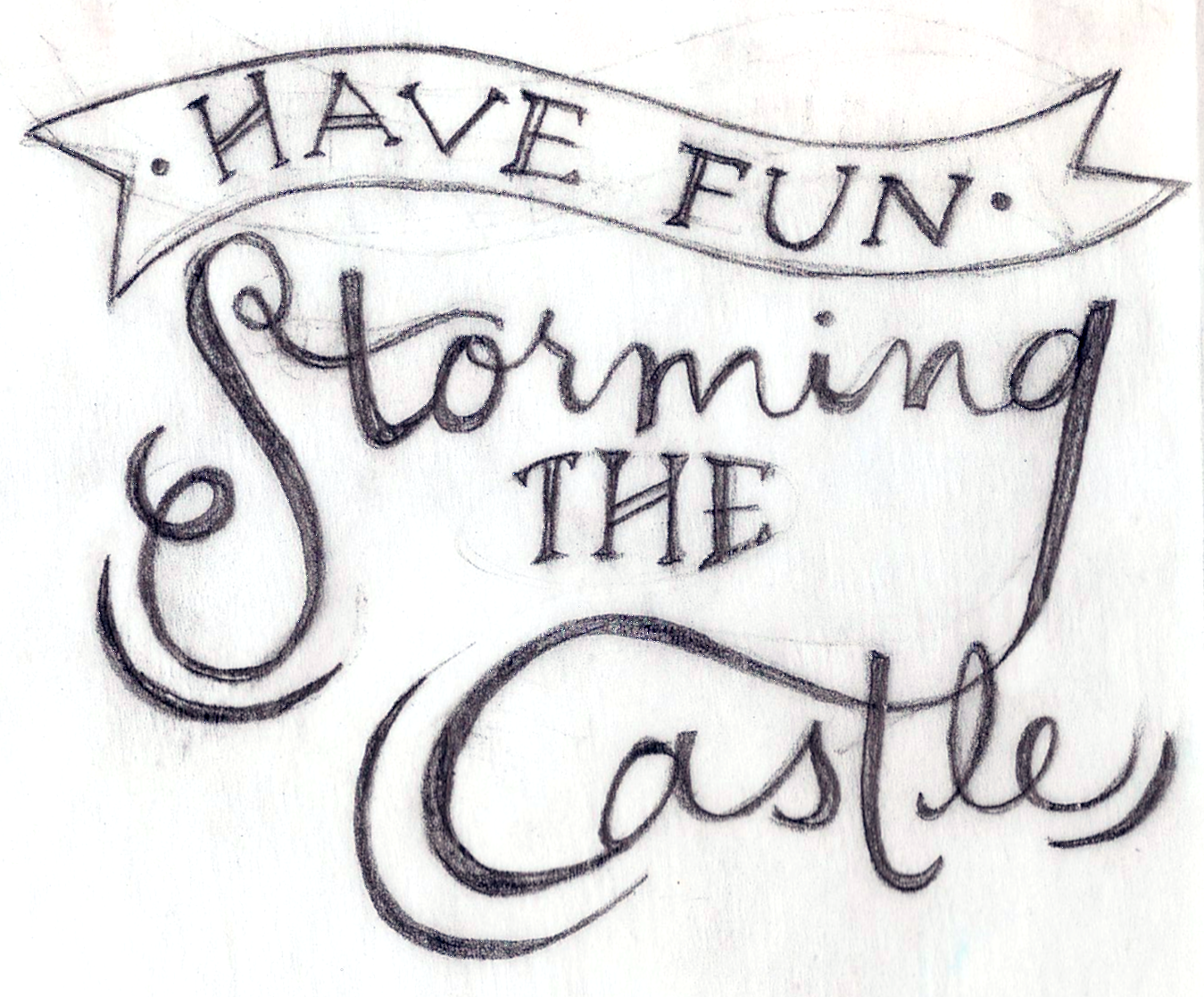 Update: Finally got around to watching the second lecture tonight, then gave ye ole vectoring a try: 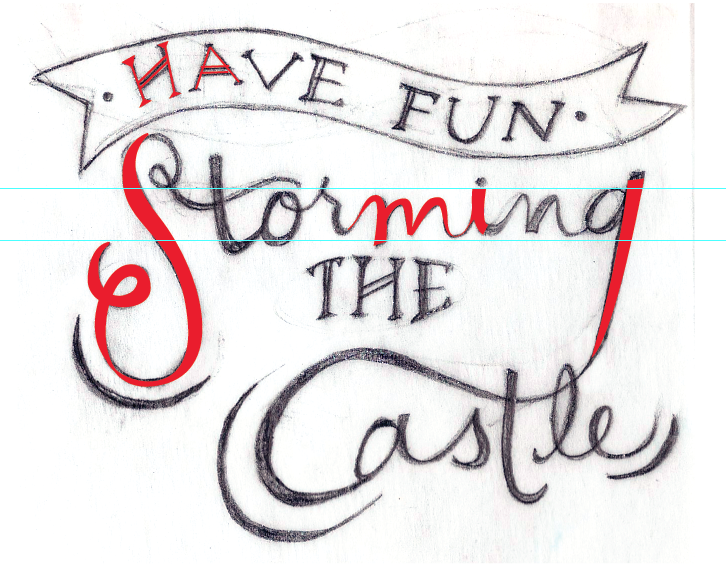 Eep. I never ever illustrate digitally, outside of color-correcting my scanned pastel drawings, and there's a very good reason. I have had a hate-hate-ohgodhaaaaate relationship with the pen tool since I was first introduced to it 12 years ago. I have vivid memories of being asked to use it to draw an apple and wanting to throw the computer to the floor and stomp on it. Drawing shouldn't be so difficult. Neil's vectoring lecture introduced me to a few new tips I wasn't aware of that make the pen tool a tiny bit less scary (the idea that you could break a composition into multiple pieces and then join them  was a bit freeing, as was the idea that you could abandon a path and then return to it later-- revolutionary and stress-reducing!) I'm by no means abandoning the vectoring stage. I absolutely plan to play around with this some more to see what I can do. But I just find the pen tool so unpredictable and frustrating. Every demo I've ever watched (online and in person) makes it look so easy, but for me at least, it's not intuitive at all. The more I play around with it, the worse it gets. Those curves never go where I expect them to.

Anybody else going to do their final project by hand? The more I poke around with the godforsaken pen tool, the more I miss my pastels.

(P.S. I swear I'm not this much of a luddite when it comes to other things--just drawing!)

Update: Still trucking along. My goal now is to quite simply finish this, and if I'm lucky get some kind of insight into the pen tool in the process. Then I'll move back into hand-drawn work to complete a lettering project I can be proud of. 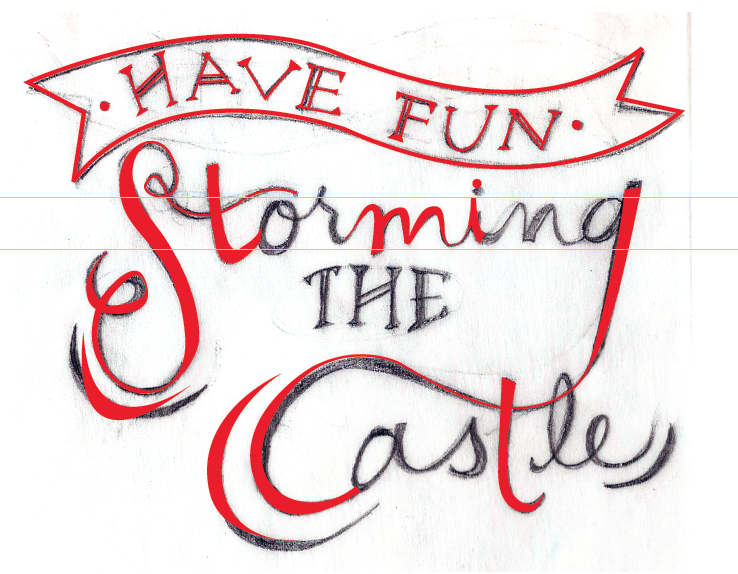 Update: Decided to implement Courtney's suggestion of straightening out the C, and also took the opportunity for one more round of adjustments across the board.  Tightened up "castle" a little, standardized the heights of the lowercase letters a little more, revisited and tried to standardize the letter widths, and traded in the extra lines (which I was struggling to match with the curves of the letters) for some fun circles. Next up, final art in pastels!  And maybe another try at vectoring. Maybe. :)

p.s. Not sure what happened to the bottom of the U in "fun." It should be there. 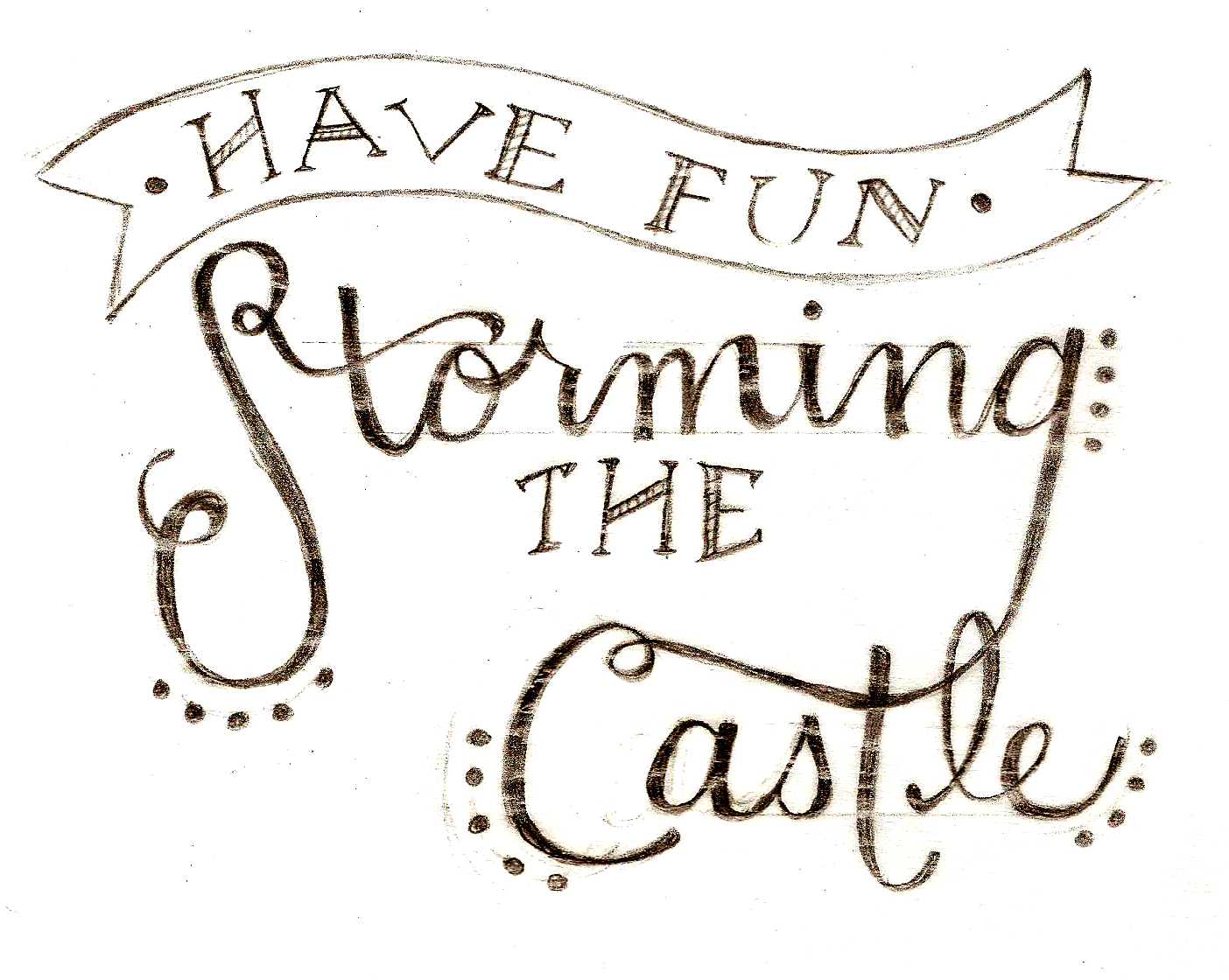 Update: finished art!  Or at least, close to finished art. Would love comments in the remaining hours of the class. :) 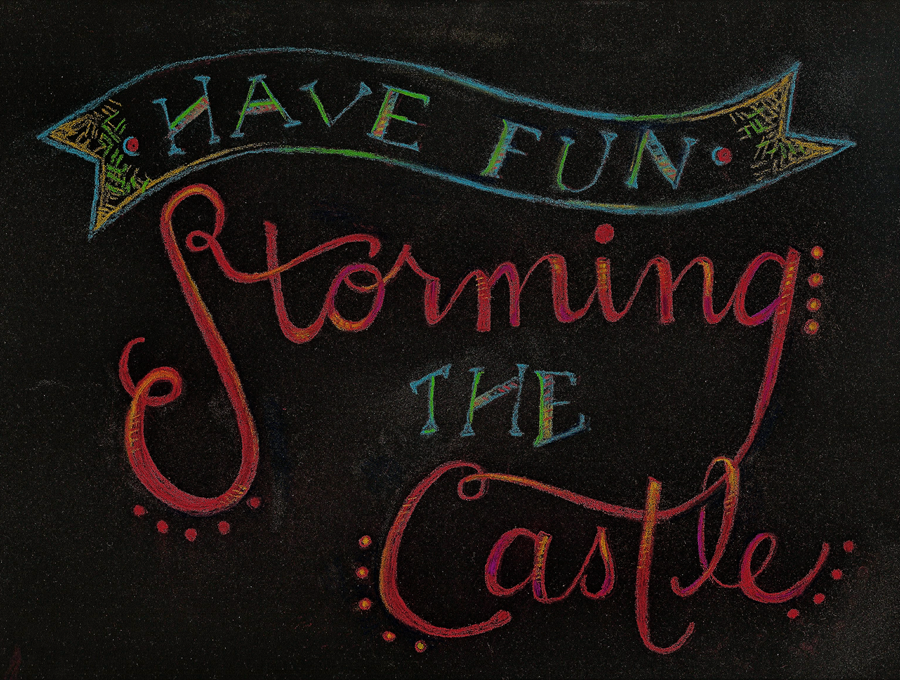