This was such a fun class. I enjoyed the whole play of it and I love my creatures so much.

I am going to include both the scan and an unedited cellphone photograph of each creature. I forgot my scanner can't render the florescent pink but the day isn't conducive to good photographs.

I decided this creature was snail though it really reminded me of that scary crab thing from Moana. I like how he looks both kind of like he will eat you but is too derpy to catch you but it will certainly try to distract you with it's fluorescent light show.

This creature is basically a bloblous glue-trap on legs which ambles along on it's multiple feet which can never make up it's mind on which way it should go. Along it's way it picks up the little blue and pink guys who blow along the path like multi-colored tumbleweeds. Sometimes the creature becomes more tumbleweed creature than sticky-glue but eventually the tumbleweeds manage to unstick themselves and tumble along leaving the sticky-glue to stumble on alone once again. 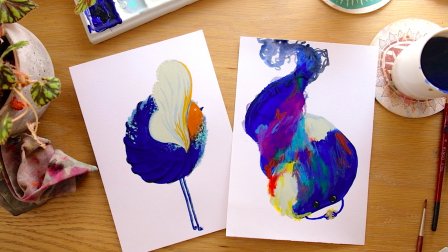