I used my own reference image but tried to mostly follow the techniques...I don't have the same type of watercolors or even the same colors! I have half pans. I have been using watercolors for a week haha and while I think my experience with oil painting helps when it comes to details it doesn't help since watercolors is opposite! Oil painting we work dark to light and watercolors is light to dark with negative space. The hardest part for me is not really having an opaque white.

I hand drew the giraffe here, a strange angle. I noticed later the eyes aren't quite right but I'm okay with it. I used a 5.5x8.5 strathmore 400 series cold press. I am struggling most with not using too much water...I keep getting hard lines which tells me my pigment is moving to the edges which also tells me I'm using too much water.  This took some work, and I used primarily burnt sienna, yellow ochre, and ultramarine blue with a little paynes gray. I don't like his ears though, perhaps I should use a little yellow ochre to warm them up as they don't seem to watch his body much.

I want to do more giraffe's! 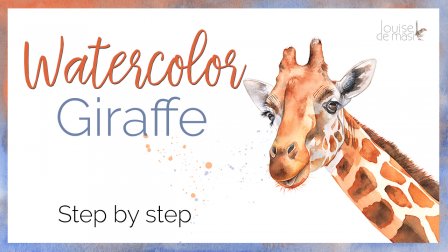