Looking at all the movie posters, I was missing the protagonist's name Mattie Ross portrayed by Hailee Steinfeld. Although my poster should be supporting her, I wanted to keep any actor names out and just concentrate on her through illustration.

Creating the textures was fun. I like to get my hands dirty and that's exactly what I did. There's no picture of the actual mess, so here are some of the digitized versions.

My basic composition looks a lot like Andrew's. First because I like it, second because I wanted to focus more on adding textures later on.

Mattie's braids represent a grand drape in a way, presenting the movie's title. Also, I wanted to achieve an aha-moment, in which one discovers the braids at second glance. One of her quotes, which I think fits the aesthetic as well as the theme, is placed on top but not too direct. Following up are title and creator, where most of the attention should be drawn to. The subtext is placed at the bottom of the poster, as it simply is a matter of information.

Adding texture and distressing my artwork was a new step for me. I had to switch between PS and the class video quite a bit, but figured it out in the end.

Okay, this part still gives me the creeps. One thing I didn't see was that I had to fill in a white background into my layer groups before setting their modes to "Multiply". Another thing I still struggle with is to have a dark background and make the text as well as the illustration bright. For some reason it doesn't work in Hue/Sat properly, which is why I had to do it in a complicated way through the JPEG file. (Still on the hunt for an answer.)

Seeing the colored version, I had to clean up some of the texture as it was too messy and legibility suffered. Now it's much cleaner (, but still dirty).

As much fun as it was learning something new, it was frustrating at times to understand what PS was doing. I will however try this method out over and over again to ease into it (and probably just to have a reason to eat more chocolate and drink more coffee). 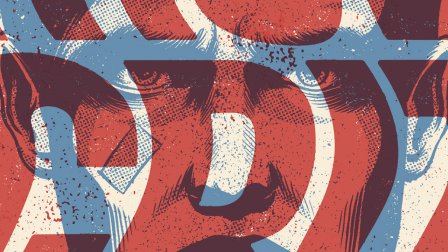