First time trying to draw plants and fungus, used procreate on iPad with pencil, really new to this but I don’t mind how it turned out. I couldn’t figure out myself how to blend the outlines with the fill colour/shading on procreate like was done on photoshop but I’m sure it’s something you can do.

Still on the fence about the coral fungi might change it up at another time and maybe put in 3 flat top mushrooms instead so I put in a pic of how it looks with and without, without makes the mycena look a little odd with the shading on them but you get the idea!

Learnt a lot from this class thank you! Also Learnt that I’m obsessed now not just with real life mushrooms but drawing them and with Pinterest oh my goodness.

The Orange Chanterelle was my hero fungi, had the purple coral fungi, some mycena I think the little white ones are called and some moss and lichen around that

One day I’ll make something beautiful 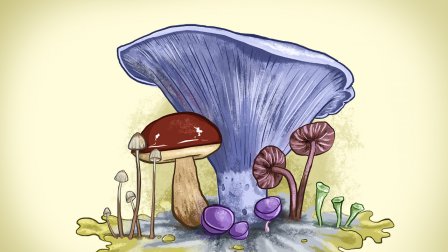