I took this class in continuation with the Brush Lettering Basics class.

Here's my poor attempt at Ombre Bouce lettering with ink and a brush following that class. I think I should also have considered that the paper was non absorbent, so the inks don't blend, but rather collect in layers when overdone.

This is one of the practice spreads with the alphabet styles I did in my BuJo grid journal. I did struggle quite a bit with getting a smooth transition between thick and thin parts of the strokes. I probably should have attempted the same at a 4 grid scale instead of one grid scale. This is with the Tombow Fudenosuke soft tip-

Here's what I did in the end with the black Tombow ABT pen. Smoothness is still a longshot, but I think I've had some progress.

Thankyou for the class, Peggy. 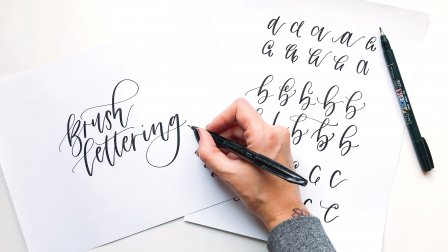