I drew my croqi (sp?) on paper with a mechanical pencil -- nothing fancy. Then I took a picture of it with my cell phone in crappy lighting. But I used that as a background image to draw on top of, like you showed in your class.

I tried my first fashion illustration in Adobe Draw for the iPad. I like it alright, but I wish it had some of the watercolor features that your paper app does. I can't blend or smudge, but I tried to create a painted look with using brush strokes and playing with opacity.

Also, I tried pants, which I think flattened the perspective of my character a bit. Maybe the way I drew her clothing didn't follow her form, or maybe the shading is wrong, but I would like to play with the movement of the clothing more in the future. I loved the lesson on how to draw the elements of the joints and muscles in creating a figure with attitude! It demystified the problems I had had in my previous attempts. Excited to try more -- and I'll be checking out your book. :) 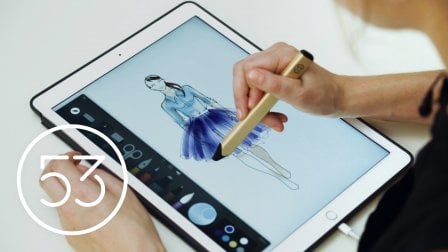