I absolutely loved the creation in your video, and it immediately made me think of a similar (but somewhat darker) scene I copied recently from an album cover.

I had almost everything I needed already - I even found some red card that I could reuse and a tissue box I retrieved from the recycling bin. The only thing I was lacking were the lights, but I found a box of 1m fairy lights online and they arrived really quickly.

After some trepidation (had I figured out the layers correctly, could I work out which sections needed to be cut, was this all horrible over-amitious for a first attempt, would it end up in a torn and soggy mess?) I roughed out some sketches and worked them up in more detail on card.

I wrapped the box with inside out Christmas wrapping paper, and struggled to get it sharp and tight against the edges, which played havoc with my later measurements. I should have measured things better before wrapping! Although it also didn't help that the box was quite flimsy so the edges bowed a bit.

The tips on cutting were really useful - I was almost chanting "cut from strong to weak" at times. I had one oops moment on the first layer I cut. Having cut really carefully around a plant for some reason I chopped the shape out to leave a silhouette, except the silhouette was in a section that was destined to be removed! I hung on to the piece and glued it back in place later.

Making the dividers was the fiddliest and most time-consuming section, but not as bad as I feared. I had imagined all the pieces flying open or having to hold them for hours before the glue set. Hair pins might have been useful to secure them, but I couldn't find any, and the tip on scoring before folding seemed to encourage the card to stay roughly in position.

Then I put the first section in and realised that I'd got the width wrong and so it barely reached the edge spacers. After a bit of trial and error I made edge spacers of a rectangular section so that the section would reach but I could keep the top and bottom spacers quite narrow.

Cutting and sticking four spacers at a time seemed to give enough time for the sections to stick so I could cut, stick, layer, repeat.

Overall I am fairly pleased with the result. Wondering whether it would be better in black card and whether/how I should decorate the outside. I also have seven more sets of lights, so I think I'll have to make at least a couple more scenes. Thanks for the course. 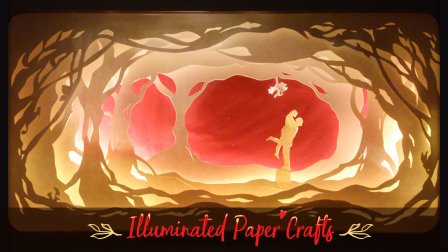