I have never tried doodle art, but I always wanted to. The reason I never did it is simple: I just didn't know where to start. So this course was a great kick start and really helpful for that!

Now to my class project. While doing the exercices, I quickly found the round doodle shape with the stripes going out from the middle really interesting. And after some trial and error, I found that on its own it reminded me of a flower shape. Sot that is where my idea for this piece came from ^^

I started with the border, since I knew I wanted some kind of frame for the piece. But I left it blank for then. Then I doodled the flowers itself, just placing them where they would look nice. Then I did the stems and filled them in with color. I found that this striped look would look great if I repeated it, so I just did. The lines naturally got longer and shorter, so I went with it to make the texture of the grass. That looked a bit plain to me, so I added the triangles and zigzags to give it more visual interest. Then I just added the bees and the cloudy thingies and the main part was done!

Now to the border. I knew I didn't want it to be full of stuff, but it should look quite decorative, like a fancy frame. So I started with the corners and decided to  make small patterns on the left and right side of the frame. Then the middle part looked like there was something missing so I added the two stripes and the dot there.

That was all there was to it. I am really surprised with how fun this can be, even though I still find it really tricky. I don't think I would get something that would look good without having a concept behind my piece and I adore everyone who can just randomly doodle something great! I don't think this is something I will do a lot, but it was really fun to try out^^ 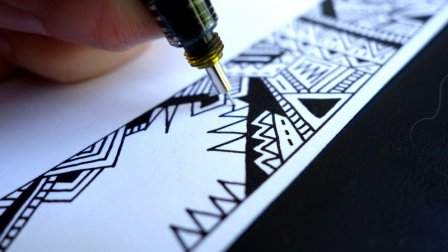