I decided on an ampersand as I feel it best suits my personality, somewhere lost in that grey area of "Is it a letter or is it a symbol!". I love the fact that you can have so much fun with the character, there doesn't seem to be a particular way that it has to be drawn, so is open to many interpretations.

I found this bit the fairly straight forward as I'm used to working in Photoshop and had the advantage that I already had a bunch of flowers pre-cutout as last year I put together a typographical floral product for my shop over on Creative Market. (Drop me a message if you want some of these!) I used some of these plus flowers I purchased from my local florists.

I think choosing a character like Gemma did with large amount of curves actually works to your advantage due to fact that flowers and foliage seem to be curved most of the time.

I found this the most challenging part as I don't normally do illustration work, my focus is mainly on calligraphy and type design. So this was definitely a big step out of my comfort zone. It took me about 6 hours to complete the inking part. I think I'd made my collage too complex with some really detailed flowers throughout the whole piece. I use Staedtler pigment markers as I already had a pack of these and they are fairly similar to the Micron ones.

I really enjoyed doing the class. I learnt loads about illustration techniques and just the process of trying to add different textures but keeping a consistent look. My illustration game has taken a step up and also made me realised (even more) that Gemma is a legend in her field of lettering and illustration! 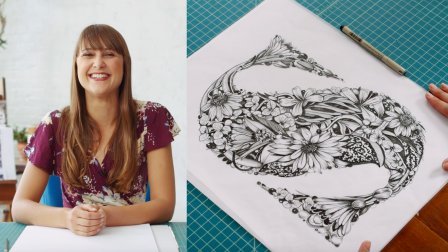