I chose to use the Flaming Lips for my poster. My day to day design work is mostly very formal and structured. The Lips are the exact opposite of that and I thought it would give me a chance to do something very different from what I'm used to.

Most of their current posters are handdrawn, including the typography, or I've also seen a photo roughly worked in amongst the type. On some of these posters I think they are done almost directly from the first or second round sketches.

I don't want to copy their illustration style exactly, but if you look at different posters they have, the handdrawn type really connects them all.

They've also been using Stencil on their albums and promo products they've been putting out lately, but I don't think I want to incorporate that in this particular poster. 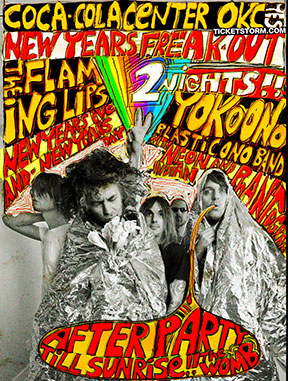 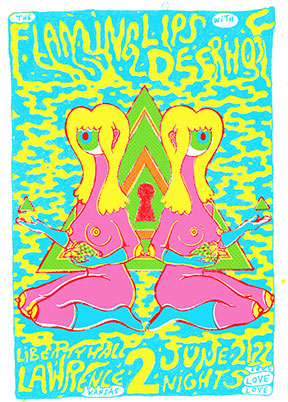 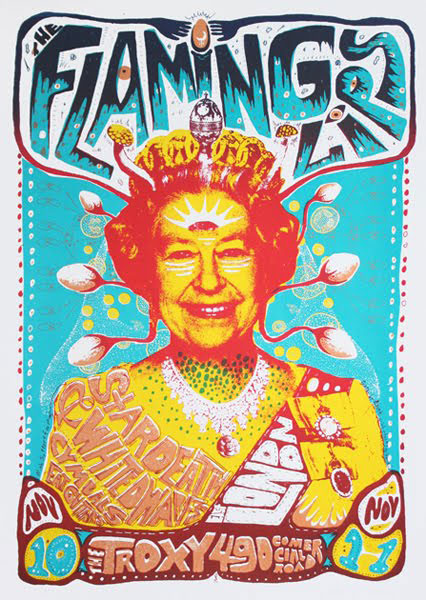 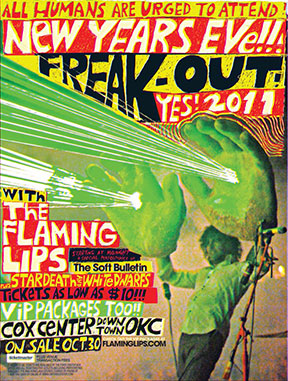 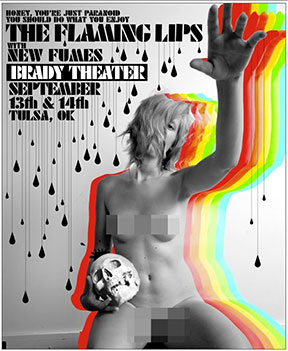 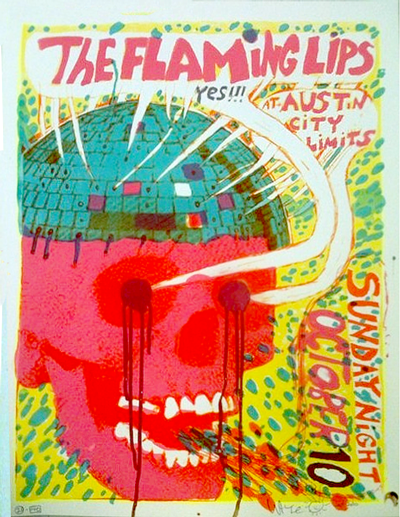 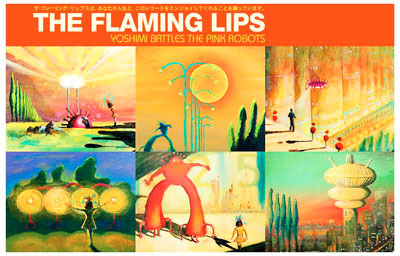 The concert I'm focusing on is the April 29 gig at the Egyptian Room in Indianapolis. Now, I haven't been there and the room looks like a pretty cool concert venue but I don't know if there is anything Egyptian themed about it. Nevertheless, I decided to focus on an Egyptian theme for the poster. The Lips have a lot of songs that focus on life and death and spirituality and I think that ties in really well with some of the Egyptian cultural elements.

One thing I want to stay away from though is stealing Egyptian symbols and things when I really don't know enough about their meanings to use them correctly. I'm just trying to tie into some of the more artistic themes and general cultural elements.

This is fairly trite I suppose as an idea, but I'm throwing it out there. Instead of throwing Egyptian symbols in there though I'd use symbols that relate to fans - like Lazer Handz, the inflatable ball, etc... 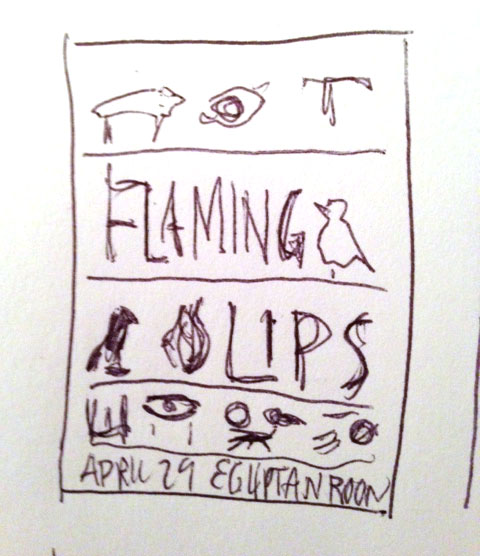 Wayne Coyne tends to be the band's frontman for most interviews, photos etc. I thought it might be cool to illustrate him as a mummy. I think the mummy and skulls focus on death but I'd want to make the poster lighthearted and cheery by the illustration style and bright colors.

I've done a second sketch that includes all 5 band members. I don't know how the band feels about being represented. I don't think they mind Wayne getting most of the spotlight but this would be a good way to incorporate everyone. 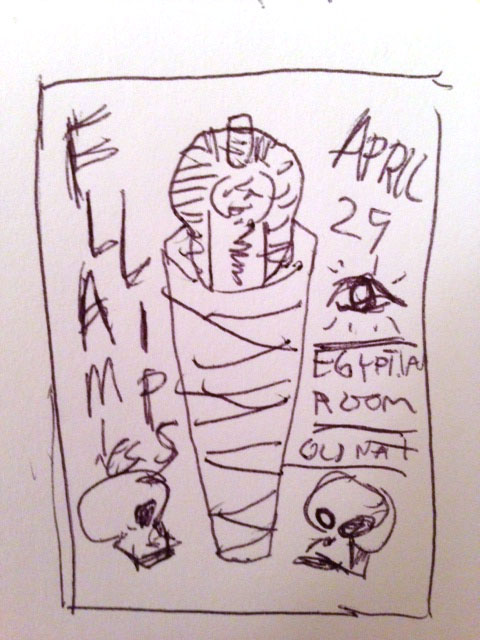 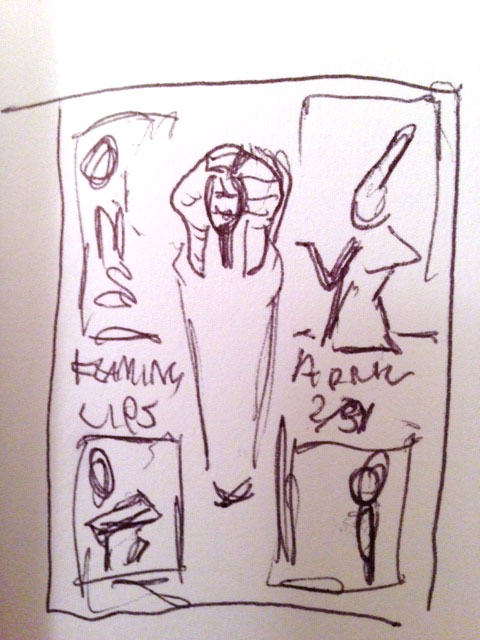 This is similar to the mummy idea but would focus more just on Wayne as a more detailed headpiece. I think it could look pretty cool. 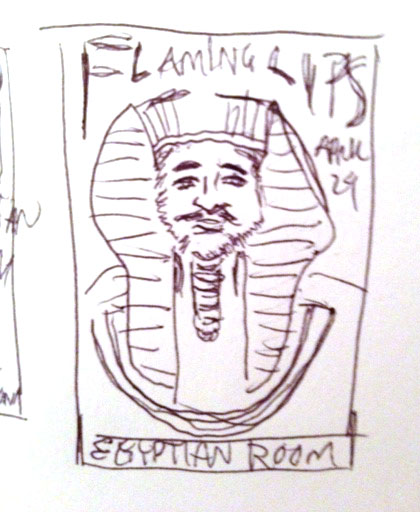 I've noticed a great deal of Egyptian art focuses on flat profiles of everything. I thought a good approach would be to illustrate each band member in that manner. This poster would be horizontal. 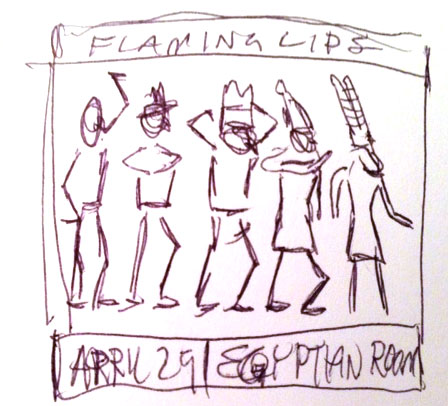 This might not have as literal of a connection to the band but I think the band would love the idea of a "giant eyeball". 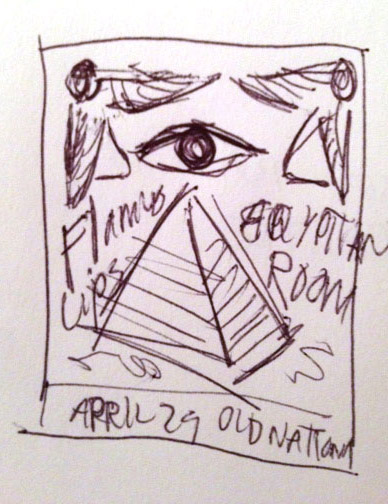 I sat down to do some follow up sketches, but have been kind of stuck on what to do with the typography. I'm thinking it will be something that is hand lettered, but I don't want to just copy the Lip's exact style. I've seen posters that other artists have done for them using hand illustated type, but they've all put their own spin on it.

However - I have progressed a little on the illustration portion. I'm going with concept 2 - the mummy. I got the idea that the mummy will be bound with cassette tape for the wrap and I might possibly even work that into the type somehow.

I've created a model for the mummy - but I'd like to add the head dress and Wayne's face. I'm thinking about drawing that b/w with a sharpie. I tried just creating it in photoshop but it didn't look right. I'm not sure if combining the two mediums will work - the model with the drawing, but if they don't then I think I'll just sketch out the whole thing with the sharpie and use the model for reference.

This is a rough photo of the model I made last night. 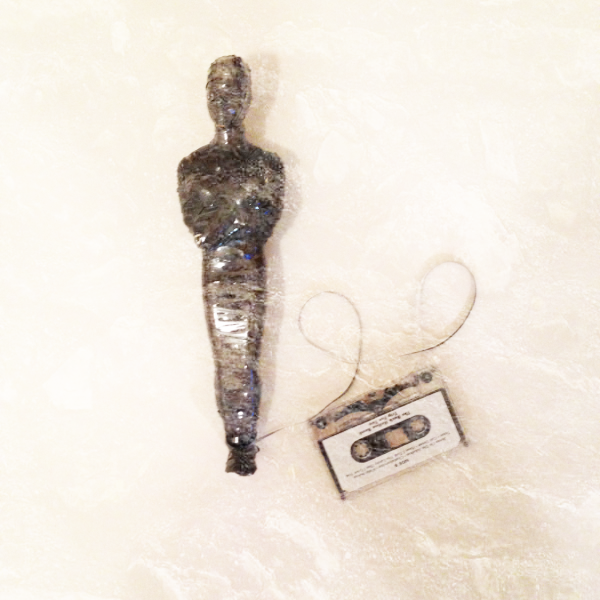