This is a mind map I found on pinterest that looks to be part of someone's planner. I like the way they used the gridded paper to produce a neatly blocked mind map, as well as the illustration they added. I think the personal touches would help make it more motivating to refer back to.

I decide to do a mind map for five goals for 2016. Though actually they're not really specific goals, so much as five things I want to get more into in 2016. I used a mind map to think more about what I want to do more of, or start in these areas, so I can further refine them into habits, small goals and tasks I can do throughout the year.

I am glad I tried working with sticky notes, as it worked out far better for my purposes and the way I think. Mind map structure is a bit difficult for me to brainstorm with, as I don't flow with the branches. I think of a bunch of assorted ideas, then figure out their connections afterwards. So I often have to write a list down to the side and then put them inside connected nodes.

Most finished mind maps in the common mind mapping styles, that have a lot of information, can be difficult for me to visually parse. And I hate to say it, but I also feel they're usually quite ugly, which would put me off if I used one as a final reference (not just for brainstorming). However making a mind map that is visually appealing and very readable, as I've seen other students in this class do, takes extra time and effort to design.

I like the sticky notes method because it's quick and better looking than what I would've tried to design. It is also very easy to add on as you're working without having to redraw things. The biggest downside I've noticed is that it's quite large, you need a lot of space you get a decent amount of information. It is also more difficult to show the connections and hierarchy, I didn't have room on the dry erase board to space things out and draw lines. Next time I'll try using different colors of pens and paper, different sized sticky notes, and add more symbols and decorations, to give a better sense of grouping, flow, and organization. Since it's a general idea board (that I'll continue expanding) that I'll be referring to, for more refined, specific brainstorming and planning, later, it's good enough for me right now. 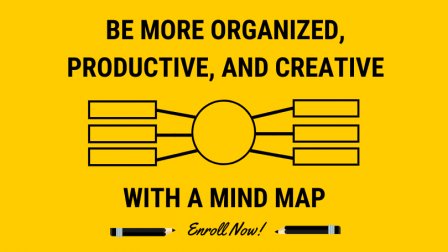 Be More Organized, Productive, and Creative with a Mind Map
Michaela M.