I usually use watercolour and have recently fallen in love with everything gouache - so I thought I'd give it a try. And since I've loved your other classes, Dylan (thank you for all of them!) when I saw this one pop up, I knew the time had come. So I went and got some gouache paint and sat down to do this.

First mistake, I didn't want to get anything too expensive, as I thought I might find out that I'd want a different type or whatever, so I got the cheapest option and then ended up being slightly disappointed with the opacity of the colours, so I blame the paint but obviously could definitely have been my incompetence. (Well, my incompetence it is either way as that caused me having bought the cheapest option. But I'm so used to my watercolours, which are super cheap but very good and have beautiful colours, so I was hoping for the same with these.)

Anyways, I started off with the colour swatch, I had never made one before, so that was a handy practice - I chose Ochre, Crimson and Prussian - twists on the basics.

Here are the results.

This was the IMPROVISED/PLANNED envelope with flowers. Even though I don't really like either of them, I felt the planned was definitely the way to go for me. I don't seem to be a very good improviser and even with every other medium I use, I tend to having to make a plan before I start.

My paint was a little too watery I think, just because it was towards the end and I didn't want to put more fresh paint on the palette because I knew I wouldn't have had the time to use it and it would probably have gone to waste.

In this case, separate was the way to go and I think that's because of similar situation as before - I am simply better when I have planned it out, so when I hadn't outlined or planned the "together" it just ended up kind of all over the place, stems not leading up to the flowers properly and correctly and leaves kind of everywhere. I like order, so "separate" gave me a better chance/space to do that I think.

Here I was quite surprise, as I was convinced that the "drawing" one would end up better as I am a drawer by nature and so it felt like it was going to be much easier. And while it was easier, I think the "brush" one, and the second, just looked more painterly and less chaotic. I really enjoyed this one in particular, because it showed me that I'll need to put the drawing urge aside and approach this in quite a different manner because it is quite different.


WET ON WET/WET ON DRY

Wet on dry 100% - obviously depending on what you're going for but in this case, the colours I had chosen just looked so much brighter, more vibrant and full of energy in the wet on dry situation. Even though I think I may have used too much paint and created more textured surface but either way, that is the way to go for me in future gouache encounters! (not the "too much paint" case, just the "wet on dry" part). Please, don't mind the terrible pots and plants, they do not look appealing at all.

On the following ones - I practiced more in one picture, so I think I like the details, I like that you can easily draw over it with a pen or a small brush to add details, that will come in handy. As well as the layerability.


Overall, I think I need to work more on using the right amount of paint to avoid too watery/too thick layers of paint and as a result dry edges and too much texture etc. I want the smooth opaque result. As I prefer the hot press paper look to the cold press one, I will actually need to go get some more of those and while I'm at it, I'll probably get some better gouache paints as well.

Anyways, the class has taught me a lot, also about myself haha, so thank you for that, Dylan, I really like how down to earth you are. Everything you say is easy to understand and easy to follow, and conveys that you yourself have gone through all of that as well, so that's more relatable I suppose? Even though even the simplest things you paint look fantastic and everything I did was sh**e, but it was a lot of fun and I'll definitely keep going! 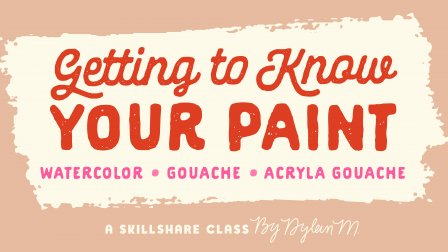 Getting to Know Your Paint: Watercolor, Gouache, and Acryla Gouache
Dylan Mierzwinski